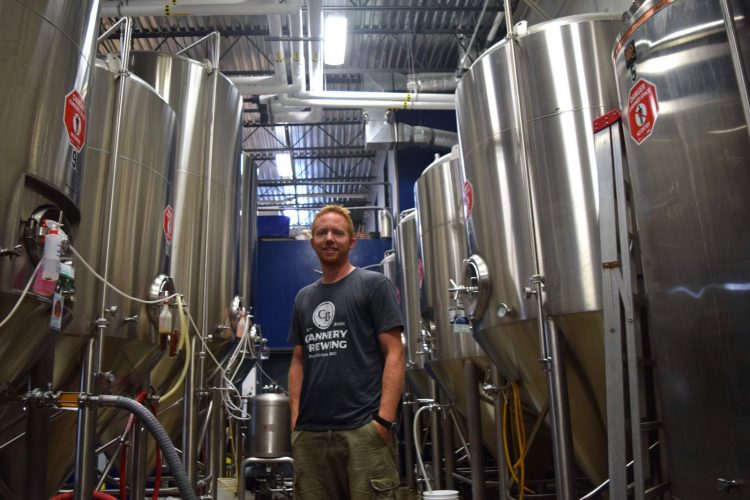 Penticton has been known as a craft beer town for years, and Cannery Brewing is probably the most well-known of its breweries. Having opened in 2001, with extremely stable, community-minded ownership, Cannery has acted as a catalyst for the South Okanagan craft beer scene. As a more or less direct result, Penticton has until lately kept ahead of larger Kelowna in craft beer terms, and the BC Interior’s only CAMRA BC branch thrives here.

Cannery has grown by leaps and bounds but has maintained its “small brewery, big flavour” philosophy and feel. In 2015, the Cannery folks moved into their new location on Ellis Street, and they now have a good-sized taproom and patio where you can relax and enjoy a pint or two. Head Brewer Ross Thompson notes that their focus is on making solid, balanced, drinkable beers, and they certainly hit the mark. With new recipes added for their tasting room,they tend to brew 8 year-round beers plus multiple seasonal and limited releases. If you’re feeling peckish, the taproom has a light food menu, including the most original vegetarian nachos around.

Owner Patt Dyck reflected with us on their role in the Okanagan beer scene. She’s seen a lot of change over the years, and welcomes the other breweries that have come to “join our party” here. “Come play in our sandbox”, she says, because it’s “more fun when it’s together”.

Being very community-minded, The Cannery supports local charities and events, and features local talent with live music every Sunday. When What’s Brewing dropped by, we were treated to a lively concert featuring musicians jumping right up onto the bar. No lack of fun when you’re at the Cannery!

At Cannery Brewing, we make beer with heart. It’s beer made by people who care, not just about beer, but about the people who drink it, about the people in our neighbourhood, and our community. We've been making beer since 2001 in beautiful Penticton, BC. We make beer with flavour, whether it be a German-style lager, a tart fruit sour, a hoppy IPA, or a rich stout. Our taproom is packed with great beer, locally inspired snacks, local wine and cider. We are, in a word, community. We’re all looking for it, and now you know where it is.