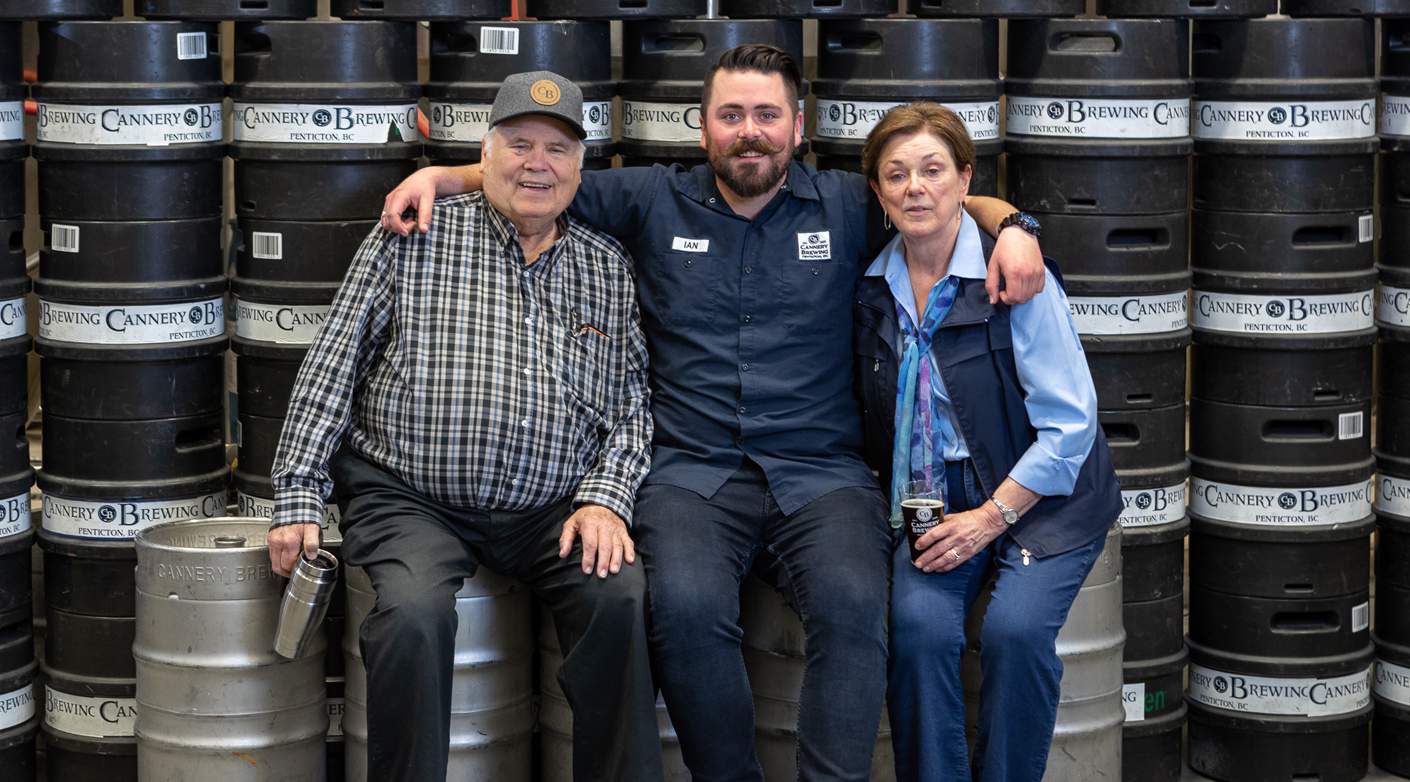 When looking back on where BC’s craft beer revolution evolved, the province’s two largest metropolitan areas come to mind. Victoria’s brewpubs and breweries became a cradle of craft in the 1980s and ‘90s, then during the current decade a new kind of culture developed in the modern tasting rooms of East Vancouver. But the movement is strong in the province’s interior as well. BC’s third largest city, Kelowna, is currently home to nine breweries and about to explode with five more in short order. Then there’s the place down Highway 97 from there that some folks call ‘Beer Town, BC’.
The population of Penticton is only slightly larger than Port Moody’s, but before year’s end it will boast seven craft breweries (including a cluster to rival Brewers Row in a small, walkable part of downtown). Newbies on the block will include Slackwater Brewing as well as Neighbourhood Brewing, founded by the same folks from Yellow Dog Brewing who started it all in PoMo.

It turns out that Penticton, chosen as Expedia.ca’s #2 beer town in Canada last year, has had a strong craft community since there were just two or three breweries. Credit in part goes to its highly respected annual Okanagan Fest of Ale, held for the 24th time this past April. Today, the bond between local breweries is exemplified in the highly active Penticton Ale Trail marketing collaborative [see Kim Lawton’s column].

At the 2019 Fest of Ale, What’s Brewing discovered a trait that several of Penticton’s breweries have in common: they are family operations, with multiple generations strongly involved. In this issue’s cover story, we find out what it’s like for parents and offspring to work together on a business as challenging as a craft brewery, in their own words.

Ian Dyck was born into his job. Ten years old when his parents founded a brewery, Ian was already a hospitality industry veteran thanks to the family’s original business, legendary culinary destination The Country Squire, in pastoral Naramata. Its hometown, in the hills of grape-growing country by Okanagan Lake not far from Penticton, has long been a favourite getaway destination for wine tourists.

Founded in 1980, the Country Squire became a specifically popular focal point for food and wine service. Maitre d’ Ron Dyck was well known as an engaging host with a very respectable wine palate, and chef Patt prepared meals that complemented the regional vino; getting your label in the cellar at the Squire was highly desirable. As the local vineyard and winery industry expanded rapidly in the 1980s and ’90s, Ron, Patt, and The Squire became part of that growth.

“Back in the day, it was a pretty big deal to be on Ron’s wine list,” Patt recalls. “People would leave the restaurant and go buy what Ron had on his list.”

Not that The Squire didn’t serve beer. “We carried the best local beers we could find,” Patt reminisces. “Tin Whistle, Mt. Begbie.” Back in the 80s and 90s, finding craft beer would have been the tricky part.

Not only was the locally famous Squire building Ron and Patt Dyck’s first venture, it was also their home. Son Ian’s childhood began there in 1990.

“Living upstairs above a restaurant: it was a pretty different lifestyle than most kids,” he understates. When he was old enough to pitch in, Ian helped out with things like yard work around the home; it had to look good for guests, after all.

The fourteen-hour workdays a restaurant demands took their toll over the 23 years the Dycks operated the Squire. When Ian’s schedule demanded more trips into the city, Ron and Patt got serious about getting out of hospitality and spending more time with their son before the window of youth closed. They heard the call of craft beer and in 2000, The Cannery Brewing Company opened in a former fruit and vegetable canning warehouse in Penticton. The new business eventually brought parents and son together in ways they hadn’t imagined.

But first, there was a two-year overlap period, during which the Dycks kept The Squire going while the Cannery was open. In that startup phase, Patt remembers wanting a break from writing gigantic cheques. “Somebody go out and buy something for $35,” she’d tell Ron, looking forward to the day when not every purchase involved four- or five-digit numbers.

Asked who fell in love with beer first, Patt says, “It was both of us, certainly. It had so much flavour and seemed like it had so much potential. The process of this thing that’s alive, and with so few ingredients. Small changes in brewing temperature or time made such a difference to the flavour that was coming out in the end. It was pretty exciting, and it was a change from wine. There were getting to be so many wineries, it was nice to get involved in another industry.”

The team at Cannery Brewing comprises a large extended family for the Dycks. Jill Hart, a family friend who babysat young Ian, came to work for Ron and Patt at the Country Squire and still pours beers in the Cannery taproom today. Taproom Manager Max Rutherford is Ian’s best friend since school days.

In the brewery, Ian Dyck works closely with bright young Head Brewer (and fellow co-owner) Ross Thompson in shaping the current direction and next generation of Cannery Brewing, alongside community-oriented Marketing Director (and What’s Brewing columnist) Kim Lawton. Outside the brewery, Ian and Kim have served on the executive of CAMRA South Okanagan, a branch of BC’s pre-eminent beer advocacy society which has actively supported local beer education and homebrewing activities. Long-time CAMRA SO President Lawton has also been particularly pivotal in moving the Penticton Ale Trail forward.

Cannery hosts BC’s craft beer industry every year during the city’s annual Fest of Ale. The business has become the bedrock for innumerable contributions to the local community. It’s not a stretch to say that Penticton’s remarkable beer community spirit can in significant part be attributed to people who are part of the Cannery clan.

That amusingly realistic anecdote about a youngster’s perspective speaks to Ian’s mature level of curiosity about the family’s business operations. Of course, a brewery owner of any age can identify with the sentiment expressed. Patt describes their old bottle labeller as the most ridiculously sci-fi looking and heaviest thing ever. “A forklift could barely carry it,” she insists.

Once that labeller was safely set up and working with no serious casualties, packaging became the order of the day. Ron would fill up their Honda Odyssey with Cannery’s classic 1L swing-top bottles (complete with decorative ribbon; see photo!) and administer his charm to pub owners and retailer buyers around the province. Ian, following in his father’s footsteps years later, found that sales contacts would regularly ask about his dad and had strong memories of meeting Ron a dozen years ago or more.

When the brewery was young so was Ian, which made for some comic situations. For instance, the Naramata Faire, an annual August event, had a beer garden. Minors weren’t allowed, so Ian and his cousin would hang out in a fenced-off channel just outside, like puppies in a dog run.

Then there was the time that Ian had karate class on weekends, held in the Penticton Trade & Convention Centre complex. The Okanagan Fest of Ale is held in that same PTCC each April, so Ian had to deal with the inconvenience of his karate class being moved because of a bunch of breweries. As we come full circle, the former karate kid is now the boss at one of the Festival’s cornerstone vendors.

As Ian got older, he was able to contribute more around the brewery outside of school time. There were bottling weekends where he helped with labelling. When he could drive, he did countless beer deliveries in Skruffy the cube van, long before he was old enough to drink.

Eventually, Ian and his classmates grew old enough to imbibe, and of course, the guy who had access to beer was guaranteed to be popular. “In high school, all of a sudden I was getting invited to all the parties,” Ian recalls. Natch, everyone wanted to see him walking up with a keg. Mom clarifies that he wasn’t necessarily always allowed to do that! But “it was great to be able to share something my family made,” he proudly relates.

“Growing up in the Okanagan, we were like missionaries; we had to teach craft beer to people”, he says. Later, Ian went off to college in Victoria, where the beer culture was miles ahead.

“Ian has a really good palate,” Patt opines. “He spent his college beer drinking years immersed in the craft beer capital and came back with all sorts of ideas for great things.”

Back in the day, young Ian was of course paid for helping around the brewery and can claim a Dyck family first: the privilege of cashing a Cannery paycheque, well before his parents had that luxury. Today, Ian has a different kind of stake as an owner himself.

His business card lists his title as “Suds Slinger”. Asked what he considers his role, Ian says, “a little bit of everything. I manage the sales team.” Before that, he paid his dues as a roving sales rep. “I was on the road for quite a few years when I was selling beer,” he recalls. A father himself now, he values the ability to be home more.

Asked if she had always wanted Ian to end up in the business this way, Patt says she hadn’t really thought about it. When you’re family, life just sort of happens, and the next thing you know you’ve started a business that can provide for not only your offspring, but theirs as well.

It all just sort of happened, just like it was somehow always meant to be.