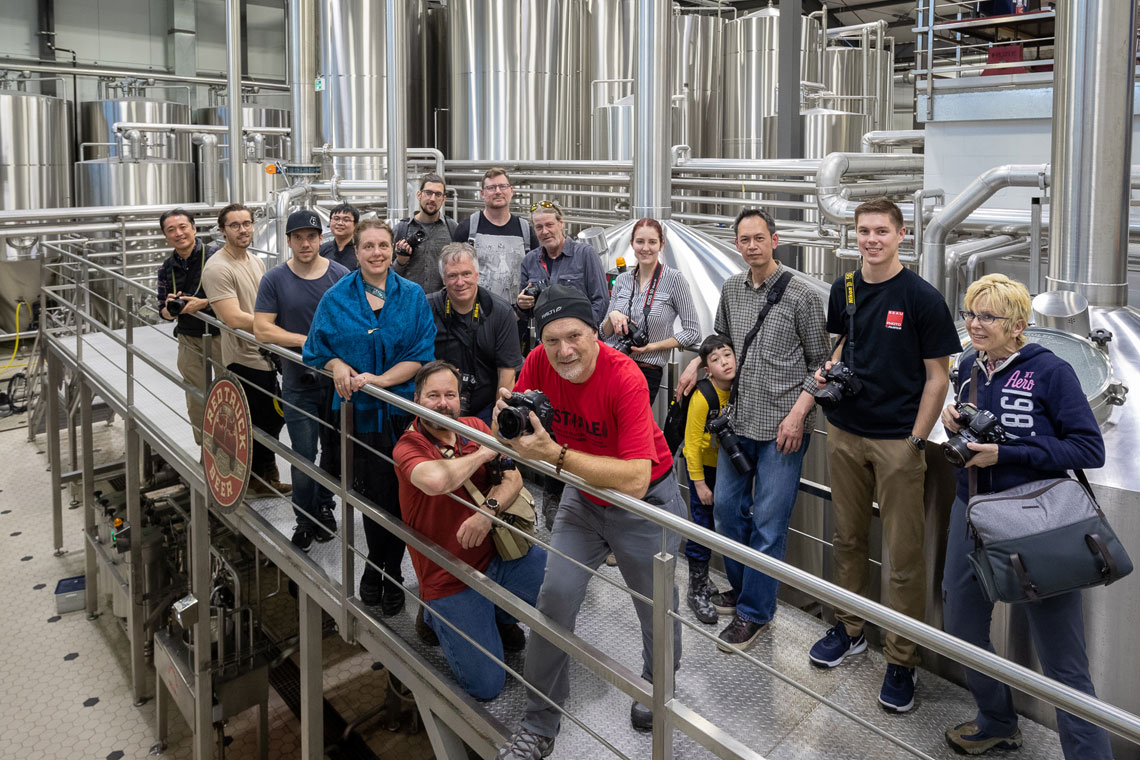 In the Winter 2018 issue of What’s Brewing, I mused about organizing a photography-and-beer event to inspire all levels of photographers to document and shoot craft breweries. After the article was published, my professional camera supplier told me they had been thinking about a similar project. Synchronicity! The next step was to find a large enough brewery that would be agreeable to invasion by equipment-laden photographers.

Beau Photo supplied several recently released cameras and lenses from their extensive rental department, for participants to share. The camera geeks felt like kids in a candy store. Red Truck Beer Company allowed us guided access to the brewery. The combined effect was Nirvana.

Our meetup started at 5:30 pm with a 45-minute shoot of the iconic vintage red pickup trucks outside in a light drizzle. One is their first delivery truck, a 1946 Dodge that owner Mark James named Old Weird Harold. We then moved inside to enjoy a pint and some delicious appies from their newly-released menu. I gave an introduction to the history of craft beer in BC, particularly the Brewery Creek area of East Vancouver.

Red Truck Beer sits on what was the estuary of the stream emptying into False Creek, before the area East of Main St. was filled in. It drained from Little Mountain and ran through Tea Swamp, and was a reliable water source in Vancouver’s dry summers. This area was the site of the city’s first suburb, Mount Pleasant. Back in the 1890s, the stream was lined with breweries, soda pop companies, and other industries using it as a water and power source. As time moved on, so did the breweries, and Mount Pleasant went through a downturn. This has all changed again, and a number of award-winning breweries again thrive in the neighbourhood.

Built in 2015, Red Truck Brewing’s beautiful Truck Stop Diner and Brewhouse harks back to the past with its classic look. It’s bigger than it looks from the street, too. Along three quarters of the perimeter of the taproom, there is an open five-story view of the brewery. Descending into the working area (where beer is made 24/7), the photographers got a sense of the size of the tanks and the complex operation of a modern brewery. We even had the brewer pose for a few glamor portraits. Everyone went away with a feeling of great value for an evening where two industries shared their shiny wares for all to marvel at.

Our next event, scheduled for Wednesday, July 3, at 5:30 p.m., will again be hosted by Beau Photo, Red Truck Brewing, and Nikon Canada. You can expect to see some amazing new camera gear to try out.

My dream is to for photographers of all levels to photograph breweries all over B.C. By the end of the year, there will be an estimated 175 craft breweries in this province. These are historic times. Maybe we can establish a community-shared resource where photos can be stored of each brewery.

Photos from the Craft+Camera event: