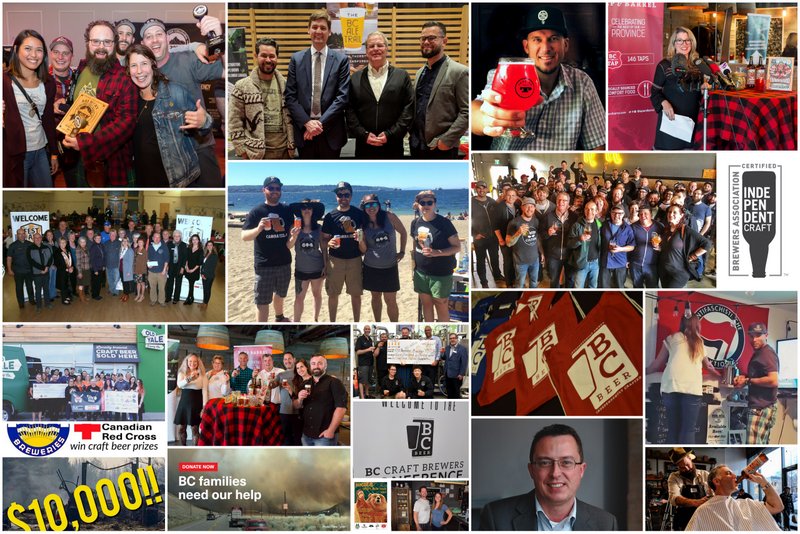 Last year, What’s Brewing produced an issue themed Year In Review which listed many of the top BC Craft Beer stories and events of 2016. Once again in 2017, we list off the key BC beer news stories that drew our attention over the last 12 months. We also profile the Top 3 BC Craft Beer Newsmakers of 2017 as chosen in our beer writers’ survey.

The year 2017 probably won’t be remembered as a happy or joyous year from a global perspective. But that’s just one more reason that being a BC craft beer fan is a great idea. Not only is learning about and experiencing craft beer a rewarding lifestyle pursuit, but it’s a source of better than average news.

At least it was in 2017. See, we know this because we actually keep track of what happens in beer news each year. We then make a shortlist and get some of the knowledgable beer types in our community to help pick the most compelling stories of the year. We did it again this year, and as a result we’re pleased to announce our top picks, along with a 2017 timeline of news stories. Here’s what our insider poll results say:

Let’s take a closer look at that first item.

On December 19th, 2016 the Agricultural Land Commission (South Coast Panel) released a decision not to renew an approval of Persephone Brewing’sapplication to operate on ALR land. Thus began a long year in Purgatory for the Gibsons-based farm brewery.

After a site visit, the Commission reported that it felt that Persephone was more of a “processing facitilty” and not a true farm operation, because the bulk of the material going into their beer was barley not grown on their farm (where, amongst other things, Persephone was growing the hops for their beer). The essence of the problem was that, other than water, beer’s primary ingredient is grain, which Persephone was not in the business of growing (nor could it grow enough to make its beer if it tried). Wineries on ALR land, on the other hand, were held to a different standard when it came to sourcing material.

Soon the story was picked up by the mainstream media. Persephone was actively speaking out about its desire to find a solution and keep operating on ALR land. It was clear that there was public support for this. This decision was perceived as unfair by Persephone’s fans in the BC beer community. On January 14th, veteran beer blogger Barley Mowat published a blog post that called for readers to send a letter to the BC government in support of Persephone, petition-style. By March, an actual petetion was underway, which eventually garnered 4,170 signatures.

During Spring 2017, after almost a decade in power, an astonishingly close provincial election result put the BC Liberals on the brink of losing their majority government. Once the fate of the legislature was determined, Persephone started to pin its hopes on a change in leadership in Victoria. Ultimately ther were signs that the new NDP government’s Ministry of Agriculture was coming around to addressing the issue. What’s Brewingwas on hand to witness B.C. Agriculture Minister Lana Popham’s remarks in an October press conference during which she hinted about changes coming down the pipe.

Sure enough, in November the official announcement came that ALR rules aimed previously only at wineries (and cideries) would now be extended to other alcohol producers as well. Persephone’s year-long walk in the wilderness was over.

Best of the Rest: a timeline

We’ve got much more in our retrospective. Here’s how it all happened over the past twelve months.

Fnd out which newsmakers were voted the most compelling of the past year in our BC craft beer writers’ survey. The results are here

BC craft brewers know how to share the love

Will There Be A BC Liquor Price Review?

Newsmakers of the Year Photo Gallery