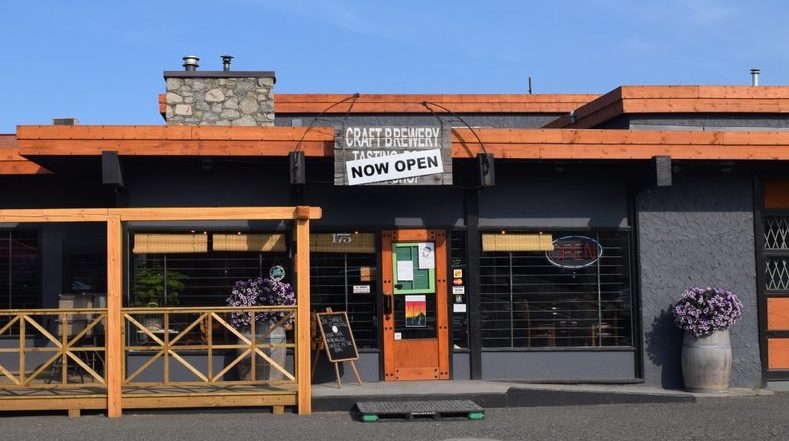 Signs seen on Highway 97 in and around 100 Mile House during July/August August 2017.
Main image above: Jackson’s Social Club and Brewhouse

How BC’s worst-ever year for wildfires affected BC beer

This story is a sidebar addition to our main story on North Central BC breweries.

Summer is usually the busiest season for a tasting room and brewery, but tourism-related visitor numbers in North Central BC took a hit in 2017 due to road closures and travel cancellations. The reason: the single worst year for forest fires in British Columbia’s history. As we toured the area, we couldn’t help but notice the wildfires’ effect on local craft businesses.

Red Collar Brewing owners David, Annamarie, and Lara Beardsell all noted that they were escaping town to avoid getting smoked out that weekend. Pulling into Kamloops in early August, we could see–and smell–why. People were staying indoors to avoid breathing the smoke.

At the Big Horn Hops farmyard outside Kamloops, GM Ian Matthews noted some concern that the smokiness of the sky and lack of sunlight might affect their 2017 crop—a reminder that beer is an agricultural product beholden to mother nature.

In Quesnel, Barkerville Brewing became an active leader for wildfire relief, donating partial proceeds from their storefront sales to the Red Cross. Owner Russ Ovans notes that they raised over $1800 for the cause during summer 2017. This, despite the fact that tourist traffic was signifcantly down during this time.

In addition, they made a collaboration beer with Crossroads (Community, appropriately a smoked alt), and 100% of the proceeds go to the Red Cross relief fund.  Many of Barkerville’s suppliers supported the cause by donating the supplies used to make the beer.

In 100 Mile House, Jackson’s Social Club and Brewhouse was closed for two weeks in July when the town was evacuated. What did brewer Keith Jackson do? Why, he travelled up to Valemount and spent some time volunteering at Three Ranges!

At Jackson’s, Alanna, who works the tasting room part time, noted that a lot of folks headed south to Kamloops and even the Lower Mainland during the evacuation. She doesn’t live in town and wasn’t forced to leave, but she wasn’t immune to the effects of the evac. Not only did her work shut down, but her boyfriend’s good friend lost his house.

Living in nearby non-evacuated areas gave people like Alanna the unique self-sufficiency experience of living near a ghost town. Gas ran out in the area; Alanna’s pretty sure one of the small stores in her town outside of 100 Mile took advantage and raised some of their prices. A trooper, she took it in stride.

In addition to those mentioned above, craft beer businesses around BC were active in the fundraising effort. Brewers and craft fans gathered at Vancouver’s 12 Kings Pub for a fundraiser in August. Then, at the beginning of September, both Chilliwack’s Old Yale Brewing and BC Craft Breweries’ Tim LaHay announced that they had reached over $10,000 in wildfire relief donations. See our feature story on Tim for more about his community leadership.

For more about the North Central BC beer scene, see our main story, Roaming the Beer Frontier in Northern BC.

Roaming the Beer Frontier in Northern BC