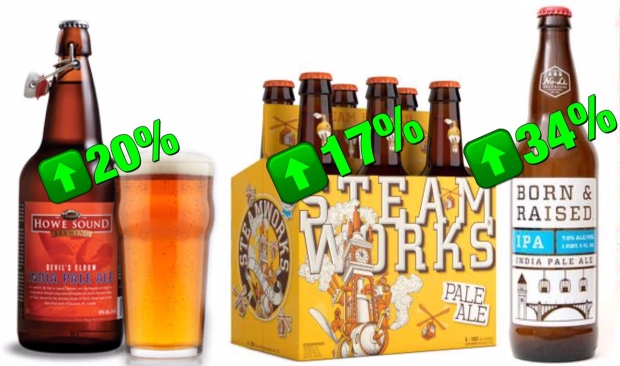 So you like craft beer. Maybe you even work in the industry. Either way, you probably care about what you have to pay for the occasional libation when you choose to consume such. (No judgment if “when” is more like, “when don’t I”).

Booze costs a lot, and it’s only gotten more expensive in recent years. Industry watchers are aware of the reforms that have taken place this decade as part of BC’s generations-long post-prohibition promenade toward liquor policy modernization. Regardless of one’s political leaning, one has to acknowledge that certain things changed under the BC Liberal government that helped propel our society’s craft beer awakening, especially in March 2013. Later that year, Parliamentary Secretary John Yap submitted a long list of reform recommendations, many of which were subsequently followed up on. But that didn’t mean good beer got cheap; many of us noticed the opposite.

This week, Attorney General David Eby and the BC NDP took the first steps towards their own liquor reform plan, by naming Vancouver attorney and liquor law expert Mark Hicken to steer the formation of an industry-based review panel. Mark is a wine guy, and so far, the buzz around pricing issues seems to involve bars and restaurants, especially those serving drinks made spirits, but let’s hope that beer will also take its rightful place on the agenda. After all, it’s the world’s most popular adult beverage–and the demand for BC-brewed craft suds is not slowing anytime soon.

Featured in our Newsroom today are a handful of articles about this week’s news. Pulling together an executive summary from a few of them, we get:

Longtime liquor-policy lawyer and Vintage Law principal Mark Hicken [will] be an adviser and…help suggest names for the composition of the panel. The panel will include manufacturers of wine, beer and spirits as well as retailers. His expectation is that the panel should be established early in 2018.

Glen Korstrom for Business in Vancouver.

Review ordered, aimed at bringing BC liquor prices down

“Anybody looking at this thing is going to come to the conclusion that the price of alcohol in BC is way too high… Alcohol in BC is more expensive than anywhere else in North America. That’s my belief and that’s my experience. It’s my business and when I’m in other places in North America, I generally check the price of alcohol. It’s not comparable to here.” Teti says the simple solution is for BC to have Alberta’s flat tax system.

That is music to the ears of industry advocates such as Restaurants Canada that have been vocal in their opposition to a Byzantine liquor branch scheme that offers wholesale prices to private liquor stores but charges higher prices to bars and restaurants.

“Customers — especially visitors from the United States where markups are nowhere near as big — can’t believe the prices we charge for cocktails, but it’s not the bars gouging them,” he said.

B.C.’s grade in Restaurants Canada’s Raise the Bar report card released this week slipped from a C+ to a C, largely due to above-wholesale prices paid for liquor by hospitality businesses. Alberta earned the country’s highest grade, a B, as the only province with a flat tax and “true wholesale pricing” on all classes of liquor.