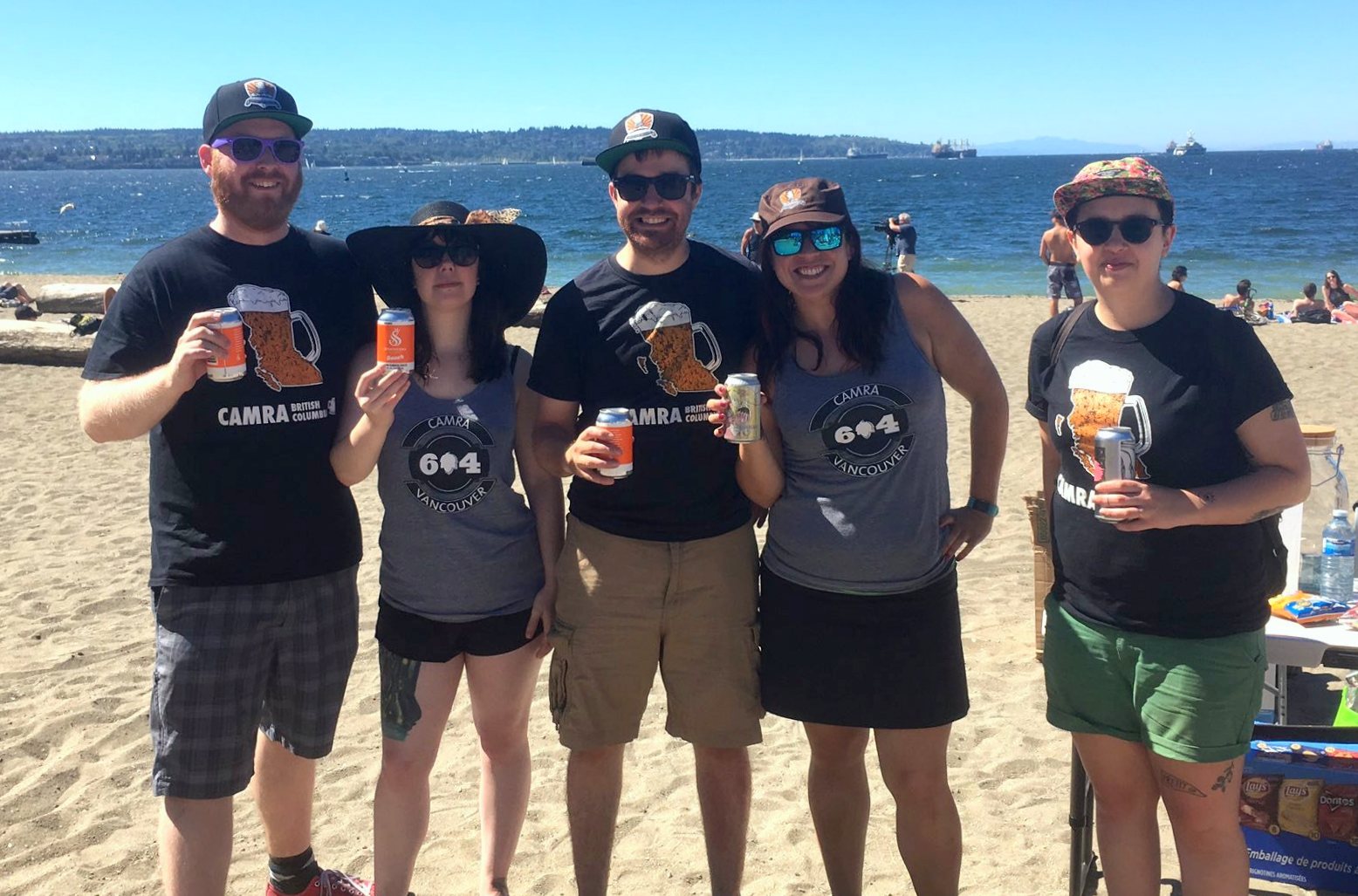 Perhaps you’ve heard that there was a ‘Picnic Protest’ at Vancouver’s English Bay today, organized by CAMRA Vancouver, with the blessing of CAMRA BC (The Campaign For Real Ale Society of British Columbia), called “Beer on the Beach“. In CAMRA YVR’s latest monthly newsletter, President David Perry had outlined that the event was upcoming, organized in response to a significant amount of interest in ‘relaxing restrictions on responsible public drinking’, especially amongst CAMRA’s younger members.

David likes to point out that some of us at What’s Brewing belong to the “grey hair” old-timer crowd. I’ll admit that public drinking hadn’t been a personal priority for me; a lifetime of acceptance that “this is the way things are” has numbed me and probably many others to the idea that there is any other way. But there is. The other day, my friend Rick Green was describing his most recent travels to China, and happened to name an ideal local beer to drink when hiking along the Great Wall. My first reaction was, “you can do that?”

Not here you can’t. Whether or not you consider it critical to the needs of our society, loosening restrictions on alcohol consumption in BC is a trend. Outdoor consumption is on the table, and its time is coming (especially for ‘soft alcohol’ like beer, I would think). CAMRA Vancouver has probably helped it along with their well-planned and organized public demonstration today. They’ve also likely helped CAMRA itself, because in recent years the Society has been searching a bit for its identity. Its own leaders have admitted in writing that the ‘Campaign’ in CAMRA has been floundering for a while, mostly due to the fact that our movement has been so successful that some may think it’s no longer necessary. A focused, high-profile, smartly-run advocacy event like today’s “protest” is exactly the shot in the arm that the Society needed.

It will have its critics. Some may say that there wasn’t enough advance notice. I’d say that’s a good thing, because the intent was never to conduct a party-style beer festival. The demonstration was scheduled from noon to 2 PM, a fairly short window, but one that underscores the thinking that went into this. Just enough time to make a point, not enough time to get people drunk. Keep it tight, on message, give the media what they need, then end the window of responsibility.

Speaking to Vancouver branch President David Perry after the event, I was pleased to hear that things went quite well. The Vancouver Police Department, who had been advised prior to the event, just ran its normal patrols. One set of officers went by and didn’t engage the event; they just took a peek at the well-behaved crowd and moved on.

Attendance was thin at first but the numbers started to fill out around 1:00 PM, reaching approximately 45 attendees. People, including families with children, cycled in from Burquitlam and came down from all over Metro Vancouver to make a statement. The executive was concerned that everyone would stay home due to fear of fines, but it turns out, as always in society, there are more than enough brave souls available to carry the load for the timid and skeptical.

This harkens back to how the Craft Revolution was begun. Back when almost everyone in North America was happy to consume whatever Big Beer and other multinational food and beverage conglomerates presented to them, a few well-travelled pioneers rebelled by pushing for changes to legislation in various North American regions, leading to legalization of homebrewing and birth of the microbrewing industry. Some of us may be fairly complacent about the outdoor drinking issue, but that doesn’t mean future generations have to carry on thinking the same way.

What’s Brewing was created a generation ago by CAMRA members. It has always operated at arms-length from the Society itself, giving it the editorial freedom to speak up about the job CAMRA executives are doing. Whatever happens from here out, I’m giving today’s demonstration two thumbs up. David admits that this wasn’t the easiest thing to do; as he says, “when I woke up this morning, my stomach was in knots” knowing people could get fined. But months of behind-the-scenes thinking and preparation paid off. Whether he returns for another term next year or decides he’s done enough, as of this writing I’d have to say that David can look at his (and his executive’s) accomplishments in 2017 with a lot more pride after today.