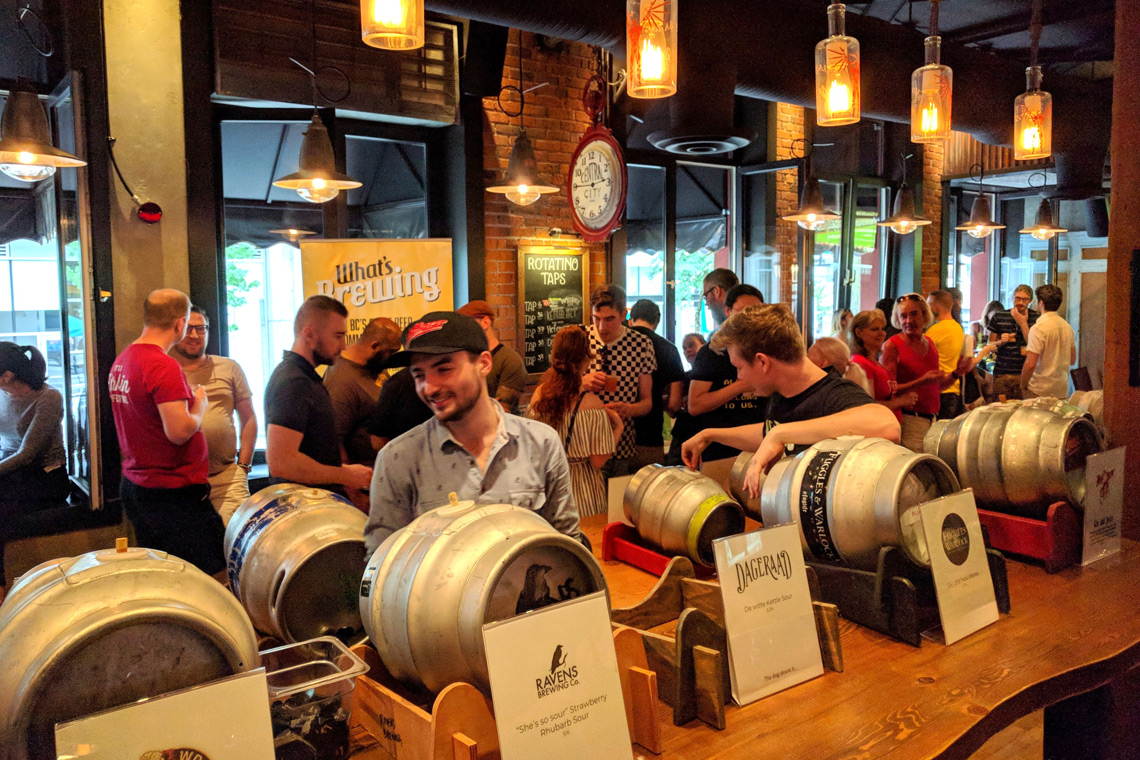 In 2013, I became president of the Vancouver branch of the Campaign For Real Ale BC (CAMRA BC), with a mandate of modernization, greater consumer advocacy, and membership growth. I also had a private agenda: to advance “real ale” in BC by curating cask festivals, promoting cask nights, and supporting establishments with a cask focus. I took the “RA” in “CAMRA” to heart.

Beer in BC has generally been served in artificially-carbonated kegs rather than naturally-conditioned casks. Craft brewers keen to show off their art have produced a few casks, particularly at brewpubs and occasionally at beer festivals. (CAMRA BC has always supported cask events but, unlike the original CAMRA UK, was never dogmatic about only promoting cask-conditioned beer.)

By 2013, cask nights were everywhere. Increasing the size and scope of the CAMRA Session Cask Festival may have boosted the momentum of other cask events such as the massively popular biannual Central City Cask Festival and Hoppapalooza at the Alibi Room. We helped increase the attendance of cask meetups at the Railway Club, Yaletown Brewing, St. Augustine’s, The Whip, and others. CRAFT Beer Market, Tap and Barrel Olympic Village and Main Street Brewing opened with casks on the menu; even Parallel 49 Brewing put a beer engine in their tasting room. Things seemed rosy for casks when I left CAMRA after two years to pursue my next phase in cask domination: opening Real Cask Brewing at Yeast Van’s Callister Brewing Co.

I spent my last farthing on casks, hops, and sparklers, bringing a mix of classic real ale and some new-world cask craziness to Yeast Van. (Huge thanks to everyone who contributed to my Kickstarter). Word got around to the real ale enthusiasts of the Pacific Northwest that something was happening. A number of bars approached me to have casks on tap but I was careful to not overreach our miniscule (7 hectolitres per month) capacity or leave the Callister taproom short. I also politely refused to supply those who had no appropriate equipment or those lacking interest in, or knowledge of, proper cask management.

I offered training where possible, but as I learned during my brief time as a publican in Vancouver, staff turnover is a massive problem. (I do love to teach, but enthusing about a thousand years of brewing history to largely-uninterested servers every other month is not exactly fun.) I decided to keep only a few key taps and ensure they were well-served and maintained.

During my three years at Real Cask, I only occasionally supplied cask nights at other places. Some places did not serve the cask the way I felt it should have been done (see my rants in early issues of WB). I had my casks at festivals that passed my quality tests, but these dwindled in number and scope. Usually the casks for these events were created from beer already on tap at supplying breweries, and some establishments expect them for free. Economically, cask nights weren’t profitable for me once I considered all the costs. Hopefully they acted as an advertisement for the Callister tasting room, where I served cask beer the way I believe it should be done. However, as everyone knows, exposure doesn’t pay the bills.

In my last year with Real Cask (2017–2018), I noticed a sharp drop-off of cask nights around Vancouver. When the Alibi Room quietly phased out their cask program, the writing was on the wall. Yaletown, CRAFT Beer Market, Railway Club, St. Augustine’s, even Sundays at The Whip, have all ended in quick succession. Parallel 49’s new Street Kitchen has 40 taps, but none are for casks. A few establishments keep their beer engines as breweriana furniture, but those previously proud pumps are now just dusty relics of a now unfashionable boondoggle. I must, however, give serious props to those who nevertheless persist in doing great cask work, such as Sundown Brewing, my old friend Bill Riley at Main Street Brewing, and Moody Ales.

Cask festivals are now also few and far between. The lovely folks at Tri-Cities Cask Festival Society enjoyed great success but have switched gears to open their own brewery in Port Moody; at the time of writing there are no cask events scheduled. Central City’s semi-annual cask events have bounced around two different locations but don’t attract as many fervent cask fans as in the past. The only other cask event in the GVRD is Caskapalooza at CRAFT Beer Market.

We just wrapped up the always excellent BC Beer Awards—not a single cask there either. I for one feel it’s only a matter of time before cask events disappear from the calendar altogether.

For many brewers, casks are a big headache; they resent having to fill pins or firkins and come up with ways to make them different from the base beer they’ve spent months or even years perfecting. As most are trained in the art of keggery, some resent the unpredictable nature of casks. There’s a longtime dirty secret of casks being filled with carbonated beer from a keg. More recently, there’s a trend of blending two beers, most likely keg dregs, into a cask. I’m not sure what the idea is, but it smacks of laziness and is the antithesis of real ale.

While casks fade into obscurity in the Lower Mainland they remain in some measure around the province, but as with many beer trends I have a sneaking suspicion that over time they will follow GVRD’s lead. Kegs and cans will continue their march of destiny over the real ale that CAMRA UK was founded to protect almost 50 years ago.

Changes in taste might be one reason for the decline. Drinkers whose preference leans to lager, cloudy IPA, or sours seem to have no interest in casks. Another reason might well be the North American obsession with carbonation—something casks can’t do well. There’s also a consistency problem. There have been plenty of bad casks; even the best festivals only had about a 75% strike rate in my opinion.

But I think the main problem is that the poor cask handling at many pubs and events has made people think they don’t like casks. And that’s a perfectly reasonable response to many of the chewy, lumpy abominations that have been served.

I tried my best, but it seems casks are on the way out. If there’s a positive to take from this, it’s that there’s so much variety now (in both beer styles and events) that a cask, previously an interesting and unique creation, simply gets lost in the shuffle. They had a great run and while they’ll persist in a few places, their decline is well underway. Farewell, my firkin lovelies.