Part I: A Crash Course in Cellarmanship

In what I plan to be an ongoing series I hope to further broader knowledge about real ale (cask-conditioned beer), its history, practice and relevance. This first part is about the casks used to condition and serve real ale. There are two types of casks, wood and steel. 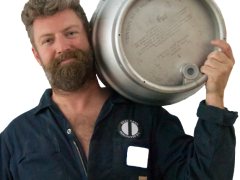 These days, wooden casks are primarily used to flavour and age beer. This is in fact a rather new practice. While beer has been stored in wooden casks through history, these casks were either charred or sealed with pine pitch to stop leaking and to prevent the beer from taking on the wood flavour. However with a long tradition of wood-aging in both wine and spirit production, the cross-over to bring in those flavours to beer was inevitable.
Wooden casks for flavouring and aging can either be new or used. New wood is particularly expensive, since both wine and spirits take up the bulk of the market. Used casks cost much less and will impart flavours from the previous use. With sour beer popularity on the rise, old wine barrels are often used to develop these flavours, and there’s no real limit on how long these can be kept.

Because of their size and fragility, wooden barrels full of beer rarely get moved. They are also rarely completely sealed up (using a bung and airlock rather than a shive). Once used for beer, these re-used casks are rarely filled again and usually get thrown away or recycled.

Steel casks have more in common with kegs, in that they are for transporting and serving beer. It is these casks that the rest of these articles will be covering. The distinction between kegs and casks is important. Kegs are sealed and pressurised with CO2 at all times. They require an appropriate coupler and gas source to push the beer out. Kegs are force-carbonated, and ideal for many styles of beer. Casks, on the other hand, have 2 apertures, which after filling are sealed up with disposable bungs. Carbonation (or ‘conditioning’) happens naturally from the live yeast that is present in the beer. The pressurisation comes from the CO2 building up in a pressurised vessel. Cask beer is served by piercing one of the bungs with a tap. The best analogy is that a keg is like a can of beer but a cask is like bottle-conditioned beer (in a very big metal bottle!). More on this in future articles.

Steel casks typically come in 3 sizes: 20.5L (pins), 41L (firkins) and 82L (kilderkins). Historically, pins were long and thin, like a 20L cornelius pop keg with the shive in the top and the keystone near the bottom so they could be served vertically; nowadays they are just smaller versions of regular firkins. Pins fell out of favour in the UK due to the percentage of loss in the lees (the yeasty muck at the bottom) but have become popular in Canada as 20L is a good size for cask nights and homebrew. 40L firkins are the most popular option around the world; they are a manageable size and can usually be drunk before they turn sour. 80L kilderkins are used in the UK but virtually unknown in North America as their volume, bulk and weight make them much less practical.

There are larger sizes including the 164L “barrel”, the 245L “hogshead”, the 327L “Puncheon”, the 491L “Butt” and the 1023L “Tun”. However these rarely exist as anything other than a hypothetical unit of measurement – for example beer and crude oil output are measured in barrels, although there’s differences between US and UK measurements.

Casks require disposable seals to be used: keystones, which go in the end and get broken by a tap, and shives, similar to a bung but with a break-away centre that gets punctured when venting.