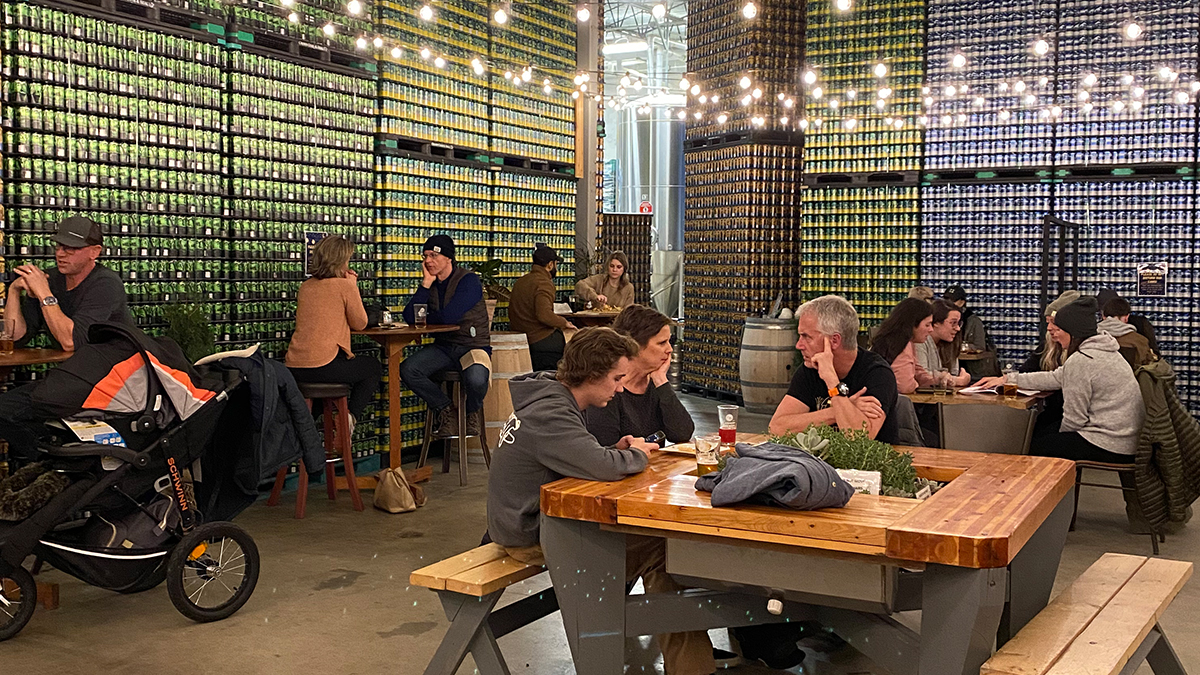 Despite the challenges of COVID-19 restrictions, regulations and rules, the South Okanagan craft beer industry has adapted and pivoted. I’m very proud of all the ways that our breweries have innovated and changed their business models. The passion of the craft brewing community is strong and has fueled creativity and innovative thinking. It’s exciting to see all of the changes to our craft brewing scene.

One of the highly anticipated changes to Penticton’s craft beer scene is the opening of Neighbourhood Brewing, which recently opened. Neighbourhood is Penticton’s 7th brewery and one of BC’s newest breweries. The stunning purpose-built brewery building is 10,000 square feet, spread out over 2 floors with a 25 HL brewhouse built by Ripley’s Stainless in Summerland. They have a 150-person patio which features a big outdoor fireplace. Plan to stay awhile as they have 30 taps including Neighbourhood’s beers, beer from their sister brewery Yellow Dog, guest taps, local cider and wine.

There are also big changes at Penticton’s original brewery, Tin Whistle Brewing. After celebrating their 25th anniversary this year, the brewery now has new owners, Tim Scoon and Alexis Esseltine. Tim and Alexis are excited to continue the legacy that Lorraine and Mike Nagy built with Tin Whistle. Tim and Alexis have a number of new things in the works including brewing their first new beer in December for release in January. When you visit, plan to enjoy a beer in their newly expanded indoor tasting room.

To deal with reduced capacity, Bad Tattoo Brewing in Penticton decided to cover their patio with a heated tent to expand their seating for the winter. It will be connected to the brewery building so they can have the garage door open to essentially offer an extended interior.

Cannery Brewing transformed a section of their brewhouse into a beautiful new indoor seating area. Floor to ceiling pallets of empty cans enclose the welcoming space in the Cannery Brewhouse that blends the warehouse atmosphere and high ceilings with warm lights and a friendly vibe. Once restrictions allow for it again, the return of Sunday night live background music will further enhance the experience.

Having a large space where guests can be physically separated in different sections, Slackwater Brewing plans to add back programming such as Tuesday trivia nights, live music, and smaller brewmaster dinners when permitted. They recently launched a newly expanded winter menu including a Little Slackers menu, and delicious coffee-based specialty beverages made with collab coffee beans from local roaster Seis Cielo Specialty Coffees.

Highway 97 Brewing is busy working on their expansion plans for their move to their new larger, downtown location right across the street from Cannery Brewing in spring 2021. Once they are in their new location, Penticton will feature 5 downtown breweries all within a quick walk from each other.

Firehall Brewery in Oliver added an enclosed and heated tent to their large patio. This provides a comfortable space that is partially open to the outside air. They also rent out time around propane firepits, which customers can book online for their household bubble. They also plan to host some limited capacity events such as trivia once allowed, and an expanded food menu with daily specials.

Summerland’s Breakaway Brewing took over space in the building beside them to create a newly expanded seating area. The new space doubled their capacity and now accommodates up to 48 guests. They also completed their production facility and have started brewing in-house. Their beers are exclusively available onsite. They have a number of new beers planned throughout the winter that can be enjoyed alongside their new taco menu.

Since now is not the time to travel, and you can’t visit Canada’s Craft Beer Capital, enjoy a taste of Penticton with a number of delicious winter beers available around BC. Bad Tattoo has 2 new winter beers coming out in December, their Red Plum Winter Sour and Nordic Nights Winter Ale. These join their recently released Peanut Butter Chocolate Porter.

Cannery Brewing will have a variety of stouts to keep you warm this winter. The Darkling Oatmeal Stout and Heist Maple Stout are both back now in 473ml cans. Also, watch for the return of the Kindling Imperial Stout brewed with coffee, chocolate, oats and coconut. It is available in 473ml cans at private liquor stores around BC just in time for Christmas.

Kim Lawton
Kim Lawton is a veteran travel writer who has contributed to many publications. She is a craft beer fan, a long-time supporter of the craft beer movement, President of CAMRA South Okanagan, the Marketing Director at Cannery Brewing in Penticton and the Okanagan correspondent for BC Craft Beer Month. Kim writes the Beers, Beaches & Breweries column for What's Brewing.