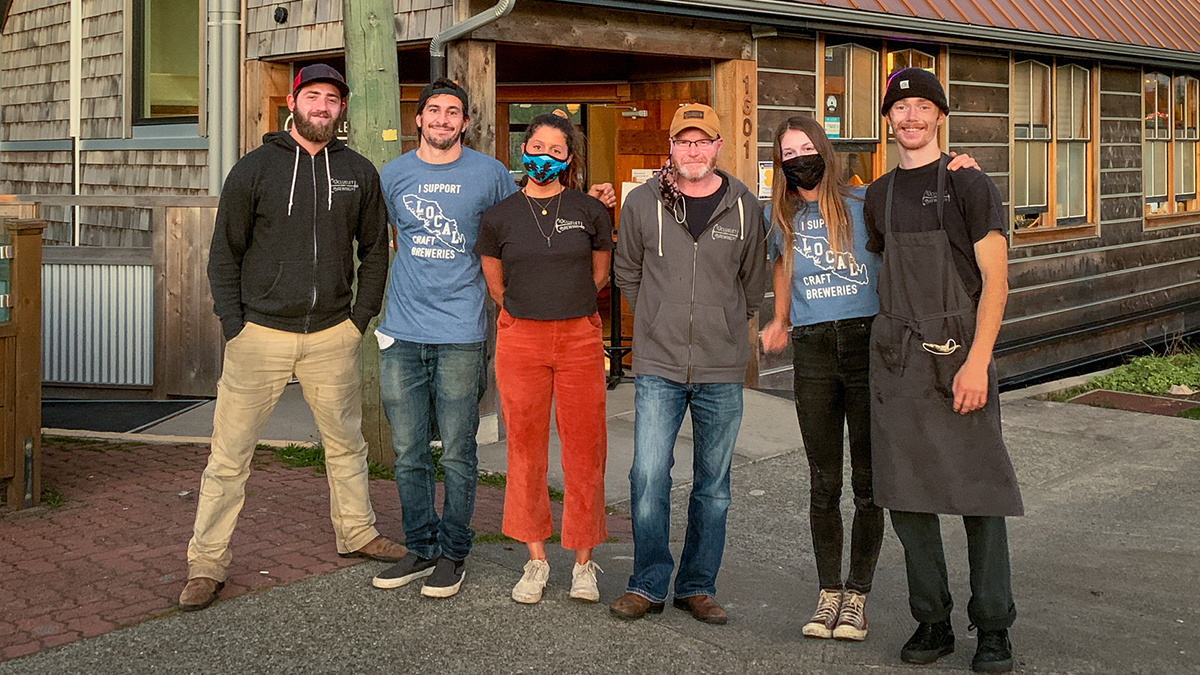 Have Camera Will Travel | Regional

In these times of social distancing and closed borders, we still have opportunities to explore in our own backyard. If you live in the Lower Mainland, this is quite easy. I am going to take you on a four-day trip to Vancouver Island’s west coast to check out new arrivals in the craft beer industry, easily and affordably. It’s a great mini-vacation that provides many opportunities to taste premium craft beer (and spirits), and meet some amazing people.

Our trip begins in Vancouver. It is much cheaper to get a bus from downtown to Horseshoe Bay, walk on to the ferry (8:30 am to Departure Bay) and rent a car in Nanaimo than it is to take your own car on the ferry. Budget Rent a Car will pick you up at the ferry and take you to their downtown Nanaimo lot, ten minutes away. What you save on car ferry fares can be enough to cover the four-day rental!

Skirting the Nanaimo craft beer scene, our first destination is 80 minutes north west, in Port Alberni. Here are our first two craft breweries. Twin City Brewing is one block off of Highway 4, at the corner of Margaret Street and Southgate Road, and Dog Mountain Brewing is in the old part of town (2 km away). Do check ahead for days of the week they are open, to make sure you can visit both on the same visit.

I recommend arriving at Twin City for lunch (and our timing was perfect after the ferry and the car rental). Owner/head brewer Aaron Colyn has a great line up of fresh core and seasonal beers on tap. I had their juicy brisket sandwich, called the Bulgogi Brisket— Korean smoked marinated beef brisket, toasted brioche bun, mozzarella, Napa cabbage, crunchy carrot and daikon slaw, and gochujang aioli pairs perfectly with a SparkChaser Smoked Red Ale. If you are in the mood for pizza, theirs is second to none on the Island, possibly in all of BC! My favourite is the Maui Wowee. To be eaten, not smoked!

During my stay in Port Alberni, I learned exciting news of a third brewery in the works. Safe to say, you should plan an overnight stay. Looking for something different and unique, I checked into the floating Swept Away Inn down at the harbour. The M.V. Songhee is a 100-foot, converted 1944 minesweeper/tug. Daniel and Bouchra Savard serve up wonderful Mediterranean style breakfast in the morning (included). You can also book seats at a Moroccan dinner party on board, most weekends. Bouchra prepares the main course and Dan does the desserts. Dan has a good supply of Belgian and local craft beers deep in the ship’s hold for a nightcap. Award-winning BC craft spirits and wine are also available. Swept Away Inn is open from April 1 through October 15.

From the harbor, you can see the bright green street facade of Dog Mountain Brewery, just four blocks away at Argyle Street & Third Avenue. Head up the hill for happy hour on the rooftop patio and there’s a good chance you’ll meet Andy Richards and Robin Miles (owners/brewers) as they serve their delicious brews to your table. Recently they have added a tent to the roof, so life on the roof can be awesome all winter long. The beer board menu had twelve great beers listed plus a guest tap: Strathcona Beer Company’s “Love Buzz” Sour.. The house favourite during my visit was #7, the Pineapple Pale Ale. I also really enjoyed the seasonal Arm’s Length Blueberry IPA. For dinner, I recommend the Dark Tower Donair, a juicy mix of spicy beef and lamb. Be sure to visit the downstairs bar where there is canned beer, cigar box electric guitars (yes, electric three-strings that work) and DMB collectables for purchase. The downhill walk back from the brewery was appreciated after a few pints, and I returned to Swept Away in time to have a Belgian tripel before bed. With a third brewery, Port Alberni might require a two-night stop!

Waking up on a tugboat in the morning with a fresh sea breeze wafting in your cabin window from the Alberni Inlet is an experience you won’t forget. If there is a bunk above you, don’t sit up too fast (ouch!). The smell of fresh coffee and Moroccan spices softly fill the passageway from  the galley. Ask Dan and Bouchra to share their story of how they arrived in Port Alberni.

After breakfast, drive across town and connect to Highway 4A west. A stunning two-hour drive awaits you, on your way to the westernmost breweries on the Pacific coast of Canada. During my visit, there was some major road work alongside Kennedy Lake. Check ahead for the highway status. Ucluelet sits on the southernmost part of the Ucluth Peninsula. Tourism, recreation, commercial/sport fishing and forestry power this town. It has a number of high-end resorts, but also some affordable places too. I stayed in the West Coast Motel On The Harbour, with the picturesque Ucluelet harbour, full of docked fishing boats, in front. From here it is only a five minute walk to Ucluelet Brewing.

Each end of the Pacific Rim Peninsula offers lots of activities. On the southern end, the Wild Coast Trail is of particular interest, with open views of Barkley Sound, the Broken Island Group, Amphitrite Lighthouse, and the historic, shipwrecking, wild Pacific Ocean coast. It has many access points and is easy to walk. Make sure to visit the Ucluelet Aquarium, which offers close-up views of marine life from Barkley & Clayoquot Sound waters. Once a year, everything on view is returned to the ocean habitat. There is also Pacific Rim Distillery, with award winning gin and vodka distilled from secret family recipes.

The new centrepiece in town is the Ucluelet Brewery (previously “St Aiden’s on the Hill” church), on the corner of Peninsular and Main.  This young brewery had its grand opening on February 14, 2020, just one month before the COVID-19 pandemic shut everything down. I asked owner/manager Dennis Morgan how they managed to get through the early days of the pandemic. He said “the only thing I could do was sell growler fills out of our front door. I would make about $200 a day.” The craft beers produced here are from master brewer Allan Cukier. The name might sound familiar for those who know R&B Brewing in Vancouver. Allan started brewing test batches for the Ucluelet Brewery months before opening, providing a solid line-up of great beers on their current menu. One of my favourites is the South Swell IPA (6.5%ABV, 55 IBU). It’s like the whole west-coast experience in one glass! A total of nine beers were on tap during my visit, including a wit, a porter, and a sour. There is also a small kitchen on site. I had a Cajun Pulled Chicken Wrap—definitely recommended.

Up early the next morning to watch the sun and fog play on the harbour in front of my hotel. Mid-morning, I met my longtime Ucluelet resident friends for breakfast at The Blue Room, right next to the brewery. Friendly staff and solid hearty breakfast menu makes this a number one spot to start your day. On my way out of town I stopped at the government dock to see a colony of sea lions 50 metres off shore on a float. The barking and cajoling from these big, bad boys can be heard throughout the town!

After passing the Highway 4 turn off, heading north towards Tofino, you enter Pacific Rim National Park Reserve. The first time I visited here was as a child back in the late 1960’s. I always feel the same excitement today as I did back then. Rainforest board walks and long expansive beaches, with the raw power of the Pacific Ocean crashing down, are worth visiting over and over during your stay. Even in the shoulder seasons, surfers can be seen riding the crest of the waves from dawn to dusk. The fresh, crisp air feels exhilarating as you walk for endless kilometres along the white sand beaches. Be sure to purchase a park pass.

Just before the town is Tofino Brewing. This brewery has been serving its delicious beers, such as the Kelp Stout and Tuff Session Ale, since 2011. I sat down with marketing manager Allan Pearson to see how things have gone during this year. Back in March, the brewery stopped production for two months.  Ever since then, they have been playing catchup. Four of the eleven beers offered throughout the year are seasonal, including the Dawn Patrol Coffee Porter, Cosmic Wave Double IPA, Winter Lager, and the Spruce Tree Ale. Growler fills are available to take back to your hotel.

Next door is Tofino Distillery (opened June 2018), with a great selection of gin, vodka, liquors and upcoming whiskies. Neil Campbell, one of three owners/full-time distillers, sat down with me to discuss their products. The distillery is certified organic, so you can be sure the spirits from here are of the best quality. I tasted the Old Growth Cedar and Rose Hibiscus Lavender gins and the Espresso and Jalapeño vodkas. I also recommend their Psychedelic Jellyfish Absinthe, Beach Fire Cinnamon Liqueur, and Limoncello. You can also request a limited number of cocktails as tasters on site.

In the town of Tofino, I stayed in the recently renovated MAQ, a historical hotel/pub previously known as the Maquinna, after the Nootka chief who met Captain James Cook and George Vancouver in the 1770s. Owner John Hooks has added lots of Art Noveau style and open space to the main floor lobby. The rooms are modern and comfortable with new bathrooms and reclaimed Alberta barn wood on the walls (although the walls are a bit thin). Just down the hill is the terminus for the Trans-Canada Highway and the government dock. Take a walk down there in the early morning to experience the fog playing with the surrounding islands and mountain ranges, making a beautiful dreamscape. I noticed two float planes tied up at the dock and in the afternoon I went on a 30-minute tour with Tofino Air. Pilot Connor has been flying in the area for the past two years in all sorts of weather so I was pretty confident the sunny afternoon should pose no problems. It was a spectacular tour flying between peaks on the island and up and down inlets. If you’ve got the time and a few spare dollars it is certainly worthwhile. Tough City Sushi, just a block away, will give you the best view of the harbour while you enjoy some great sushi washed down with a local craft beer.

The short vacation to the most westerly craft beer production area in Canada ended all too soon. I learned a lot about how the owners of not only breweries and distilleries, but also the supporting businesses, had adjusted to 2020. Flexibility and the necessity to make quick changes have most of them in a stable state now. It was really heartwarming to see how the BC tourism and local support have pulled together to ensure everyone can survive. Although the winter may not be the ideal time to head out through the mountains, spring is just around the corner.

Brian was recently named 2020 British Columbia Photographer of the Year by the Professional Photographers of Canada.

This is an award of distinction that recognizes how seriously Brian takes his craft. There were professional entries from all over BC, and for the first time Brian came out on top. What’s Brewing congratulates Brian on being BC’s best in 2020! – Editor