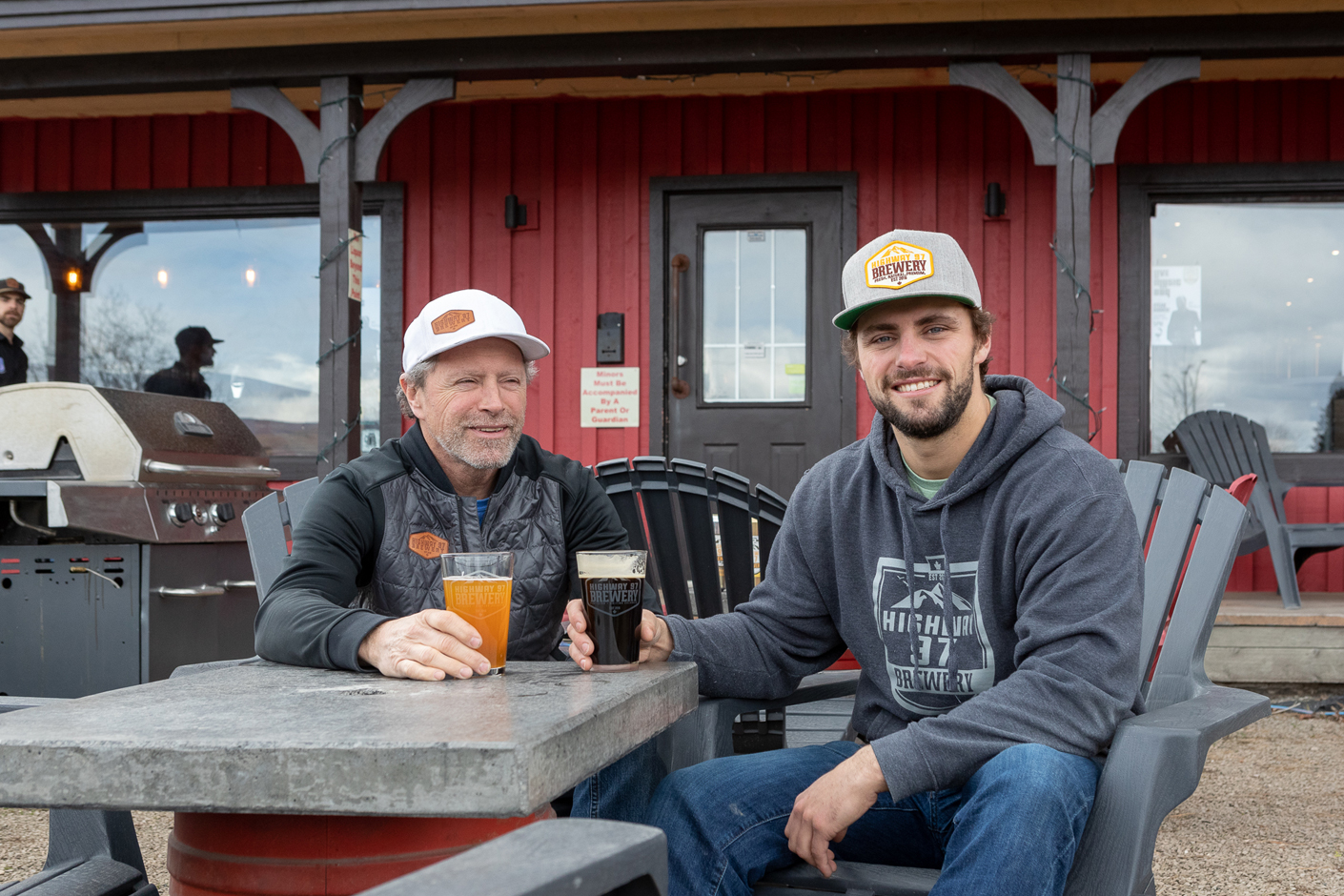 What’s Brewing first met Highway 97 Brewing Co. owner John Kapusty in summer 2016 when he was renovating the old Tin Whistle Brewing location to create his dream business. John already had significant entrepreneurial experience because he and wife Jennifer had been operating their other business, ECM Promotions (printing and corporate promotional products), for two decades by that point. But just as it was for Ron and Patt Dyck of Cannery Brewing, transitioning to beer manufacturing was going to be a bold, challenging move.

The brewery’s doors officially opened in March 2017, and it was truly a family affair. Jennifer handled administration while John (who has a background in the ski hospitality industry) took on general management. Then there were the couple’s three boys, who became part of the team right from the beginning.

Christopher, the oldest, is an electrician, which was of course handy in building a brewery. He also picked up his Serving It Right card early on and started pouring beer as well as doing deliveries and all kinds of things. Chris now lives in Midway BC with his fiancée Emily and works in the oil patch, but he’s still part of H97, helping out whenever he’s in town.

Cam, the youngest, is studying at the University of Victoria. He and his girlfriend Lily have both been part of the brewery over the years. Like Chris, Cam is too remote to be part of the current day-to-day operations, although his Island location enables him to liaise there on behalf of H97 when needed.

That leaves one more son: Nick Kapusty, a 25-year-old BCIT marketing graduate, who is still very much in Penticton and actively involved. For him, Highway 97 is an opportunity to apply what he’s studied: brand building. He’s currently committed full-time to the brewery—more than full time, according to Dad. “He’s learning what a start-up is all about: putting in extra time and getting paid less”, John candidly shares.

But he’s had a significant effect on the brewery. “I think he’s done a great job with our cans and our packaging”, says proud papa, who defers to Nick on the label designs. “He works with our artist Neil Tougas closely. They [being the same age] see eye to eye.”

Nick also works with the brew team on recipe development. “When we first started our concept, we weren’t going to make many beers; we were going to keep it to just six”, recalls John. “But the market kept asking for more.”

For instance, John admits he was originally strongly against doing a sour. But he eventually opened up to it after repeated input from the younger generation. “I was OK losing that battle”, says John, who now enthuses “There are so many cool things you can do.”

The multi-generational mix has had its advantages in other ways. There was the time John and Jen were manning the H97 booth at their very first Fest of Ale. For whatever reason, they weren’t getting traffic; nobody was approaching them. Then Nick strolled into the booth and started pouring beers. Within minutes, a lineup of young female beer fans materialized in front of him.

“It was to the point it was embarrassing”, remembers Mom. The parents had to accept that their son (and his girlfriend Allie, who often helps at the brewery and the festival booths) had the look that was attracting younger attendees to try their beers—not a bad asset to have.

That advantage soon won’t be year-round because Nick, who’s played for the Slovakian national lacrosse team, is moving to Vancouver for lacrosse season. That doesn’t mean Highway 97 will lose him for good, though. Having someone on the ground in BC’s biggest market gives the brewery a chance for a bit of face-to-face business development.

The brewery also has accounts up and down its eponymous highway corridor, as far north as Fort St. John. Kapusty knows his business will always have growth constraints, starting with the brewery’s dimensions. He’s thinking about creating additional space by building upward and adding more floors; the additional on-site storage would certainly be welcomed.

“We tried using a separate warehouse to store product, but we kept running out of stock before we could build the inventory”, John shares. “Demand kept outstripping supply.” Thankfully, the addition of two new 30HL tanks this summer will help with production capacity. As for seating capacity, they’ve added a patio out front, which helps a bit in summer.

Mind you, the customers probably feel that Highway 97 is just dandy as is. Designed with an open-concept layout, it feels like a big ol’ neighbourhood house where locals can come in and just hang out. Its two-level build allows guests to look down into the brewhouse and witness work underway, which people love. One impressed first-time visitor told John, “I’d been drinking beer for 47 years, and I’d never seen it made.” She stayed for five hours!

Pinned to the wall is a gallery of photos entitled “Revy & Roxy’s Beer Buddies”. Named after the proprietors’ beloved dogs, it features numerous shots of the clientele’s canine friends as a warm community touch.

Highway 97 is also an active member in the community of local brewers making up the Penticton Ale Trail. John recalls that the BC ski industry was very close and tight when he worked in it, and notes with appreciation how the Beer Town breweries also work together well: “We know that a rising tide floats all boats.”

“It’s the true small business side of craft beer”, as John sees it, assessing candidly that “We’re a really unsophisticated little company. We may not be as dialled in and efficient as some of the craft juggernauts like Phillips or Central City. It’s a labour of love.”

The extended Highway 97 family includes a tight-knit team of local students who make things go, particularly the brew crew of Shawn and TJ, alongside Nick. As for working with actual family, mother Jen says “We talk beer all the time”. Of the multi-generational mix, Papa John concedes “There have been some intense moments. We don’t always agree on everything.” But still, he concludes that “It hasn’t been awkward. It’s definitely been fun.” As it should be, when your family is fully heads up that life is indeed a road trip.