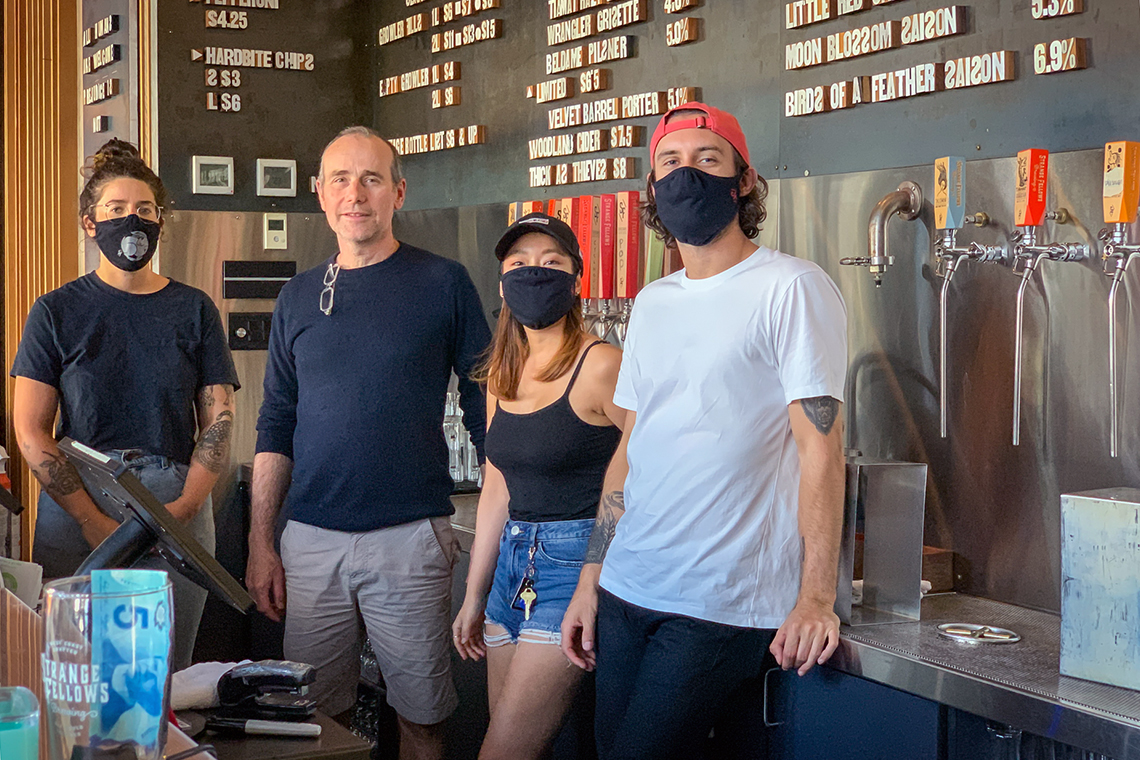 HAVE CAMERA WILL TRAVEL

Followers of my column will be familiar with my reviews of breweries and craft beer pubs near and far. I’ve been able to write about, photograph, and drink craft beer from the local Gulf Islands to Taiwan and multiple countries in Asia, but even leaving our province is not recommended during the current state of affairs. We were allowed to leave our homes again in early June, more than 10 weeks after my favourite local pub regretfully closed its doors. That first draft craft beer tasted heavenly!

I ventured out into our newfound freedom in June and July to talk to brewers, managers, and owners about their experience of this pandemic. I had always believed that BC would one day be the beer mecca of North America, and we seemed so close, and then COVID-19 struck. I wanted to know how resilient our beloved craft beer industry was in the face of such an unimaginable crisis. Would it destroy us or make us stronger? My quest was to find out and, of course, drink some fresh craft beer along the way!

In the second week of June, I took a four-day scouting trip between Pemberton and Delta. We headed north to beautiful Squamish. Lunch at Howe Sound Brewing had to include the satisfying combination of a BrewPub Burger and a pint of Baldwin & Cooper Best Bitter. Then we ventured a few more kilometers north, to Backcountry Brewing. This Brackendale brewing team has been pushing out some great beer throughout the spring. Their indoor beer and food service were on hold at the time, but we picked up some seasonal sours in cans.

If you haven’t been to Pemberton lately, it is worth the drive to visit the Beer Farmers, about 10 km west of the town in Pemberton Meadows. I was fortunate to sit down with the key players: Will Miller (general manager), Brenda Miller (head brewer), and Bruce Miller (farmer and owner). A lot of the ingredients in their farm-fresh beer come right off their 500-acre organic valley farm, which has been in the family for more than 125 years. The two flights of beer were true to their style and flavor profiles. Something about drinking beer on a farm—it just tastes better! One of their bestsellers is the Cranberry and Orange Tart IPA: a completely balanced beer with a memorable creamy mouthfeel.

With an expanded outdoor seating area, Beer Farmers have been able to operate a little closer to normal. After two months of their beer service area being shut down, they had to pick up with canning and home delivery and make sure their products were getting out to distribution beyond the Pemberton/Whistler corridor. Will said, “We see ourselves as quite fortunate, being located on a rural farm. We’ve seen a huge influx of visitors putting renewed value of activities they can do close to home.”

Day four of this early exploration took us to Delta, the far southern reach of this beer survey, for lunch at Four Winds Brewing. A couple of cans of beer paired beautifully with their famous tacos. With an expanded parking lot seating area and all  COVID-19 protocols in place, it’s a worthwhile place to quench your thirst and appetite all at once. Besides, it’s an opportunity to see what special seasonal beers are available for taking away. Brent Mills has one of the very best barrel programs in the country!

Just a few kilometres away as the crow flies is the new Barnside Brewing, whose grand opening happened just two months before the pandemic shutdown. The reclaimed wood that was used for the brewery came from the original White Spot Barn. Co-owner Ken Matenstyn noted, “The strong community support carried us through. One of the positives of the whole pandemic has been a recommitment to family and community. When we were able to reopen to the public, it coincided with finalizing our lounge license. People have been able to sit out outside on our patio and grass area and enjoy the unique setting we are in, surrounded by farms and with hop yards directly across the street.” The two flights I shared, with a total of eight beers, were all spot-on for flavor and style.

In mid-July, I had a week to go out exploring on my bicycle in Yeast Van. Being a homeboy in this area, it can be challenging to get past one brewery in an afternoon. I sat down with Graham With (head brewer) at Parallel 49 for a pint (or two) to check on his COVID-19 situation. Their drinking lounge was certainly much quieter inside than it used to be. As with most craft beer drinking lounges, the city allowed an expansion of sidewalk and street seating.

Graham said, “We were very fortunate to have installed a new canning line last year. When all the restaurants and bars temporarily closed, we were able to direct all our liquid into cans and keep production up. Also, we were able to divert some resources to manufacturing sanitizer for the provincial government.” I always feel like a kid in a candy store when I am trying to decide which beer to choose on their lit-up beer menu wall of more than 40 selections.

Closer to home, I sat down with Jim Dodds (general manager) and Justin Vickaryous (head brewer) of Red Truck Beer. Jim recalls the early days in mid-March: “We had to lay off people in our Truck Stop Diner and reduce work hours in the brewery. We saw our packaging volume increase.” About reopening the diner, he said, “we want to make sure we are doing everything that the chief medical health officer, health minister, and the City of Vancouver require. We seat everyone as we are supposed to and take names and numbers for tracing. We have always run a clean place, but now we are taking it that extra step.”

Stepping into the brewery side of operations at Red Truck, Justin explains, “We implemented some policies and procedures quickly: social distancing, room capacity, cleaning regimes and use of personal protective equipment. Work Safe BC just visited; they were extremely satisfied.” At first, the brewery had to lay off two full-time workers in the kegging area, but that was just for a short time. Now they are back to kegging and have more workers in the brewery. Asked about any changes coming to their beer lineup, Justin replied, “We are not ashamed about it. We are about approachable beers. We are the gateway craft beer. Our flagship beer is our lager. If that brings people into the craft side of things, I’m doing my job right!”

Across Main Street, on the west side of Yeast Van, I stopped in at BREWHALL to chat with Nick Menzies (general manager) and Kerry Dyson (head brewer). Nick noted that, at the beginning of the shutdown, they had to lay off 65 staff from the beer hall. Kerry had seen the writing on the wall from the brewery side, did a 180-degree turn, and canned everything that was in their tanks. “The brewery is too small for it not to be always busy. We worked hard to make sure we didn’t slow down at all. Nick adds, “it’s probably going to be stronger for our brand, long term. Before the shutdown, packaging was a pretty small part of our program. We now have more variety and higher sales.”

There was a theme emerging: breweries needed packaging to replace their kegs, and now it has become the norm for most. Many were forced to think outside the box.

Less than a block away, Faculty Brewing was very busy on a mid-July Saturday morning. Mile 37 Canning was set up in their drinking lounge and head brewer Jacquie Loehndorf and her team were filling more than 1200 cans. It was impressive to see six people barely manage to stay ahead of the full cans that gathered at the end of the machine. Jacquie said, “We as an industry have had to be very quick to adapt and continue to be flexible, as there is still a lot of uncertainty week to week. All we can hope for is continued support to provide work and safety for our employees and good beer to our customers.”

Up the road at R&B Brewing, Gordo Jones (head brewer) took a moment out of his afternoon to sit down for a pint with me. Using Vessel Canning, they have booked months ahead. “We went from around a 60­–40 split, kegs to cans, to close to 10–90, kegs to cans.” In early April, after a brief shutdown, five staff returned to the brewery. Eventually the growler station opened, and people could pick up do-it-yourself pizza kits. In mid-July, they felt almost back to normal with an expanded street patio and sales close to normal.

Back on Hastings Street, I visited Nick Nazarec (head brewer) at Strathcona Beer Company. Nick’s story at the start of the pandemic is similar. Where he departs from the last three breweries is that he has his own compact canning line. “Lucky enough, we have our canning line and as such, we had the option of un-kegging our beer back into the tank to then repackage as cans or bottles.” About the coming months, Nick says, “Expect lots more of our imperial IPAs and sours, as well as fun crushable late summer/early fall seasonals.

Just a few blocks away, on Franklin Street just west of Clark, Container Brewing (another recent addition to Yeast Van) jumped on home delivery. With an expanded patio, they are operating close to their lounge capacity. All the beers on tap are top-notch: definitely worth a flight or two.

My last two breweries, completing the circle, were Callister and Storm. The message from Diane and James respectively was to please buy from them directly. Both are very reliant on front door sales.

With autumn and winter ahead and an unknown situation with the COVID-19 pandemic, everyone is nervous. As a beer drinker, not a brewer, I see there is a lot we can do to support and keep our brew community strong. Go to your favorite neighborhood brewery for a pint with lunch or dinner. Take some cans/growler home. Get out and explore other beer communities near you. Make it a fun activity with a few close friends. More breweries are in the works; let’s nurture them and make our BC craft beer community stronger than ever before. We can do it!