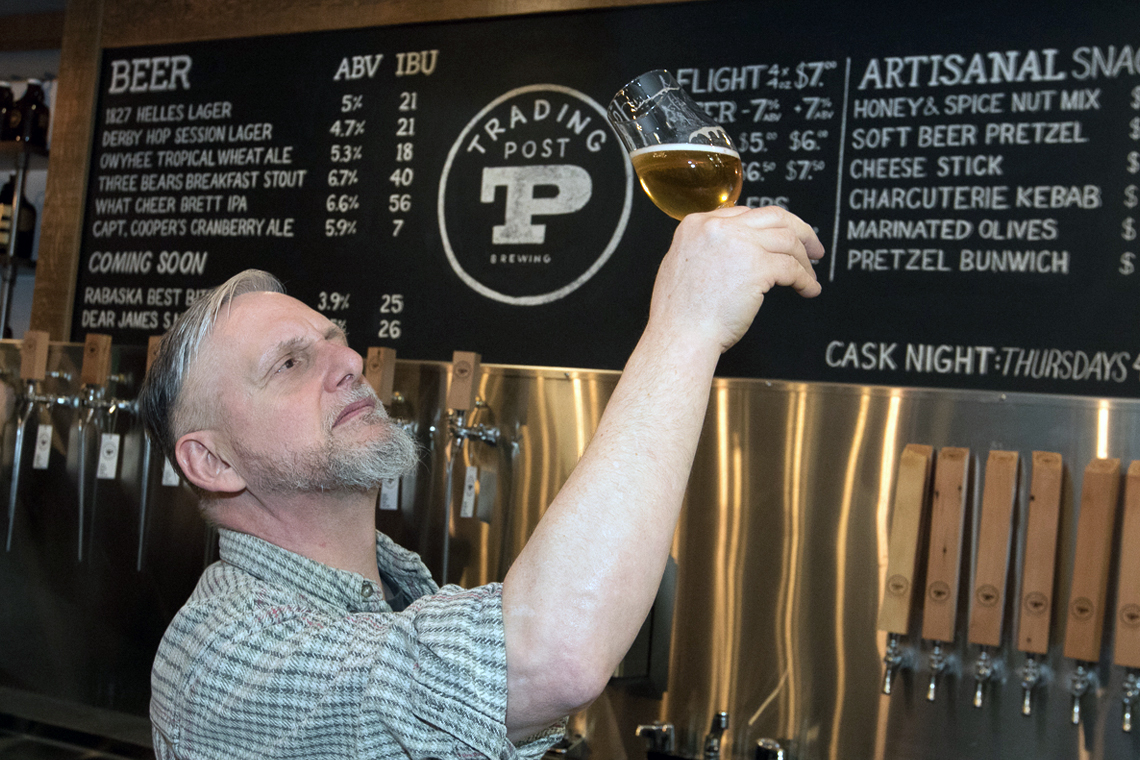 Rock star is a term that has occasionally been used to describe certain iconic BC brewers. Trading Post’s brewmaster most definitely suits that label, but unlike others, he is doubly qualified: as a star musician in his youth, and as a star brewer today.

Tony Dewald hails from Montreal, where his parents met after escaping Soviet-occupied Hungary—by walking across Europe—in 1948. After earning his Bachelor of Business Administration at Concordia University, young Dewald sold ads for the campus paper and was generally at loose ends.

One night, while a band was taking a stage break, Tony and his buddy Gerard Van Herk tried out their guitar and drum kit. Within six weeks they were doing shows as The Half Tones with Tony on drums, Gerard on guitar and another friend as lead singer.

After the singer quit they simplified their sound. Gerard modified his guitar, using only four strings, and Tony played a drum kit with no cymbals, resulting in a raw, low-treble punk/rockabilly sound they termed ‘Sludgeabilly’. As Deja Voodoo, they became popular enough to earn a living, tour Europe and America, and eventually warrant a Wikipedia entry. But by 1989 they were both turning thirty and Gerard needed to support a family. Deja Voodoo was no more, and Tony was again at loose ends.

Through a mutual friend, Dewald met a fellow named Joel Manning who is currently head brewer at Mill Street, but at the time was working at Toronto’s Amsterdam Brewing and its sister brewery, the Rotterdam Brewpub. He persuaded Tony to join him as an assistant, unwittingly recruiting one of a few future star BC brewers. Others Tony recalls working there include Harley Smith, now of Nanaimo’s Longwood Brewing, and Shirley Warne, original head brewer at Steamworks and now at Kaslo’s Angry Hen Brewing. Both Amsterdam and Rotterdam had a variety of beer styles on tap, and Dewald was able to learn everything he needed to step out on his own as a head brewer.

Seven years later, upon his father’s passing, Tony returned to Montreal to care for his mother. He took a job with Les Brasseurs GMT brewing Belle Gueule, one of the best beers in Quebec. Later, at the expanded Les Brasseurs RJ with Paul Goncalves (now at Trench Brewing), he made styles ranging from Belgian ales like La Chouffe (under licence) to supermarket lagers. In 2001, the brewmaster position opened up, and Dewald was interested—but he was told that, as an “Anglo”, he wouldn’t be considered for the promotion.

Around that time, with his mother moved into a nursing home, Tony travelled to BC to visit Harley Smith in Nanaimo. He was attracted by the west coast craft beer scene and the laid-back lifestyle of Vancouver Island. He had also enjoyed one of the early beer festivals at Vancouver’s Plaza of Nations in the late 1990s. He took the plunge and moved west, at first missing out on brewing jobs on the Island and in the Interior. Dewald was making doughnuts at Tim Hortons when Yaletown Brewing’s Iain Hill invited him to come work for the Mark James Group (MJG) brewpub chain.

In August 2002, Dewald started brewing part-time at MJG’s Dix BBQ & Brewery, while also working part-time at Spagnols (the beer kit manufacturer) and Storm Brewing under brewer James Walton. It was a pivotal era in the development of Vancouver’s craft beer scene. Monthly cask nights had just started up in July and a small crowd of beer geeks were beginning to gather. The Vancouver branch of CAMRA BC held its first AGM at DIX in January 2003, and DIX became the place where people would find and join the beer enthusiasts’ group. In July, along with CAMRA Vancouver Tony and DIX bar manager Mark Andrewski organized Caskival, the first in a series of cask festivals. Weekly Thursday casks commenced the following month. Walton brought his ‘fetish crowd’ friends along to DIX, and Thursdays became party night.

As a former rock star, Dewald was accustomed to life in the public eye. He was a major presence at Thursday cask nights, at Caskivals and at fundraising events. He was also happy to greet anybody who showed up on brew days and knocked on the glass wall of the brewery. Tony can switch from boyish zest for life to intense technical discussion of brewing minutiae, and back, in the blink of an eye.

Tony began evolving a Northwest IPA at DIX which attracted, and became highly influenced by, an ex-Californian couple named Adam and Gillian Gile. They pushed Tony further toward the huge Southern California-style IPA (refer to their table of that period’s Cask Night dry-hopping rates in this story’s online version). As BC’s brewers and industry attended cask nights and Caskivals, more and more of them realized there might be a substantial market for really big, hoppy IPAs in BC.

Tony and his partner Andy were subletting an apartment from Keith Lembke, who was working for Chicago’s famed Siebel Institute brewing school. When Keith finally committed to Chicago, Tony and Andy decided to take on the rural lifestyle they had always wanted. They rented a farmhouse at the end of an unmarked, dark, tree-lined track across the road from the Doppler Radar station in Aldergrove. It was a ramshackle old place, covered in hops and kiwi vines, and with owls in the barn. Tony would greet visitors from the hop-festooned porch, looking for all the world like the Wizard of Hops out of uniform.

Commuting to DIX from Aldergrove was a pain, so Tony asked to swap jobs with Derrick Franche and take over MJG’s Big Ridge Brewing in Surrey. Big Ridge was a lot quieter than DIX, so he was soon pulled away by an attractive offer from Dead Frog Brewing, fifteen minutes’ drive from home on a bad day. Tony used his experience at Les Brasseurs RJ to help set up Dead Frog’s new bottling line. When his views no longer aligned with management’s, Tony took a break from the brewing industry and made wines at Lotusland Vineyards for three years, until that business got into financial trouble.

A call from Dead Frog, when they were also brewing beers for Steamworks and exploring a partnership arrangement, brought Tony back to the craft beer industry. After a year, he moved on to Old Abbey Ales, which took him back to his Belgian-style brewing origins. Cost control constraints then made him open to an offer from Trading Post (which leads to our cover story on Trading Post Brewing, coming next). During his years brewing south of the Fraser, Tony has been a mentor many of the brewers now working in the Valley craft beer scene.

Today, when asked to name the beer of which he is most proud from his long and varied career, he slowly smiles and admits it’s still that DIX IPA. Its ghost, the Spirit of DIXmas, is now reproduced annually at Brassneck Brewery in collaboration with veteran brewers Conrad Gmoser and Derrick Franche, on the very brewing equipment which formerly created Dewald’s legendary brews at the now-defunct DIX.