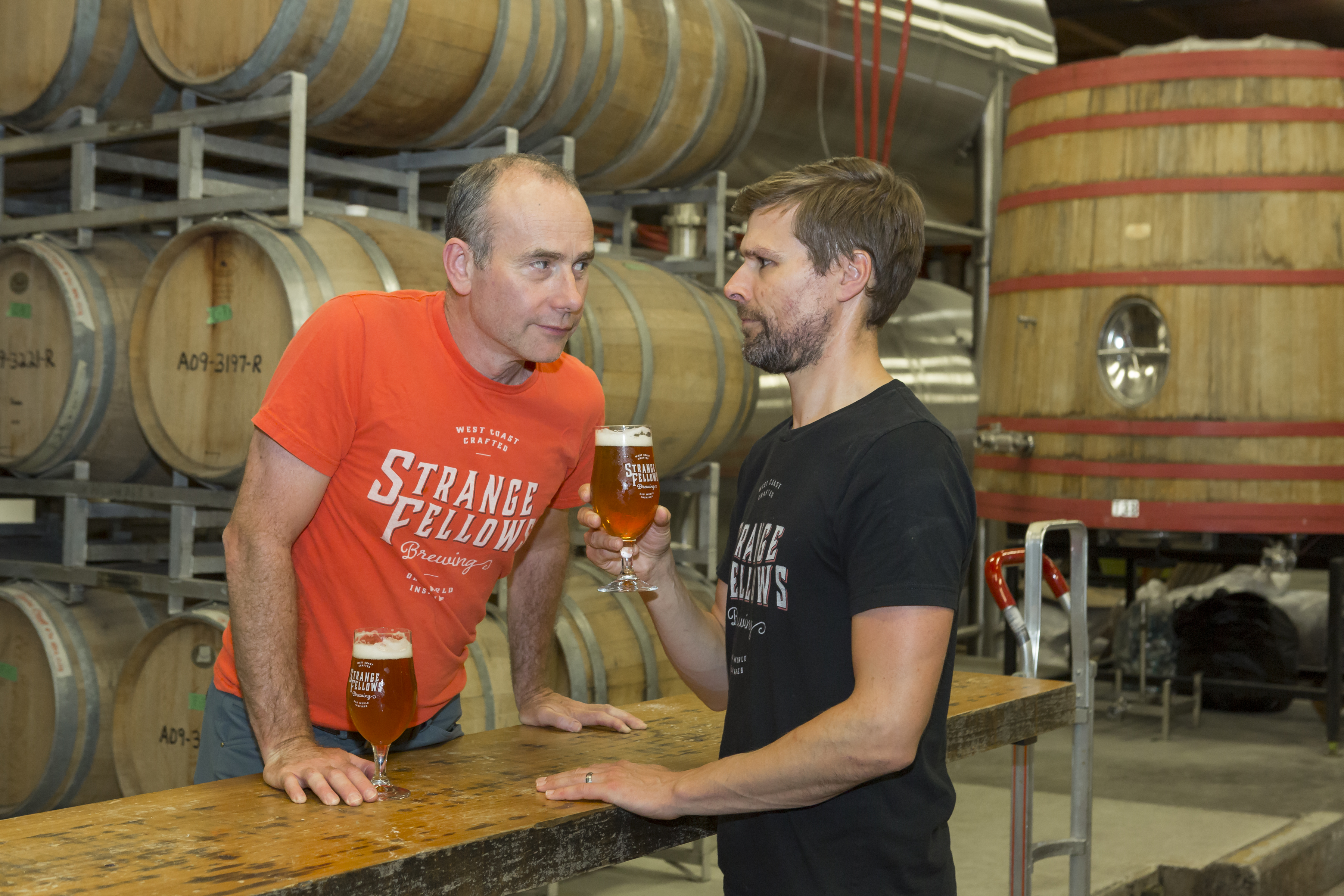 All images by: Brian K. Smith

Aaron Jonckheere turns and squares his thoughts toward the writer across the table.

“Iain knows how I feel about him. We have a great partnership, but no one wants to hear about how I do great accounting or office work. I just want to say, that most of the time, I’d prefer for the brand that it’s about Iain, and about who he is, and…”

His counterpart cuts him off with a guttural “Nooooo…”

Aaron responds, “I was going to say, but you never let me finish…” 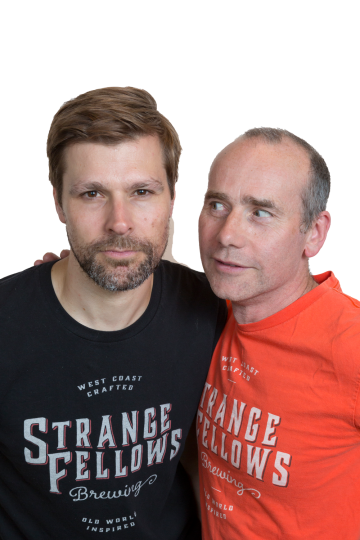 here was a time when it would have been tough to convince a bystander that strangers Iain Hill and Aaron Jonckheere would engage in a fruitful merger, conceiving an offspring as skillfully eccentric as Strange Fellows Brewing. Upon its opening three and a half years ago, the brewery was so instantly accepted that local beer people now often forget how relatively new it still is. Truth is, the passionate and painful romance involved in forming a business together may have calloused their emotions, but scratch a little and the evidence of their differences will surface. Nevertheless, the two brewery founders carry on alike an old married couple, having bonded during a period of courtship beginning three years before their baby was born.

Jonckheere is a Belgian name. Turns out that the co-founder of a brewery respected for its take on ales from the Low Countries comes by his interest in them genetically. “Being a Belgian guy, raised in a Belgian family, beer was always part of my life”, Aaron shares. “I just always thought it would be a cool business to be part of.”

“I had been laid off, and I was trotting around with a brewery business plan. I met with a few beer industry people, but nothing was working out.” Aaron was a homebrewer, a hobby he had inherited from his father and grandfather before him. But he needed a ‘real’ brewer to make his dream work. Then he visited Taylor’s Crossing. There, three blocks from his home in the North Vancouver location that now houses Hearthstone Brewery, Aaron met with a gentle man named Dave Varga.

“David’s such a great guy”, Aaron relates. “Every time I see him, I’m like, ‘you are amazing’. He took my business plan and spent hours on it. He wrote all these notes. Then he gave it back to me and said ‘By the way, I’m not your guy. But I know a guy, and he might be your guy’. So that is when I got introduced to Iain.” Matchmaker Varga set up the blind date at Iain’s workplace, Mark James Group sister property Yaletown Brewing.

Hill, as it happens, is not a Belgian name. The brewer who occasionally gives educational presentations on topics such as sour beers comes by his passion for Low Countries styles by way of exposure to the beers, including travel to Belgium in 1996. No doubt that he would have taken note of his young suitor’s ethnic background. But as a longtime high-profile eligible brewer, Iain had had a number of beaus come calling over the years. He had just recently come out of a serious brewery-planning relationship that had fallen apart. Now it was January 2012, and the jilted Hill was on the rebound. 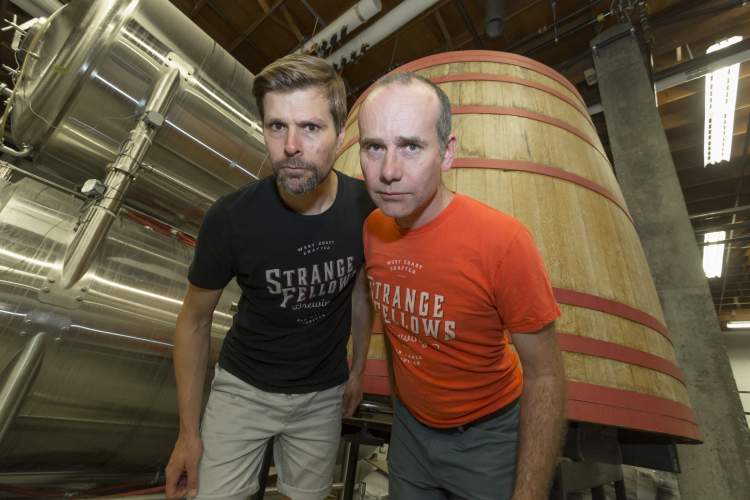 But he still had aspirations. Back in the 1990s, around the time of early years at Yaletown, Unibroue had come out with its bottle-conditioned lineup and Iain was big on the idea of a Belgian beer lineup. He had begun planning his own project called Salamander Brewing Company that would have been along those lines. “Aaron wanted very much to have a Belgian brewery”, Iain confirms. “I knew he had his head screwed on right. If he had come to me ten years earlier, I would have been like, ‘Oh my God, we’re perfectly aligned’.”

However, Hill had continued formulating his business plan while with Mark James, and his experience in a brewpub chain no doubt eventually tempered his original vision. “Belgian beer is great, and [at the time in BC] nobody else was 100% doing it. But the reality is it’s really putting all your eggs in one basket. There’s a broad world of beer out there. Talisman [Pale Ale] is [now] 50% of our sales.”

Once the rendezvous was over, Iain went back to work and thought little of it. However, it wasn’t over for Aaron. Asked for his most significant takeaway from the meeting, he concludes, “Iain didn’t say no”.

The opportunity to work with Hill wouldn’t have been lost on Jonckheere. Thinking back to his “craft beer epiphany” moments, Iain’s seminal, Belgian-inspired Oud Bruin comes immediately to mind, many years before meeting its creator. 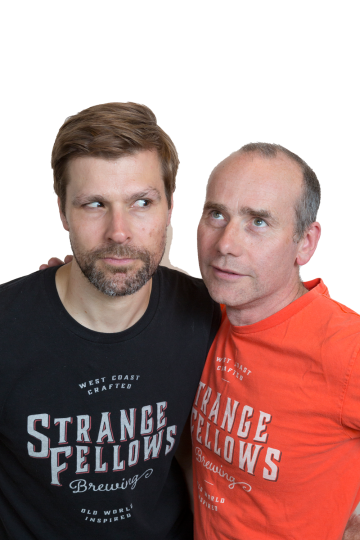 Ultimately Aaron shared his business plan, and Iain had a look. He even came over to Aaron’s house. But he wasn’t committed at first. “I had 3 kids, a mortgage, a job that paid me pretty well and gave me a lot of creative license”, Iain recalls. But Jonckheere hung in there. Then, three months into their relationship, there was a moment when Hill finally said, “I’m ready to go forward with this”.

“Iain’s business card has the best title ever”, Aaron asserts. “He is the ‘Particularist’. He’s a details guy. We kept kicking the business plan back and forth, he kept inserting his ideas, and they kept sticking. We started on the long, winding road towards picking a name.”

The exercise of choosing a viable brand almost ended their relationship. The first name they pegged was the understandable but underwhelming Low Countries Brewing, which stuck around long enough that it became registered and attached to their bank account and cheques. Next came Allegory, which might have worked well had it not conflicted with a South American winery. Looking for inspiration, they gathered together a group of beer geeks and ran a market research focus group, but the two potential partners just couldn’t agree on a name from the fairly long shortlist it provided.

They had trouble dealing with this. Iain recalls that by New Year’s 2014, “I was staying with a bunch of friends on Saltspring Island. I was supposed to be having a good time, but I was f*** depressed.”

“I can’t overstate it: that was hell”, Aaron relates. So he and his wife went over to the Hills’ for dinner and brought five names to compare with the five favoured by Iain and his wife Christine. “We present the names. There’s no agreement. We don’t overlap on anything” he remembers wistfully. Witnessing their awkward inability to deal with this fundamental challenge, Christine remarked that her husband and friend were a couple of ‘strange dudes’. Something about that comment twigged, and over the course of a week or two they solidified the name Strange Fellows—a perfect evocation of their identity.

As for the distinctive design of their brand, it’s the work of the person who inspired their name. Iain recalls suggesting in his very first meeting with Aaron that if they had a brewery together, he’d want Christine, a longtime visual artist, to design the logo and graphics. “Turns out she does a pretty good job” he understates, triggering chuckles of appreciation for their well-defined visual identity amongst those gathered.

Another important piece of the puzzle was their spacious facility, a former carpet warehouse. One day early in the process, Iain had picked up the phone to call Graham With of Parallel 49 Brewing. “By accident, I called this guy named Graham [Disher] who was a general contractor who used to work for Mark James. I was in this headspace where I was talking to a few people about things. I went out on a ledge and said, “Hey, this might be happening.” Next thing you know, Iain and Aaron had a major investor who helped build their brewhouse.

Some of their trial and error is publicly documented for posterity on a WordPress blog that Aaron had set up early on. Google ‘Starting A Craft Brewery’, and you’ll probably find it at the top of your search results. It’s been a valued resource to many, and still enjoys about 5000 views per month to this day.

Something Iain and Aaron agree on is the value of working with a partner to vet each other’s decisions. “You’re not just working in your own bubble; you’re working with someone else’s opinion”, Jonckheere reasons. “Iain is no different than the painter that has their artwork in the [tasting room’s Charles Clark] Gallery right now. We think there’s something really unique about creation, and the arts. We celebrate some really cool, obscure traditions from around the world.”

“You hope for the best, and you plan for the worst”, Jonckheere concludes. “We’re all different. It’s about being open to new things in the world. What Strange Fellows has become about is sharing your differences over a beer respectfully.” Something Iain and Aaron apparently managed to do long enough to turn each other’s long-held dream into a reality better than they each might have imagined. 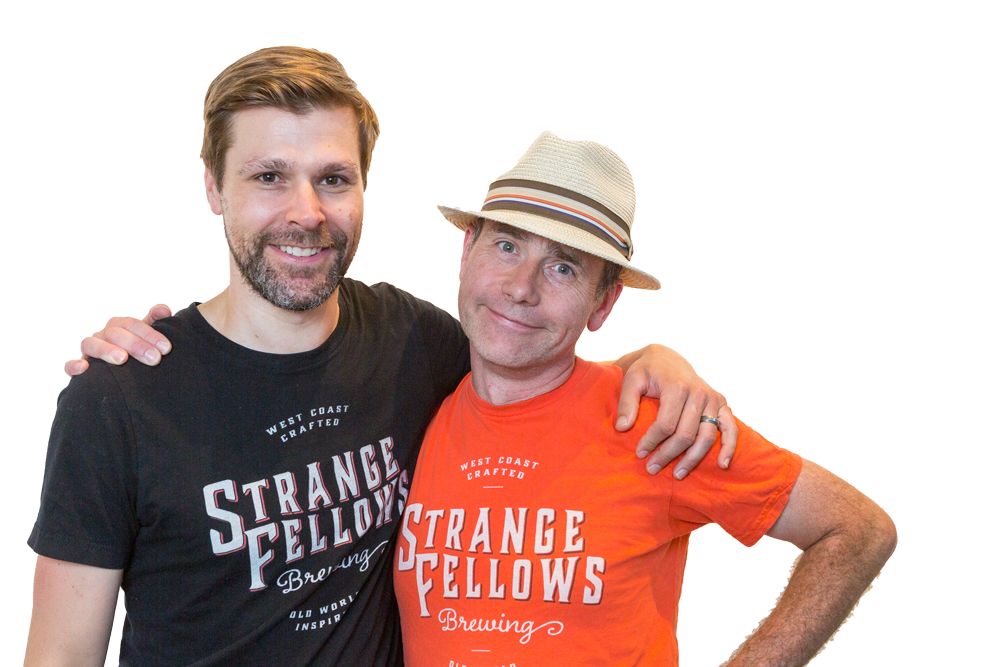