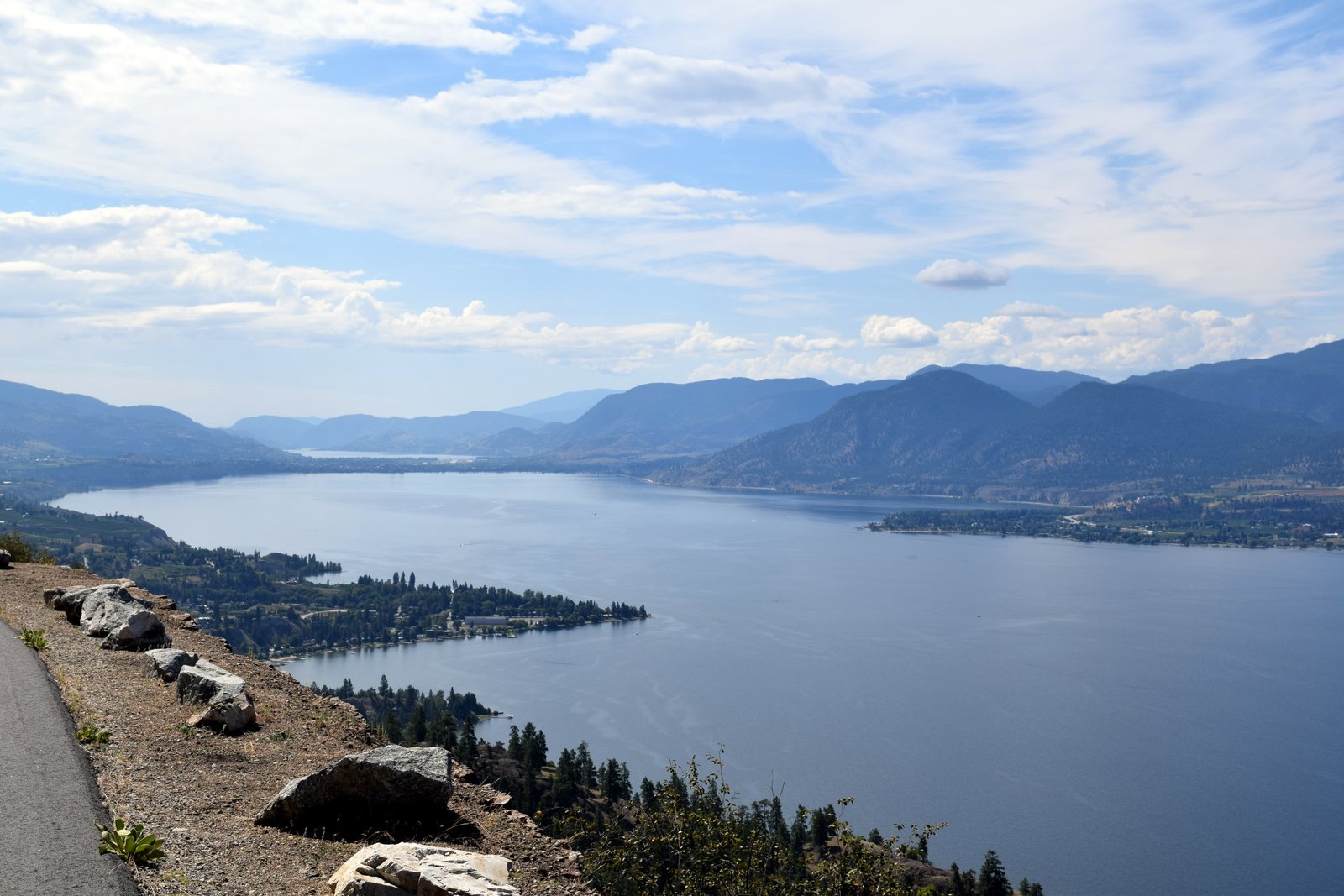 We spotlight the events surrounding the annual Okanagan Fest Of Ale, and two of the best places to eat and drink

On the weekend of April 12th – 15th 2018, beer lovers from around BC will be gathering in the South Okanagan for the 23rd annual Okanagan Fest of Ale. The main event takes place at the Penticton Trade & Convention Centre on April 13 & 14th, but there are a number of satellite events as well.

Around town, you’ll find the various breweries and restaurants hosting things like

For the full lineup of Fest Of Ale events, see https://festofale.ca/event-tickets/taps-around-town

For its size, Penticton is a real beer town, and has been for a while. In fact, it was recently chosen amongst the Best Beer Towns in Canada by Expedia.ca. How did it come to be that way? It has everything to do with the people there.

For a community to develop a shared appreciation in something as mundane and everyday as beer—remember, it is, in most people’s perception—a few things have to happen. The obvious element that leaps to mind is a modern-era brewery, and Penticton got one before the “first wave” of craft ended, back in the mid-90s thanks to Tin Whistle. Early in this millennium they got their second, Cannery Brewing, which would have helped create some momentum. Long-time local pub the Barley Mill also installed a brewery and started putting out its own beers. More recently, Bad Tattoo and Highway 97 Brewing opened up shop.

Five breweries: not too shabby—but there’s more than that

One of the privileges of being beer scribes is the ability to collect a wealth of experiences and meet a variety of interesting people while travelling in search of liquefied enlightenment. Even when simply stay-cationing here in BC, we’ve found endless inspiration. Most of it has come from visiting breweries and getting to know the people and stories behind them, but it’s not all about breweries. Sometimes you find magic in places where the beer isn’t made, but it’s celebrated.

Back in the summer of 2016, on a sprawling trip around BC, we had the good fortune to find more than one such place in a jewel of a beer town, the City of Penticton. For a few days, we were guests of the local Ramada Inn, just after the congregation which had amassed for Peachfest began to disperse. We were invited to explore the local attractions from a beer enthusiast’s point of view.

What did we find: a Penticton version of Alibi Room? A peach-flavoured St. Augustines? No. The first thing we found was in the hotel itself.

The Kettle Valley Station Pub is just what it sounds like: a pub, and it’s in a hotel. You’ve seen that before. All hotels have bars, and many have good beer. At least, they do now. But KVS was supporting craft beer way before it was fashionable to do so.

When CAMRA BC, our province’s pre-eminent craft beer enthusiasts’ society, gained a chapter in the South Okanagan, the KVS Pub became the natural meeting place. The KVS Pub is home to the annual Murderer’s Row cask festival, a Fest of Ale satellite event. This year’s cask party will be held on Saturday, April 14th. Details are here,
https://www.whatsbrewing.ca/event/murderers-row-cask-event

Talk about convenience: Highway 97 Brewing is located a block away from the Ramada (in the building that was once home to Tin Whistle Brewing). Drop by there for a beer and fill up a growler. Then come back to the hotel because it has its own charms.

Our room at the Ramada, like many of the rooms there, sported a beautiful view of their grassy green courtyard and pool area thanks to giant windows and a glass patio door. Stepping out onto the pathway, we were a few strides away from a great beer and a fantastic meal.

James Bryan is Executive Chef at the Ramada/KVS Pub. He is an amazing person to have a conversation with, a true personality. Learning his “chops” (we enjoy the odd pun) in Europe, he has a wealth of tales from working in world-class kitchens. The fact that a “little Ramada hotel” would have someone like this on staff showed us that they’re not just any old chain hotel.

From our beer lover’s point of view, the best part was how James and the people at KVS have realized that good food (which they make, you get the idea that it’s not just “pub food” there) was best complemented by quality beverages. Of course, Penticton has long had access to some of the best locally-made wines in Canada, but they also had a head start in craft beer, as we explain below. KVS took full advantage and started bringing in local taps early on.

The tiny review we had space for back in our Fall 2016 issue, amongst our extensive Staycation BC coverage, hardly begins to do justice to the experience of visiting the KVS Pub and staying in our attractive glass-fronted room at the Ramada. It’s true that what we’re describing involved a little VIP treatment, but it wasn’t far off what the other folks around us were enjoying. 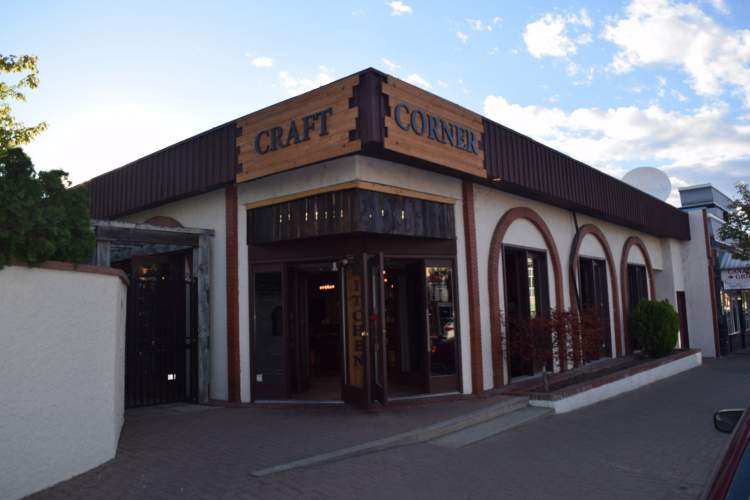 Speaking of dining in Penticton, let’s talk about Craft Corner Kitchen. Here’s a unique place to have a meal, with its amazing long table and side tables crafted from live-edge timber and real tree trunks for stools. Plus, the casual tree-covered outdoor patio; not your average digs.

Owner Jonathan Cote is an ambitious young man with a community focus. His restaurant’s menu reflects that in two ways: the commitment to locally-sourced ingredients, and the style of meal-planning he engages in. Jon believes in the importance of eating as communion amongst a group or couple and encourages sharing in the way he crafts his offerings. Sampling bits and bites together is the order of the day. You don’t have to share if you don’t want to, but it’s a great option when at Craft Corner.

You’d expect a place with ‘Craft’ in the name to offer good beer, and they do. When we were there, Jon was carrying eight taps of mostly local brews. But the beverage category in which he truly shines is craft cocktails.

Jon is a real mixologist with a sense of creative license in his own establishment to make some stunning drinks. We were treated to a flaming Kon Tiki-style concoction lit out on the patio in front of us before we blew it out and sipped it. Then we switched back to his great local beer list to chase it down.

Speaking of beer at Craft Corner Kitchen, join them for Strange Brews, held Thursday April 12th in advance of Okanagan Fest of Ale. Look for details on their website, http://www.craftcornerkitchen.com

When you add restaurant options like these to the five breweries in town, it becomes clear why Penticton BC is a destination for those who love to wine, dine and/or recline with a great craft beer. And when you add the Fest of Ale weekend, it’s the best time of year to come into town and check it all out.

Tickets to the event are available online at www.ValleyFirstTix.com
Or can be picked up person at the Valley First Box Office at the SOEC
Single Day Admission $29; 2-day Weekend Pass $49 (inclusive of tax and fees)
Groups of 12 or more enjoy 10%+ off single day or weekend passes

Counting Down to Craft in the Sudsy Okanagan

Check out more pics from our visit to Kettle Valley Pub:

Check out more pics from our visit to Craft Corner Kitchen: