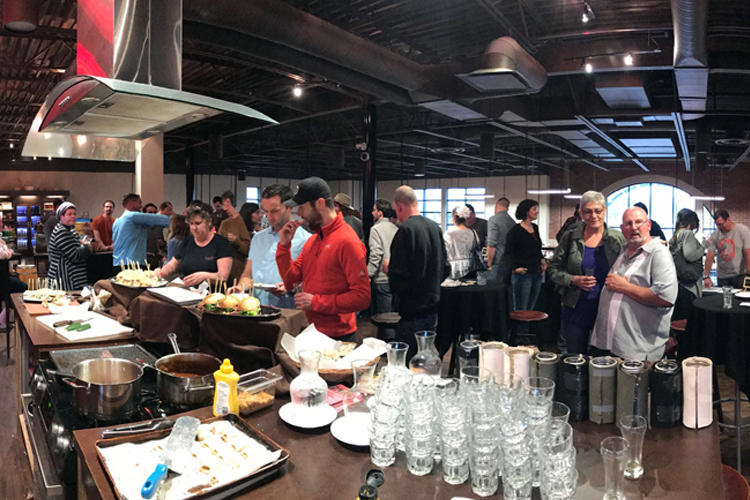 This round, we spotlight the Nanaimo Brew Club, a primarily-online resource group founded in January 2015 for sharing ideas and topical material about home brewing beer. The group, currently more of an online resource group than a physical meetup, is over 140 members strong on Facebook.

Member Scott Innes, who provided the information for this spotlight, joined in January 2017. Scott says, “We don’t have a homebrew store in Nanaim,o so ingredient sharing is a common theme in the group. Every request for help or supplies has been met with open arms”.

The first actual meeting that Scott participated in was the second annual Brewed Right Here event, hosted by Lucky’s Liquor Store back in June. Eight homebrewers joined in the competition and tasting, complete with a trophy, prizes from local breweries, and the right to brew with one of those breweries.

Scott tells us that writing to What’s Brewing has inspired him to see if the Brew Club can meet once a month. Sounds like a great goal.

By the way, Nanaimo, once home to a CAMRA BC branch, is now home to a brand new Nanaimo Craft Beer Society, who will soon hold their first-ever event, “Crafternoon” (how come no-one else in BC has used that name yet?). Find them at www.nanaimocraftbeer.com

Nanaimo already has three excellent craft breweries, and now it looks like their grassroots beer scene is solidifying too.

Get ready: Feb 21-25 2018 is hereby proclaimed as Nanaimo Beer Week! Four days of free events followed up by the sold-out finale of Crafternoon at Longwood.

Vital piece of information: you can enter to win a ticket to Crafternoon + a limited edition Crafternoon T-shirt (approx. $100 in value) by attending these events. The draw will take place on Saturday, February 24. All events are 19+.

Thank you to our brewery and sponsorship partners for their assistance in making Nanaimo’s first Beer Week happen. Visithttp://www.nanaimocraftbeer.com/ for more information on each event, and we hope to cheers you soon!