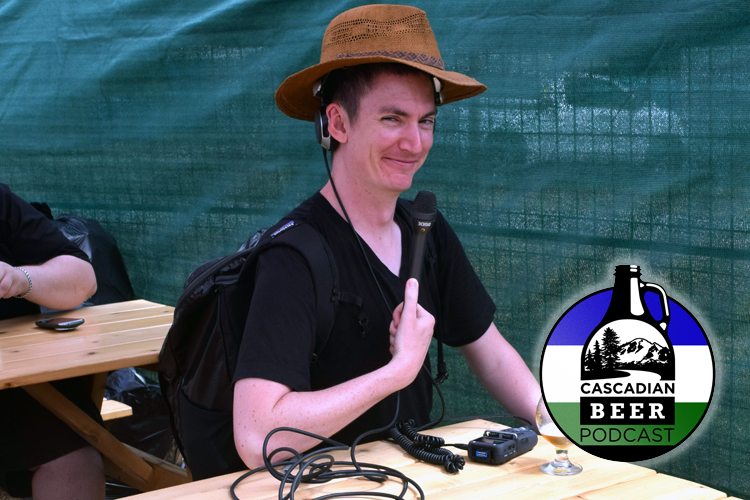 In the second part of this three-part series, we look at Podcast Host/Producer Aaron Johnson.

Aaron Johnson introduced himself at the What’s Brewing booth during an event at Central City’s Red Racer location in Vancouver. We chatted briefly, but I was focussed elsewhere. Later on, I remembered him and took a moment to look up his podcast website. I was stunned. Not by what I saw, but by what I heard.

Aaron started in radio when he was 15 years old. Originally from Bellingham, he moved to New Zealand to study Audio Engineering then landed a job there with a national TV station. Also working the occasional radio program, he eventually earned a weekly national radio show. He’s also worked at Bellingham’s major FM radio station. He has chops.

Along with his experience as an on-air talent, he’s an accomplished audio technician. It all shows in his podcasts, which are at a level of production well above what most of us beer bloggers with sound recorders could achieve.

In the summer of 2016 I had a recording of Spinnakers’ Paul Hadfield kicking around that I had captured at a beer conference. It was of mediocre quality but the keynote address Paul had given was great, and I was considering publishing it on What’s Brewing as an audio post. Then I listened to Aaron’s interview with Paul and I was knocked out. I started telling people about Aaron. Clearly, I still am! Here are a few thoughts from the man himself.

What got you into beer, and the craft scene?

While I was in NZ, craft beer was really starting to take off. One of the first beers I remember that really got me into it was Epic Pale Ale, a NZ craft beer. I then just started to learn more about beer and got into homebrewing.

Your brand is distinguished by its inclusion of the word ‘Cascadia’. Tell me about your nationality.

While traveling and living overseas I’ve been asked a lot if I’m either an American or Canadian. Growing up with family on both sides of the border, I really feel at home on either side. “Cascadian” is the best way to describe my regional identity.

How does the BC beer scene compare to the US?

It’s exciting times everywhere in the Pacific Northwest, but it still seems very “new” in BC. When I visit places in WA and OR they feel established, even if they’ve just opened up. I feel BC is coming along well when it comes to awareness of craft beer, but there is still room to grow.

Tell me about some of the special moments you›ve had while talking to people.

With each guest, I’ve discovered something new. I love exploring our Cascadian backyard, and I’ve found some great brewers in the process. I’m grateful for their time, as I know it’s not easy running a brewery, at any scale.

What’s your secret for approaching all the interesting people you interview?

It’s a secret [grin]. There is a level of planning and thought beforehand. I can’t pinpoint it for myself, it just kind of comes naturally I guess.

Your brand includes the word ‘Podcast’, but your skills and connections could also translate to blogging or video.

I would like to get into writing a bit more. Video, however, needs to be done right. Anybody can stick a camera on a tripod or prop their smartphone up in a corner, but it’s all the details that the average person doesn’t think about that makes a great video: the lighting, cutaways, editing, and the audio. It’s a lot less forgiving; it’s really easy to make a boring, uninteresting clip.

Personally, audio is what I know and what I love doing. I have a face for radio, so I’m happy sticking to sound, ha ha. I also feel the people you interview are a lot more relaxed with just an audio recording rather than having a camera present.

How would you like your work to benefit or serve the craft fan community?

I want the listeners to understand that what they are drinking is indeed a crafted beer. Somebody has (hopefully) spent a lot of time learning the ins and outs of brewing, and fine tuning their product. They didn’t just wake up one morning and create an amazing IPA in a matter of hours.

Also, I want them to have an appreciation for the small business owners that most craft brewers are. They probably haven’t had a day off in months, maybe years, so when people are enjoying an amazing beer, I hope that feedback gets to the brewer. Beer is meant to be fun.