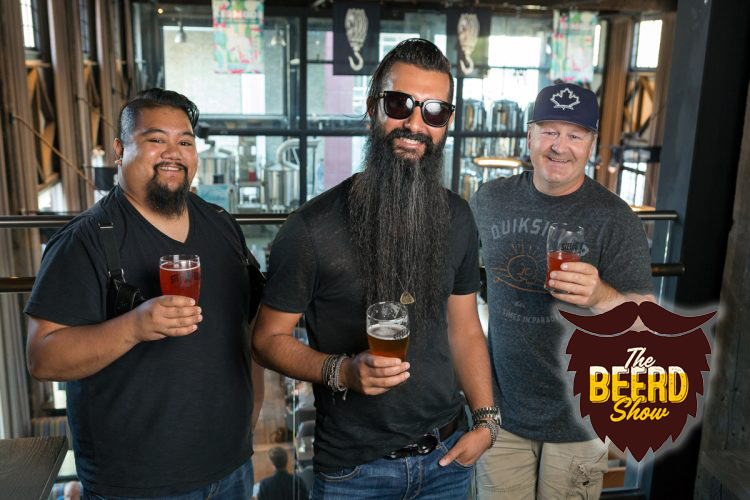 In the first part of this three-part series, we look at  Host/Producer Kevin Singh, and his team: DOP/Producer Steve Murray | Photographer Francis Santos | Editor Bradley Stewart

It might sound cutesy to name a video series The Beerd Show, after the frontman’s facial hair. I think Kevin and the crew would admit that the name isn’t meant to be deep. But then, “What’s Brewing” is not particularly existential either. The Beerd Show brand artwork, which is pretty slick, is right up front about the role Kevin’s appearance played in the origin of their series.

Before this talk of cosmetics causes you to conclude that the show is superficial, consider the work that goes into it. One reason I respect The Beerd Show is that it’s a team effort, and that there are a few minds contributing to what’s going on. Also, the technical talent of the crew is beyond dispute.

Steve Murray is the show’s Co-Producer and Director of Photography, aka the guy who comes to your brewery with a giant video camera. He tells the show’s origin story just as well as Kevin, and their recollections match bang-on. In my opinion, that’s a great indicator of friendship, and it so happens that their bond is where the story starts.

“I work in television”, he relates. “Kevin and I hang out together, drinking beers. Everywhere we go, people come up and talk to him about his beard. ‘Can I touch it’, ‘How long have you been growing it’–he gets it all the time. One day over beers, I said ‘you know, we should put together my skills as a camera operator with your beard and love of beer.’”

Creating the first episode, they had to consider length and format. By the second show (shot at R&B Ale & Pizza House), they got their formula down. Each brewery profile features shots with the brewer, staff and tasting room patrons. Then they toss in some ‘Beer Facts’: trivia on cue cards read out by willing beer drinkers.

I had the opportunity to try out the Beer Show experience myself, as the subject of an interview by Kevin. We all headed to Steel Toad Brewing, where COO Richard Goodine was kind enough to host a beer media powwow. While What’s Brewing Chief Photographer Brian K. Smith shot the cover of this issue, Steve fitted me with a clip-on mic and set up his wide-angle shot. He then recorded his single shots on his main rig, as Francis snapped away on some photos. I had a bit of fun and turned the tables on Kevin midway through the interview, asking him a few questions myself.

During our taping, Kevin mentioned that it would take about 3 years to get to his level of follicular development. I quietly mused that 3 years of beard on my face would look a lot less like ZZ Top, and a lot more like scraggly gold rush prospector. That’s OK; it’s not my job to be the eye-catching frontman—I work behind the scenes in What’s Brewing. But I can vouch for the nervous fun of being on camera, and The Beerd Show team’s professionality. I certainly see why they have no problem getting tasting room patrons to join in.

Here are more images from The Beerd Show taping: