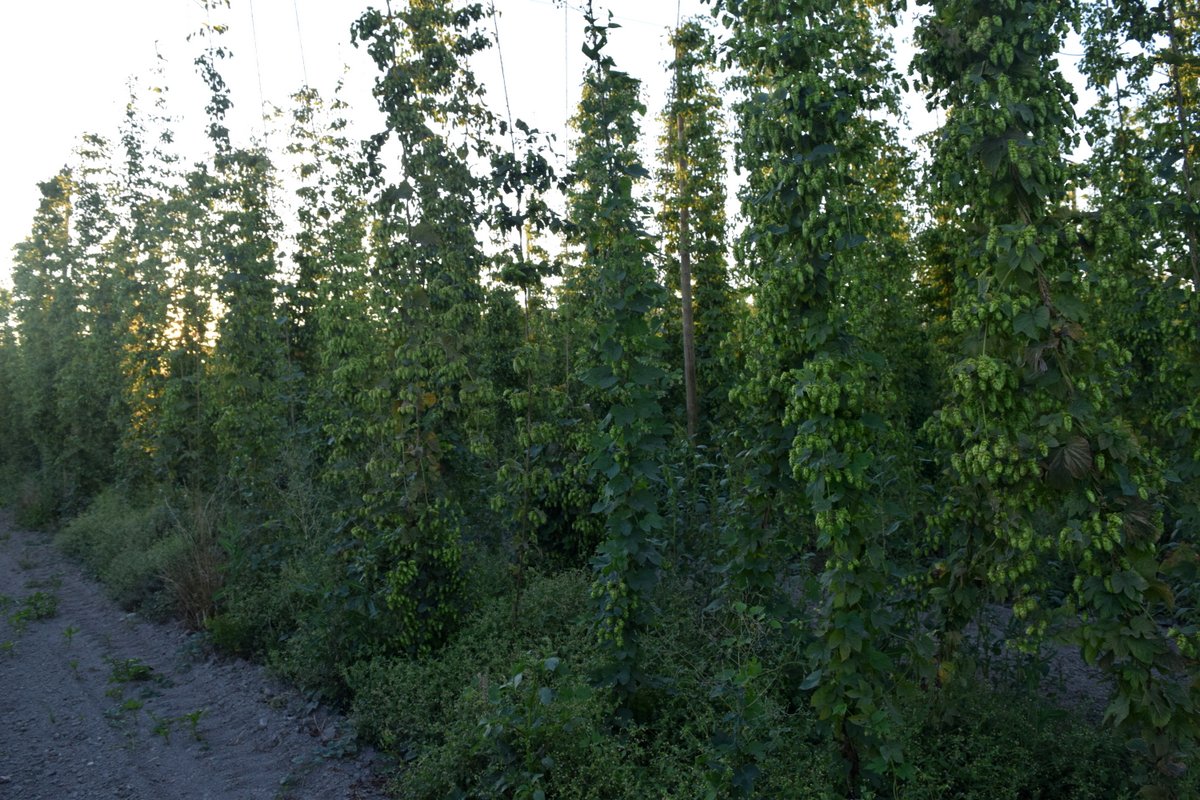 Late summer is hop harvest season. This is when your favourite brewers grab as many fresh hops as they can get their lupulin-stained hands on to brew a variety of IPAs and other hoppy ales. Whereas seven years ago BC had only three hop farms, they are closing in on 50 hop farms to keep our local breweries, and other markets, sustained. That’s 25% of Canada’s hop farm population and undoubtedly, BC’s farming community is still growing.

Hops have a long history in BC dating back to 1862 however after World War II, the farming community started to decline. Competition from the colossal hop farms in the Yakima and Willamette Valleys proved to be too great for BC and the decline continued until the late-90’s when hop farms essentially became extinct in BC.

The resurgence of hop farms in BC was launched by Rebecca Kneen co-founder of Crannóg Ales and Left Fields in 2001 and many years later in 2009, Chris Sartori started Sartori Hop Ranch. The deficit of quality hops in both the international and local markets created room for growth and in 2010, John Lawrence started Chilliwack Hop Farms as a retirement project.

What started as a little three acre hobby for John has grown to 305 acres. Yes, that’s right, it’s grown hundredfold in seven years and technically, it is the largest hop farm in Canada. Their acreage is a mixture of their own fields as well as some crop share agreements they have with local dairy farms. While 300+ acres is large, it’s just a drop in the bucket compared to the hop mecca in the Washington valleys and yet, BC farm hops are sought after worldwide.

Hops impart a variety of flavours and aromas for your beer – floral, herbal, citrus, spice, grass, pine, earthy, pepper and many more. To achieve these distinct profiles, hop growers nurture a variety of hops to satisfy the market. Chilliwack Hop Farms currently grow 23 varieties and import another 110 from around the world including the Czech Republic, Slovenia, United Kingdom, Poland, New Zealand, Australia and the aforementioned behemoth, Yakima Valley. Their clients grow far beyond Canada (300 clients) and the USA (250) to the large, and perhaps surprising markets, of Russia who receive a container every two months and Asia (Hong Kong, China, Philippines, Taiwan).

John Briner at Chilliwack Farms sees a lot of room for growth and potential in the industry. New and trendy novelty hop varietals (i.e. Medusa, Denali, Cashmere, Jester) will always have a place – but what about hop oils? There are hundreds of essential oils found in hops that are conceivably under-utilized. He sees potential in exploring how these oils can be explored and experimented with. He also ponders about what could happen if you dry hop during primary fermentation. Or what about various yeast strains and hop oils combining together – will this be the new trend? Zero IBU beers were probably not a consideration a couple of year ago, and yet here we are. The possibilities are endless.

To say that John has a passion and vast knowledge of hops is an understatement. I love my little backyard hop growing and could ask John many, many questions about the industry but I refrained and asked him about the big showdown – Yakima Valley hops vs. BC Hops. Do they have the potential to be the same quality? Turns out, they really do.

The terroir of Chilliwack and Yakima are similar but there can be regional anomalies due to weather spikes or other forces of nature. For instance, last year the alpha acid was lower than the normal range for Cascade and Centennial in Yakima and yet BC hops were within range.

One hop grower in Yakima has been working with Chilliwack Farms for the last three years to study how well Amarillo hops would potentially grow in Chilliwack. Amarillo, on an alpha scale, sits somewhere between Centennial and Cascade and thus, they used these two classic varietals for testing purposes. The verdict? There was a two-day harvesting difference between the two regions with Chilliwack harvesting later. Additionally, the Yakima farm took samples from Chilliwack’s Centennial and Cascade hops every week from August to Halloween to test and compare with their Yakima hops. Results showed how similar Chilliwack and Yakima’s growing abilities are and thus, Amarillo appears to be a good candidate for growing in Chilliwack.

As for hop harvest season, 2017 is proving to be about a week early for Chilliwack Hop Farms. Hops are being picked starting August 17 for local fresh hop beer and the following week, hops will be picked for commercial use. For Chilliwack Hop Farms, an average harvest is 1,800 lbs/acre for Cascade and Centennial whereas Nugget yields about 2,200 lbs/acre. With over 300 acres to harvest, that’s a massive undertaking.

I asked John what was in store for 2018. As the demand for local product keeps increasing, including requests for organic hops, they have expanded the farm to include 50 acres of organic hops – 15 acres are a second year field and 35 acres are first year. Other expansion includes adding to existing varietals as well as potentially growing Amarillo for the Yakima Valley grower mentioned previously.

With the growing craft beer industry in BC and abroad, hop growers are facing increasing demand for quality local hops – and they seem to be succeeding in this respect. BC’s hop farms have an unprecedented opportunity to supply hops to the local, national and international markets with no end for growth in sight. Go BC!