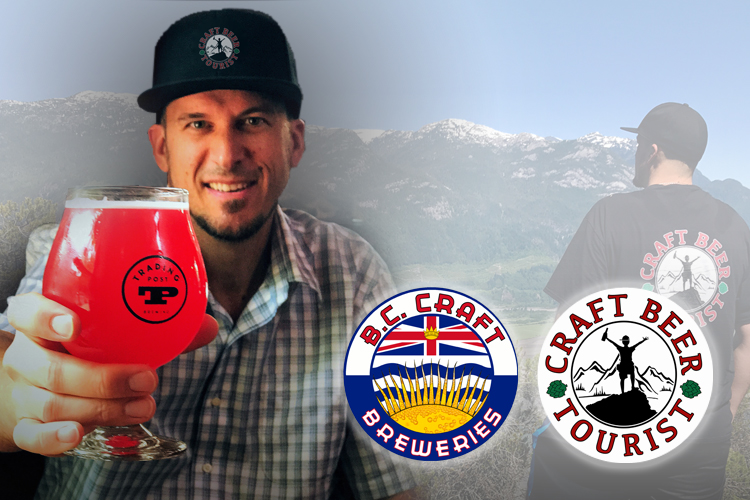 In the last part of this three-part series, we look at Social Media Producer Tim LaHay.

Tim “10 K” LaHay (nickname courtesy me) is an interesting individual. In a short time, he’s morphed from your average craft hobbyist to the owner of a minor social media empire, all based around BC beer. Tim, who works in hospitality as a manager by day, has demonstrated mastery of a very modern media space: Instagram.

Tim’s approach is to act as a content aggregator, repeating the feeds of BC’s many social-media-conscious breweries in one concentrated stream. Within the space of just this year 2017, Tim has managed to capture over 10,000 followers of his BC Craft Breweries account, which is noteworthy.

However, he made our spotlight because he’s shown that he’s about more than just click and eyeballs. Tim’s become a bit of a leader within the craft beer community. It began with his interest in hiking, leading to a well-attended group outing to Buntzen Lake organized via his Craft Beer Tourist account. Recently, Tim focussed on raising funds for wildfire relief.

The #BCCraftCares campaign raised over $11,000 in Canadian Red Cross donations during August 2017. For that Tim made the news–not just the craft beer kind like us, but the ‘mainstream media’ as well. Here’s what Tim has to say about the sudden attention.

When did you start up Craft Beer Tourist, then BCCBM?

I first registered the domain name www.craftbeertourist.com after a road trip to Portland in October of 2016. I had planned on focusing primarily on blogging about my travels, hikes and craft beer adventures but once I started the Instagram account to compliment the blog, it kind of took off and I ended up making it my primary focus.

The @bccraftbreweries account was created in January of 2017 with the intent of building as local of a craft beer audience as possible by focusing strictly on BC craft beer.

Did you have any other volunteer/community leadership experience?

I have been a volunteer coach to my kids sports teams for a number of year.

What’s the secret to gaining the support of all those breweries?

I work hard to create a single stream of exciting BC craft beer news, releases, tap takeovers, tap list updates, festivals, cask nights etc.. and I do it all as it happens, as best I can. I have never asked for anything from the breweries other than to tag me in posts that they want shared. Some breweries have small accounts and they appreciate the larger audience, other just seem to enjoy the idea of a repost to an extended audience beyond those that follow them.

You created a brand around reposting social media updates. Is it all done by good old-fashioned manual labour?

Yes. 100% I use the repost app. I have a private account that only follows the breweries so I can find my content easier. I copy the link to my repost app, and then drop it into Instagram and usually add a headline as to what it is.

I haven’t heard a single negative response to what I’m doing. From a business standpoint, I think the primary goal of Instagram is to be visible, create engagement and to drive business. When someone shares your post, it only adds to what you intended to do in the first place. Everyone that I have spoken to from the breweries has been thrilled with my efforts and I think the quick response to the requests for prize donations speaks volumes to that.

Are you trying to repeat all posts possible, or do you consider your work to be more ‘curated’, ie, only the posts that you feel are most valuable?

I set out a criteria for what gets reposted and its been the same since the beginning. As a business its good to create a vibe or theme with your Instagram feed. They can’t just be sell, sell, sell all the time so they mix in a lot of feel good posts. “Hey its Friday, you deserve a beer” with a nice picture of a flight on the bar and a smiling staff member. I like to refer to those as “jabs.” I look for the “right hooks.” Like when they put up a post of a brand new beer release that is exclusive to a festival in a couple weeks, or announce a tap take over at a local pub. Those are the ones that I want on my feed.

At this point, is BC Craft Breweries a revenue-generating business, and/or do you have any plans to monetize it?

I have not made a dime off of this account but I have been granted media access to a number of beer events and have had the opportunity to meet people behind the scenes which has been amazing. As for monetizing in the future, the answer is Yes I do plan to but it will never be at the expense of the breweries as they provide my content and are the reason I have 10K followers. I plan to create my own online store with craft beer related items and mix some self promotion into the mix discreetly. I also hope to work with those that are around the craft beer business but aren’t breweries. People or businesses that may find it attractive to gain access to a local craft beer specific audience via sponsored posts. Brewery tour companies, festival ticket sales, custom product retailers etc.

Are you going to do more of the same thing in Twitter or any other platform?

How would you like your work to benefit or serve the BC craft beer industry and/or fan community?

On my Craft Beer Tourist account, I have a global following of 14.4K people that love craft beer and the outdoors like I do. I want to promote BC to them as a travel destination for craft beer tourism as well as a great place to experience nature! Much like the recently launch BC Ale Trail campaign.

As for the @bccraftbreweries account I want to provide the most up-to-date centralized source for BC craft beer info available for the entire province. I also hope to continue on with The #bccraftcares initiative that I started with my Red Cross Fundraiser. I hope to find ways to work with other charities a couple times a year and give back to our community. There are already a number of breweries that have expressed interest in participating in future fundraisers!

Do you think you’re becoming fairly well recognized at this point? Do you get positive feedback?

For only having been at it for less than a year, I would say I have made a bit of a name for myself. I mean, your writing an article on me right? Lol! As for feedback, I get lots of it.

Not just from the breweries expressing their gratitude but from the people that follow the account. I love hearing that people check my feed before going out with their friends on a Friday night or that they love discovering all the new beer releases as well as breweries that haven’t experienced.

When all is said and done, what would you like people to think of when they see your brand?

I want my @CraftTourist account to inspire people to get outside and explore this beautiful province of ours as well as visit their local breweries. To find the same joy I do when I summit a mountain and then reward myself with a delicious BC craft beer!

For @bccraftbreweries I want to be a social feed that people turn to to find out the most up-to-date bc craft beer info as it becomes available.

Some more images from Tim’s adventures: