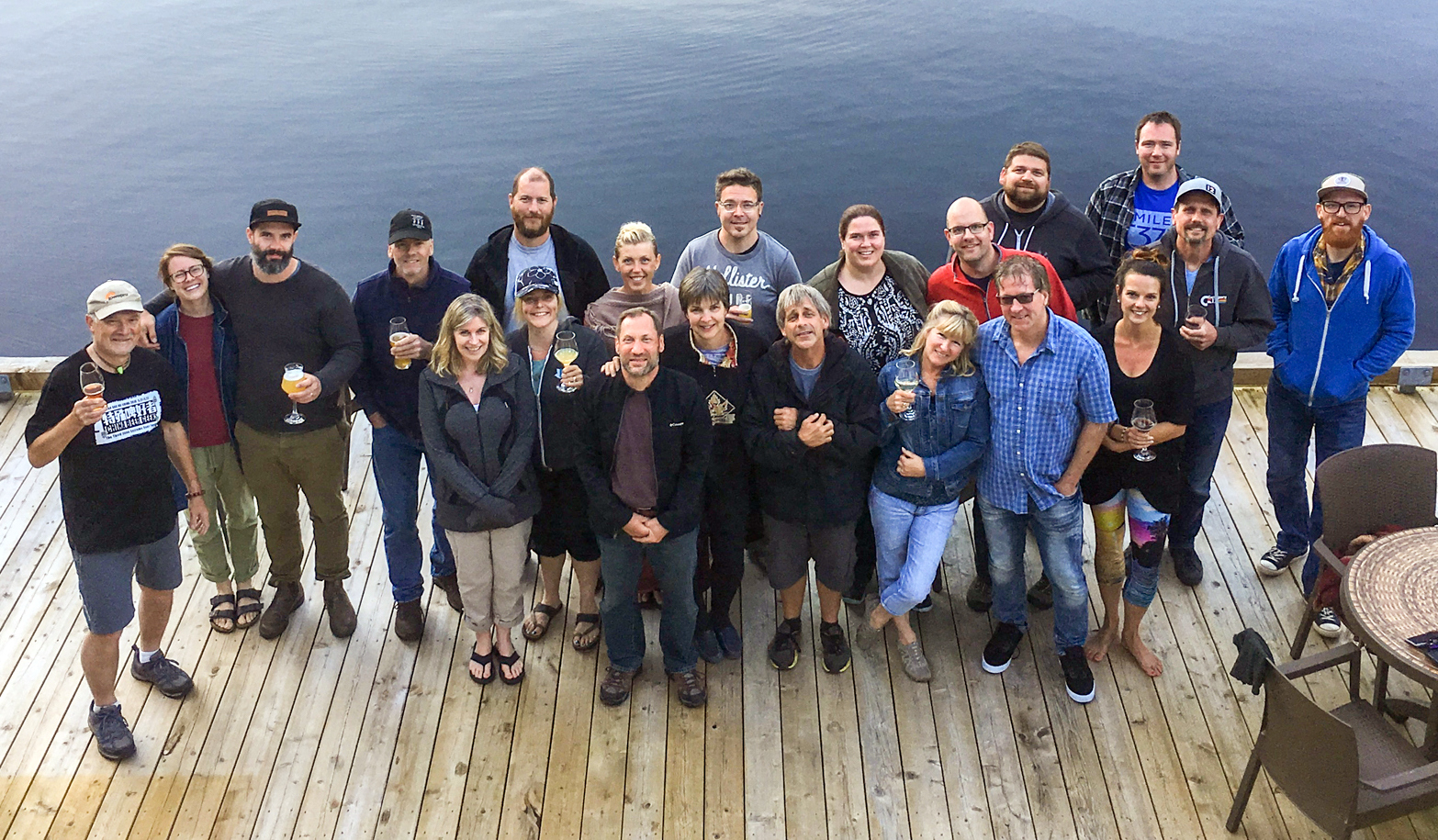 Craft Beer & Wilderness Retreat. Each part of this title anticipates enjoyable experiences: Craft beer, something for which you presumably have an interest/extreme liking/untreatable obsession. Wilderness, when combined with luxury is an undeniable draw. Retreat brings to mind isolation with beer geeks and brew masters – no hardships there at all! Blended all together they produce an unforgettable experience!

This five-day retreat encompassed many activities, including yoga, kayaking, fishing, sightseeing, and a day of brewing a collaboration beer that will eventually find its way into all the participants’ fridges.

Historically, Nootka Sound/Friendly Cove is one of the most important places in the formation of British Columbia. The Spanish and British arrived around the same time in the late 1700s, and Captain James Cook’s shwip once took refuge in the Cove. The Mowachaht/Muchalaht people welcomed them and traded otter pelts and other items. More importantly, the first beer in British Columbia was brewed at Friendly Cove in 1792. Spruce tips were used in it, providing vitamin C and preventing scurvy. It would have tasted quite different from the hop-infused ales we are used to today. But it was beer, and the crew was happy.

More than 225 years later, here we are at Nootka Sound with two kegerators, a selection of 18 craft beers on draft and a fridge full of bottles and cans. In each guest room there was a specially selected beer chilling on ice, a large cooler pack and a take-home gift: a growler-sized stainless-steel keg.

First, a chartered bus took us two hours west from Campbell River via Gold River on a logging road heading towards Tahsis, arriving at Nootka Wilderness Resort. Then a thirty-minute high-speed boat ride delivered us to the floating Nootka Sound Resort. Here, the warm, friendly staff greeted us by name and escorted us to rooms on one of the four floating barges. The view, looking north, is both expansive and gorgeous.

The hosts for the five-day event are Dennyse and Brad Harris. This couple has the combined passions and experience to make the retreat second to none. Dennyse is an experienced special events organizer. Brad, a doctor, is also a passionate homebrewer who donates his beer to fundraising for many causes. Brad states, “Our vision was to create something that couples can enjoy together, beer hounds or not.”

He continues, “I love beer in all its facets – drinking it, talking about it, making it, but even more, the social aspect of it. I wanted to share that with people, to make it a beer incubator for ideas and craft beer brewers. I love my back yard and wanted to share that too. We have travelled around the world (literally for 365 days) and while there is obviously so much to see, there is still so much to see right here. We thought we should combine forces and host this annual event.”

About selecting the VIP guests, Brad says, “We targeted Brent Mills first. I’ve loved Four Winds from my first sip of their Saison. Cedric Dauchot was the next obvious choice—Powell River is an “honorary suburb” of the Comox Valley. Cedric is Belgian, Townsite Brewing is awesome, and he’s one of the nicest people on earth. I asked Brent who he would like to share the retreat with and he came up with Michael Kuzyk. His homebrew background and PhD spoke well to me, and we asked him.”

I was curious what the challenges are in hosting an event like this in the wilderness of the West Coast of Vancouver Island. Brad states-“Logistical challenges; HAH! That’s part of the allure for me. Who in their right mind moves a nanobrewery, 2 kegerators, 18 kegs of beer, 12 cases of beer bottles and $1200 worth of beer glasses to a floating fishing resort on the wild west coast of Vancouver Island? I kept waiting for someone to tell me it was stupid, but nobody did, so we just kept going. The transportation logistics alone were daunting.”

Brad talked about the beer created on brew day at the resort. “For my setup, we brought back six carboys. One has the wild yeast that we collected from Friendly Cove; it actually worked. It smells amazing; there is a distinctive tropical fruit aroma to the yeast. Another carboy was dry hopped with a lot of Mandarina Bavaria and I used Wyeast 1318; London Ale III which is the most commonly used yeast for NEIPAs. I used Brett Trois Vrai in another, and then one carboy had Saison yeast fermented very cold, and another had the same yeast fermented very hot. I plan to finish off and package the beer into bottles and we’ll ship the ‘suspended yeast samples’ to the guests. There will be a lot of beer, and what happens with it mostly depends on whether any of it is good or not. I do have 2 mason jars of clean wild yeast from Friendly Cove. Matt and I picked berries and leaves that were growing out of the fallen totem pole and gave a little thank you to the spirits, so I have high expectations for that yeast in the future.”

I asked the brewers what they thought about the five-day event. Brent said “I had an amazing time meeting new friends, sharing great beers, and exploring a part of the world I’ve never known. The thing that surprised me the most was the history of the area from the first peoples to the European explorers. Just amazing!”

Cedric confirmed, “It was a super fun! Everybody was interested in craft beer and it was fun to be able to sit down, relax and talk about our industry. The resort and the environment were amazing and there were so many beers to taste and talk about. The Nootka lighthouse and beach visit was really an amazing highlight for me. It was so nice and relaxing to walk around with the other brewers and guests, listening to the sound of the waves crashing on the rocks. That was pretty sweet.”

Michael Kuzyk states about the overall experience, “Absolutely lovely! It was very relaxing; the guests were delightful, and the beer and food was unparalleled!”

What are the plans for next year at CBW? Brad replies, “Next year we will be focusing on Brewsters—female brewers. We will have two Cicerones there to pour and talk about the beers. I already know, for next year’s food pairing, I want foie gras done two ways, to complement and contrast with whatever beer we get for that course. There will be elk in a more robust reduction; there will be smoked sable fish and hopefully oysters. We will work on the crabbing more consistently and hopefully cook up a lot of crabs. We’ll have the Cicerones lead beer appreciation seminars, so it will be more formal than just chatting by the kegerator tap. There will also be more standup paddle-boarding, kayaks and row boats next year.”

What’s Next? Looking Ahead to Year Two