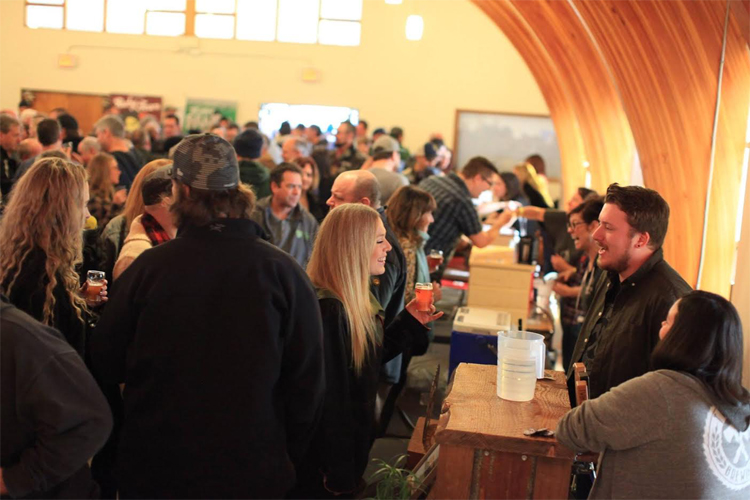 Featured image: Festival goers mingling, chatting and laughing while sampling craft beer, cider and spirits made in BC.

Since becoming involved with the Campaign for Real Ale Society of BC (CAMRA BC) about seven years ago, there are many things I am proud of being involved with related to advocating for changes to be made to BC liquor policies on behalf of the BC craft beer consumers and, at times, the craft beer industry.

Highlights such as being invited to sit down with government officials during the “consultation” with stakeholders during the BC liquor policy review and helping get Vancouver City by-laws changes to allow for the existence of on-site lounges at breweries were exciting to be apart of but I do not think there is anything I am prouder of than helping found the now-annual, CAMRA Powell River Craft Beer Festival back in 2014.

This year’s event, which took place Nov 4th in an deconsecrated church, was bigger and better than ever and, by all accounts, a huge success. I was like a proud Papa wandering through the event, watching Pow Town locals and visitors to the city alike, mingling, chatting and laughing while sampling some for the best craft beer, cider and spirits made in BC.

And my pride was not a result of me feeling a sense of accomplishment for helping organize a great event, because this year, I did not life a finger other than to tip a glass of beer during the festival. After I stepped aside as the CAMRA Powell River branch president last year, I handed the event off to the new executive to do with it what they wanted, and they not only kept the event alive, but added to the festival by including a pop up liquor store, raffles for some great prizes and increasing the tickets sold to 300, double what was sold at the inaugural event.

No, my pride was born from seeing that the event had grown from an idea I had 4.5 years ago, to try to raise the profile of craft beer in town, bring in beers to the market that were normally not available and solidify Powell River on the craft beer tourism map, take on a life of its own in town.

Yes, the CAMRA Powell River Craft Beer Festival has become a thing here in town and has played a role in helping create a great craft beer scene on the Sunshine Coast.

There are folks coming from the Lower Mainland and Victoria areas yearly now for the event. Locals are no longer waiting until the last minute to buy their tickets because the event sells out every year. Local hotels are getting business in a traditionally slow part of the year, and those guests are spending money in the restaurants and pubs in town. Brewery representatives are contacting the festival organizers asking to be involved. Local businesses are getting involved and adding to the event. Local charities and special interest groups are benefiting from the profits being donated back into the community by CAMRA Powell River.  Local media are taking notice and wanting to highlight the event.

The event has grown in size, stature and popularity.

Year one , 2014,saw me calling up old friends from the craft beer community and asking them to come be a part of something new here in Powell River. Many came as a favour to me, believing they had little chance to make sales here in an isolated, small market where Townsite was just beginning to make waves and introduce craft beer to locals. We had eight breweries, one cidery, one distillery and one beer importer pouring their products. We managed to sell out 150 tickets, but I would say 40% were people from out of town that I had contacted via the CAMRA grapevine. Many of the locals who attended had never been to a beer festival and were amazed that you could drink green apple pie ale, or double IPAs. Two bars in town provided venues for after parties and made it a full day of craft beer revelry.

The festival made a little money and a few hundred dollars were donated by CAMRA to local charities.

But the seed was planted, and the event began to grow.

CAMRA Powell River’s membership grew. Persephone Brewery folks, having liked the Powell River event so much, fashioned their own Sunshine Coast Craft Beer Festival after the event inspired by their experience in Powell River. Brewery representatives who attended promised to be back (and many have been back every year since).

The craft beer boom began to drift up the Sunshine Coast, lured here by the success of Townsite & Persephone breweries, and many of the breweries who attended the first festival managed to get their products onto the shelves of local stores or poured from local taps in the few establishments that were willing to bring them in.

The 2015 event saw 175 tickets sold, 15 breweries, two cideries and a distillery. We invited breweries located in the Courtaney/Comox area involved and they happily came over establishing a strong craft beer link between our communities. More locals bought tickets, although there was still a strong out-of-town contingent at the event. A local bar added an event the night before the festival and were slammed with those wanting to get a head start on the weekend. More beers made their way into the market in liquor stores and bars/restaurants. And again, a few hundred dollars were donated to local causes by CAMRA Powell River.

The third year saw similar growth with 200 tickets sold with little need for advertising. About 70% of the tickets went to locals. New breweries participated and the Ale Trail was featured heavily, with 8 of the breweries participating being located on the loop from Gibsons up through Powell River, over to Comox and down to Naniamo. More local businesses wanted to be involved in the event and in drawing the festival goers to their establishments. The festival grew from an oddity put on by some fringe beer group to a yearly expectation from a well-established local organization.

And due to a combination of figuring out the best way to do things and thirsty attendees, over $2,500 went to local charities.

I did not think the event could get better, but this year, it was off the hook with 17 breweries, one cidery, one distillery. Three hundred tickets sold. An on-site, pop-up liquor store. The festival turned into a weekend celebration with parties the night before, just prior to and after the event. And it looks like more than $3000 will go to local charities this year bringing the total donated by CAMRA Powell River to the community to over $6000 in four years.

As well, CAMRA Powell River is going use funds from the festival and funds donated by Townsite Brewery to launch an industry education incentive program where they will help fund the education of local servers at participating craft-beer-friend business to get their Level 1 Cicerone certification in hopes that better educated & informed servers will provide a better experience for craft beer consumers in town.

And once again, the event drew beer tourists to town, raised the profile of CAMRA and craft beer amongst locals and provided a great weekend during a traditionally dreary and quiet time of year in Powell River.

It may not sound like much to folks from Vancouver and Victoria who see festivals with thousands of people attend, but here in Powell River this is a big deal. Considering that craft beer arrived in town only 5.5 years ago when Townsite rolled their first keg out the door and that 4.5 years ago 99.9% of locals thought CAMRA had something to do with photography, it is very gratifying to have been a small part of helping grow the craft beer scene here and even more gratifying that I can now step back and let the next generation of craft beer lovers drive the train while I sit back and enjoy a cold one. The current CAMRA Powell River executive, who I have to say did an amazing job with this year’s event, are already thinking to next year.

I for one, can hardly wait and I am sure, even though I will be two years removed form the organizational aspect of the event, be once again a proud Papa.