As part of What’s Brewing magazine’s 30th Anniversary celebrations, we’re proud to pay tribute to some of BC’s beer advocacy pioneers. The story of these people is also, to a significant degree, the Genesis of BC’s craft beer community. These folks include Phil Atkinson, the original and longest-serving Editor of What’s Brewing, beginning back in June 1990. See page 8 of our Summer 2020 magazine for more about his contributions. Also Dave Preston, Steve Fudge and Ian Lloyd; you will find them in a list of past What’s Brewing editors on page 9. Then there’s Gerry Hieter, the long-time Chairperson of Great Canadian Beer Festival. Each of those people was a beer community leader.

The next person we’re about to name is one of the most respected figures amongst long-time BC beer community “insiders”. At the same time, he’s likely unknown by beer fans outside of those circles as well as beer industry folks who are newer to the scene. So, by way of introduction, let us mention this about our special guest:

Our guest also wrote a long-running column for What’s Brewing called The Hopbine that presented news and notes along the lines of our present-day Hopline…beginning three decades ago. Without fail, it contained an impressive collection of facts. And his high standards haven’t changed even as he’s reached 80 years of age: he checked over his commentary below twice and made sure to catch even the smallest typos. So allow us to introduce you to a fellow of high quality: Mr. John Rowling.

From the Magazine: 30th Anniversary Series 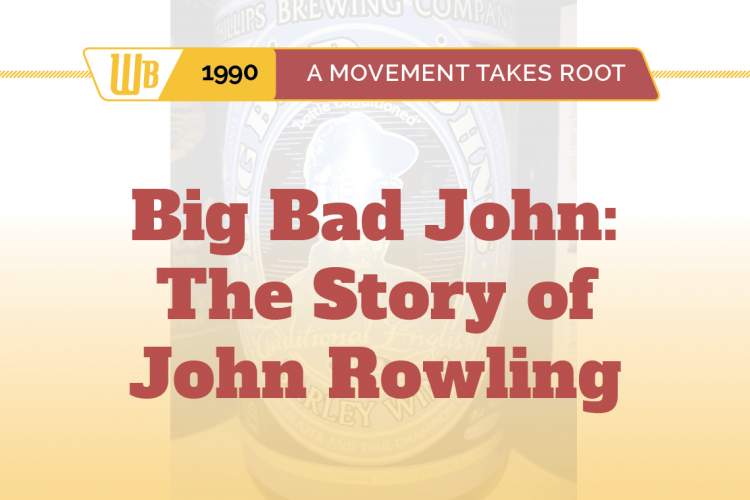 John Rowling spent his youth in the suburbs of London, England, where he attended Eltham College and Imperial College London. In 1962, he emigrated to Canada, landing in Fredericton to further his studies at the University of New Brunswick. For some time, his career centred around the oil business in Calgary. Then, in 1987, a government position brought him to Victoria. This would be a fateful move for BC beer enthusiasts.

We asked John how he came to co-found CAMRA Victoria.

here did it all start? My brother Rob joined CAMRA UK in 1974. He started a branch in Boston, Lincolnshire, and soon after became president. Thereafter, every time we visited England the CAMRA Good Beer Guide was our tour guide. We weren’t allowed to go in a pub if it wasn’t in the GBG!

Visiting Spinnakers Brewpub in early 1998, I asked if the “Real Ale” sign behind the bar meant what it said. I was told about their regular Friday cask program. On the bar were application forms for CAMRA Canada [which was based back East], so Carol and I quickly joined.

For a while, all went well. I even wrote a report on what was happening in Victoria for CAMRA Canada’s version of What’s Brewing. But by late 1989, things were not going too well for the society, and we wondered what had happened to our memberships. CAMRA Canada faded away a few years later.

CAMRA BC Finds A Home

Early in 1990 I stopped in at Gavin Welch’s Hobby Beer and Wines in Shelbourne Plaza out of curiosity. He mentioned that another CAMRA UK member was interested in getting CAMRA started in Victoria and so I met Phil Cottrell. He was also an unhappy CAMRA Canada member, so Phil and I spent an evening on the phone to the President trying to persuade him that sending money to Ontario didn’t do anything for us.

We decided to go it alone. Phil invited [future CAMRA Victoria president and Great Canadian Beer Festival organizer] Dave Preston, Carol and me, and a couple of friends for a meeting at Spinnakers on the evening of April 7th, 1990, and that was the start. Nobody wanted to be president so I got stuck with the job!

The second meeting was in May at Swan’s Hotel & Brewpub. About 25 came, including [future CAMRA BC society president and GCBF director] Phil Atkinson, and Darlene. (Swans owner, Michael Williams, stuck his head in to find out what we were doing.) We formed an executive of me and the two Phils. We also collected a dollar from all present so we could mail out a newsletter. Shortly after this, Phil Atkinson took over the newsletter and christened it “What’s Brewing”. The first issue under that name was June 1990.

We decided to incorporate as a BC society, and while we were discussing this Phil Atkinson pointed out that there had been a Vancouver-based CAMRA BC incorporated in 1985, but that it was no longer in existence. We therefore went ahead and applied for incorporation and it was approved September 24th, 1990.

Victoria was the only branch at first, and for a while. For several years we distributed free copies of What’s Brewing in pubs and homebrew shops. Some members were of the opinion that this was allowing the public to get a membership benefit without actually joining. I felt that this was an advertising device to get new members, so I exercised presidential authority and for two years we continued to give out free copies. For the most part we were a harmonious and enthusiastic group brought together by our passion for all things beer.

Don Harms was the bar manager at the old Fogg N’Suds on Broughton Street. We haunted that place as it really did have 80 Beers from Around the World: some lunch hours we’d try three or four American or Belgian beers. Don suggested that we hold the third meeting at Vancouver Island Brewing [not in its current location, but out in Saanichton, not far from where Category 12 Brewing is today – Ed.]. The brewery had just changed its name from Island Pacific Brewing. Dave Preston’s friend Graig Piprell wrote a great article in Monday Magazine about the new microbreweries in Victoria and promoted our meeting. To our delight and astonishment 70 people showed up.

For most of us, it was our first visit to a real brewery. Incidentally, we were told that VIB was brewing 10,000 barrels a year of draught, and that year had just obtained a bottling line. We were, for the first time in nearly a decade, going to be able to drink locally-brewed bottled beer! 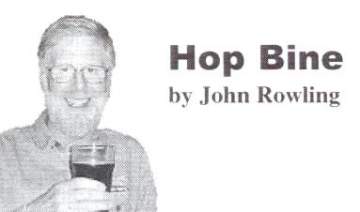 You’ve read the story of John Rowling. Now, from John’s point of view, here is a description of his ongoing column The Hopbine, which was the precursor to our current weekly newsletter The Hopline.

I wrote a column for our first issue of What’s Brewing, and needed a name for it. I was growing a hop bine [as the vine of the hop plant is known] in the garden, and I realised that its twisted stem just about described the twisted content of what I was writing.

I was writing about any item to do with beer that didn’t warrant a full article. I covered everything from, say, a new beer at a brewery (not very frequent 30 years ago!) to a ragbag of trivia news from around the world, beer book announcements (also rare) and new brewer appointments (even rarer), all scattered with my own opinions and comments.

Sometimes I’d report sales figures when available (mostly to do with what were called microbreweries in those days). By the way, in 1989, the per capita consumption of all beer in BC was 79.2 litres, and by 2019 it had dropped to 60.6 litres per person. See, I can still find these little useless gems.

When we started, there was room for lots of trivia and snippets of international news. I had a full-time government job, and there were so few breweries and brewpubs in the province that it was easy to keep up. If I was expected to write a monthly version of The Hopbine with today’s BC brewery numbers, it would fill What’s Brewing and I think I’d be overwhelmed!

[Editor’s Note: John, you only have to ask current Hopline editor Edward Kaye, also a Victoria native, to find out!]

John Rowling ends up on a collector’s beer bottle label

Big Bad John’s Barley Wine was released by Phillips Brewing Company in 2002. On the embossed white label of this striking blue bottle, John is recognized as a ‘trailblazer’ with the inscription ‘Giants Fear Him / Taste Buds Applaud Him’. Considering that this was produced only one year in Matt Phillips’ brewery ownership, he displayed an impressive sense of history. We asked John about his reaction when he found out this beer was coming, and what he think prompted the tribute.

Matt Phillips had been brewing at Spinnakers since 1999. We were excited that he was brewing such great beers and bottling them. We knew that he was broke, so we supported him a lot. Also, by then, Gerry Hieter and I were well known for doing everything in our power to promote the craft beer industry through Great Canadian Beer Festival.

I was surprised and rather embarrassed about the tribute, as I thought he would have chosen John Mitchell or Frank Appleton before me. It was supposed to be the first of a series of specialty beers honouring various BC beer people. But Matt hadn’t figured the cost of the bottle, labels, and so on, and I believe he lost money on the project. He gave me a dozen bottles and I still have one in the fridge.

[Note: Phillips would later issue a tribute to John’s pal Gerry in the form of Cherry Hieter, a smoked cherry ale.]