As part of What’s Brewing magazine’s 30th Anniversary celebrations, we’re proud to pay tribute to some of BC’s beer advocacy pioneers. The story of these people is also, to a significant degree, the Genesis of BC’s craft beer community. These folks include Phil Atkinson, the original and longest-serving Editor of What’s Brewing, beginning back in June 1990. See page 8 of our Summer 2020 magazine for more about his contributions. Also John Rowling, who we featured last week. In addition, there’s Dave Preston, Steve Fudge and Ian Lloyd; you will find them in a list of past What’s Brewing editors on page 9 of our current issue. Each of those people was some form of beer community leader.

Then there’s Gerry Hieter, the long-time former Chairperson of Great Canadian Beer Festival. Gerry has a background in the the brewing industry that we describe below, and stories going back to the 1980s. So without further ado, we now hand over the mic and let him tell us about the good ol’ days.

From the Magazine: 30th Anniversary Series 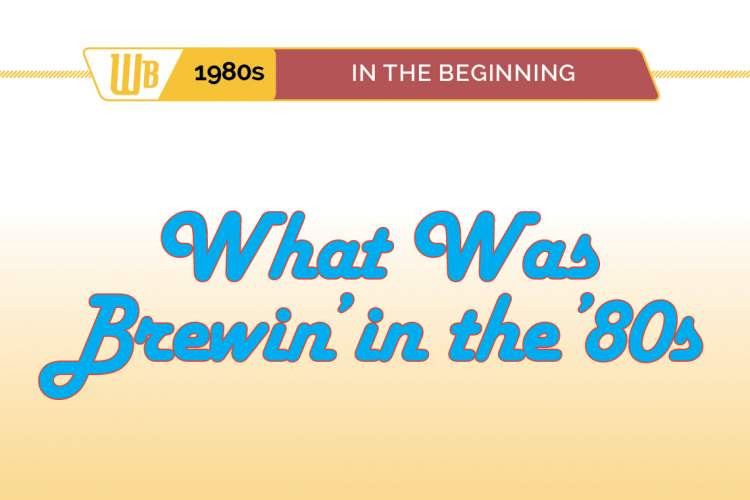 It’s hard to imagine that it was 38 years ago when the first ‘micro-breweries’ in B.C. began operation. A lot of the consumers, brewers and brewery owners of today are not even that old!

1982 was, of course, the year Horseshoe Bay Brewing opened its “cottage brewery” doors down the hill from the Troller Pub. Since this has been chronicled in detail elsewhere, I will not dwell on this most important event. Having said that, here is a shout-out to beer pioneers Frank Appleton, and the late John Mitchell, for their efforts.

1983 was a busy year for brewery start-ups here in B.C., as a number opened their doors in order to capitalize on the success of Horseshoe Bay. It is particularly important to mention that Saanichton’s Prairie Inn Neighbourhood Pub & Cottage Brewery began brewing that year (with the “cottage brewery” operation in a separate building from the Pub, just like Horseshoe Bay). Although this was an extract brewery suffering from infections, the timing of their venture makes this a significant point in our brewing history. Brian Mayzes brewed there for many years.

Bryant’s Brewery (1983) in Maple Ridge was the brainchild of Peter Bryant who hired Peter Haupenthal as his brew master. Haupenthal later brewed at Dockside Brewpub in Vancouver where he brewed the first hibiscus lager in B.C. They brewed Bryant’s Lager and an ale called Bullfrog Bitter, and tried to sell kegs to bars and pubs with little success. Bryant sold the brewery in 1984, then brewing stopped two years later.

Mountain Ales (1983) was founded by Frank Berezan, who hired Frank Appleton for his expertise to set up an ale-focused facility in Surrey. Expecting the beer to sell itself, Berezan found out that wasn’t going to happen, so he applied for an export licence and sold his beer in Seattle and Portland, beginning in 1984. Roger Thirkell was the original brewer and later his assistant Geoff Boraston took over to brew two ales: Mountain Malt (dark ale) and Mountain Premium Ale which it was hoped would be the flagship beer. The brewery closed in 1987 due to lack of sales.

Similar marketing problems plagued Island Pacific Brewing (now Vancouver Island Brewing). The fledgling brewery in Saanichton had hired Frank Appleton to locate the equipment and commission the brewery in 1984.  They also struggled with several infections, causing sales to suffer. Fortunately, they brought in Bavarian brew master Hermann Hoerterer whose recipes and procedures were responsible for a 750% increase in sales in one year.

Hermann was also instrumental in creating recipes for Okanagan Spring Brewing and was my partner in the original Whistler Brewing crew (locating equipment in Germany and creating the Premium Lager and Black Tusk Ale). Hermann remains one of the least known and under-rated brewmasters in B.C. craft beer history.

Spinnakers Brewpub, founded 1984 by John Mitchell and Paul Hadfield, has had more than a dozen great brewers over the years including Lon Ladell and Matt Phillips. Notwithstanding a few hiccups along the way (like franchising brewpubs in Seattle) this stalwart is still thriving today.

Aside from Mitchell and Hadfield, another important figure at the time was Mitch Taylor, the founder of Granville Island Brewing (1984). Mitch advanced the cause of every craft brewery of the time with his lengthy negotiations with the BC Liquor Distribution Branch. GIB went on to produce one of the best German-style lagers ever made in B.C.

Founded in 1985, Okanagan Spring Brewing is now shunned by craft beer enthusiasts, but back in the day, their Old Munich Dunkel-weizen and Old English Porter were unequalled in quality and flavour. The brewery was sold to Sleeman Breweries Ltd in the 90s and has never been the same since.

Shaftebury Brewing (1986) was started by the now-famous duo of Tim Wittig and Paul Beaton in 1988 and was the original East Van brewery, located on Pandora Street. They were the first ale-only brewing operation to succeed and many now-famous brewers have emerged from their ranks. These include Barry Benson, Iain Hill and Michael Stewart, who have all gone on to become household names in B.C. brewing. The brewery eventually moved to Delta but was sold to Sleeman, who shut the brewery down and moved production to the Okanagan Spring plant in Vernon.

North Island Brewing started up in Campbell River in 1985, and brewer Erik Mairs produced two lagers. One was an adjunct beer while the other was an all-malt lager with a reddish tinge and very nice flavour. The North Island market wasn’t ready for these beers, and the brewery closed in ’87.

Swans Brewpub was opened in Victoria in 1989 by Michael Williams. He employed Frank Appleton to secure equipment and hire their first head brewer, Sean Hoyne, now an industry giant with his own successful Hoyne Brewing Company. Swans remains a beautiful and successful operation today.

I would be remiss if I didn’t mention that my own Whistler Brewing Company made the ’80s list by opening on Thanksgiving Day, 1989. Whistler found a brewhouse and bottling line in Germany and fermentation tanks in B.C. to brew a lager, an ale and a dark ale in its first years.

The 80s were an incredible time for growth, but back then, small-scale brewing equipment was hard to find, and raw materials could not be purchased in smaller amounts to match the production capabilities of the many new breweries in the province.

It was hard to source proper brewing equipment at all in North America. One manufacturer was convinced that selling systems that only used malt extracts would be more attractive to microbrewery investors. They pitched extract-based systems as “easy to make beer as it is to make soup”. Lots of entrepreneurs fell for this nonsense so extract brewers were in evidence all over B.C. These included the aforementioned Prairie Inn, as well as the Terminal Hotel Brewpub in Nanaimo in what is now the Cambie, The Leeward Pub in Comox, Sunshine Coast Brewing in Sechelt, Steveston Brewing and Victoria Brewing and Malting. If you have never heard of any of them, that’s because the products produced by these now-extinct breweries were of less than ideal quality.

Marketing was also a major problem. It was not uncommon in those days for the sales rep of a small brewery to be told to “Leave my pub and take your hippie beer with you.”

Today, I can go into any liquor store, tasting room, tap house or pub and find a pretty good selection of craft beer in a wide range of styles. Times have changed indeed.

Before co-founding the Great Canadian Beer Festival, Gerry Hieter also co-founded Whistler Brewing Company in 1989 as noted above. Then in 1998, he co-founded Lighhouse Brewing. So his legacy includes Canada’s longest-running beer festival and two major BC breweries. He is also a former Executive Director of the Craft Brewers Association of BC.

Still, Gerry, who often just goes by ‘Ger’, is as down to earth as they get, working humbly on behalf of the craft beer industry for years. No wonder he’s been celebrated from time to time.

In last week’s installment focused on Gerry’s pal John Rowling, we mentioned that both Gerry and John were recipients in 2019 of the BC Beer Awards Legend award, a form of lifetime achievement recognition in BC craft beer. However, it wasn’t the first time Gerry was called onstage for that type of recognition.

In 2011, at the Great Canadian Beer Festival’s post-event Volunteer Party, Gerry was honoured for his lifetime achievements by none other than the Queen herself. It might have been a little less official than the BCBA plaque, but it was meaningful nonetheless!

Gerry gets his own beer too

In last week’s installment, we also mentioned that Matt Phillips of Phillips Brewing Co. had paid Rowling tribute in the form of a 2002 barley wine entitled Big Bad John. In 2014, Matt finally paid homage to the other member of the Brewsome Twosome when he released Cherry Hieter, a smoked cherry ale.

Beer Me BC describes the red-coloured ale as ‘brewed using real cherries and house smoked malt’, posessing a ‘ depth of smoke with a sweet and sour tone of cherry’. It’s listed under ‘Past Beers’ on the Phillips website, so we don’t know if we’ll ever see it again.

If you’d like to read more about Sir Gerry, you’ll find a profile on him courtesy of the BC Ale Trail website. Check out: The Hiet Is On by Matt Carter →