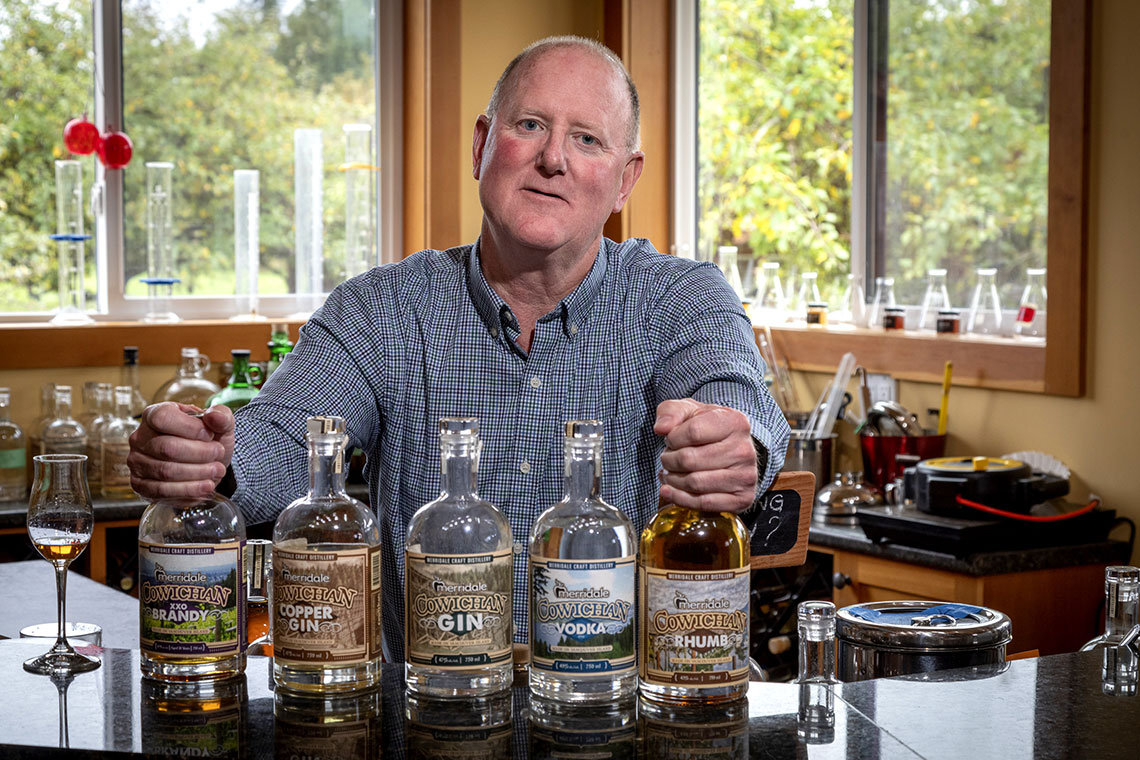 Merridale Co-Owner Rick Pipes first learned about distillation when he and Janet travelled to Europe to study cider making. After that, he took a five-day distilling course at Michigan University. It was enough for him to learn the science of it; he maintains that distillation is not that complex. “The most important part about turning out a good finished product is putting in a good product”, Rick comments. “Good inputs—easier to get good outputs.”

The base ingredient for Merridale’s distilling is mostly cider. “We have done cherry, grape, quince, peach, pear, plum; you name a fruit. I have also done a barrel of whisky. You make wine or cider and then boil it.” They do 200 litres in a batch, which boils down into 11-13 litres of usable product at 70% ABV, before dilution.

Merridale’s still is a wood-fired beauty made in Germany by Mueller. The pot is copper, and atop the pot is an onion, or ball, that’s used for making brandies from Merridale’s ciders. In the centre is a reflux column—basically for second distillation—and then the condenser. All of the copper in it is ‘active copper’, helping to bind sulfur and clean up things that cause off-flavours. “We don’t add any sulfates to our cider, but sulfur can occur naturally in fermentation”, Rick explains. “The copper helps to give a softer, smoother product at the end of the distillation.”

“The science is pretty simple: different liquids have different boiling temperatures”, Pipes continues. “The heat is your accelerator; the cold is your brake. So, all you are doing is feathering acceleration and braking to control the separation of the components you put in.”

“The longer the chain, the higher the boiling temperature. Methanol is a single carbon alcohol; it boils first, around 63°C. Ethanol, a two-carbon, boils at 73°C, and isopropanol and butanol come off above 80°C and 90°C. The first thing you are going to get is the heads: methanol—that is not good for you.” That’s why, Rick says, “If you drink too much of your friend’s moonshine, you get headaches and go blind.”

Sounds like a good thing to avoid. So, is it dangerous to be tasting during distilling? “I have tasted a lot of methanol”, Rick admits. “Probably at some point, I am going to go senile and wish I didn’t drink so much of it. It’s in the air anyways. It’s not dangerous—if you drink low-quality wine, it has methanol in it—overall just a little rough.”

Rick continues, “Ethanol is the ‘hearts’; a good, pure vodka, distilled to 95% ABV then diluted down to drinking strength of 40%. After that, there are the ‘tails’: isopropanol, butanol and a whole bunch of what are called fusel oils. The tails are not all bad or all good; the distiller needs to decide.”

As a student in Rick’s distillery, I think I am starting to understand the science. But Rick adds, “Although the science of distillation is not that complex, the art of distilling takes years to become skilled at and is a craft which can be improved perpetually.”

For instance, he continues, “In our pear brandy there is a very oily component to the skins of the pears. That oily texture gives it a very nice mouthfeel and flavour. So we go quite deeply into the hearts on our pear brandy. On the apples there isn’t any oily component, so we cut our hearts fairly tight. That’s where the art comes in.”

Where does Rick get the inspiration for his different styles? “I am a believer in distilling and amalgamating ideas”, he reports. “I see something in the wine or food world and put it in my memory.”

Merridale has a seven year old apple brandy, an eight year old pear brandy, a ten year grape brandy and a twelve year cherry brandy. These are probably the longest-aged examples in North America. “You can find ten year old grape brandies all over Europe because they have got history”, Rick compares. “We don’t. So we decided not to release our brandies until the three-year mark. Now, we use our early entry as an advantage. I think it has paid off.”

The results from Rick’s inspiration and creativity have won multiple prestigious awards at competitions held by the American Distilling Institute and Artisan Distillers Canada. This, despite the fact that Rick’s spirits are 47% ABV, which judges can find “hot”.

Looking ahead, Merridale’s upcoming Distillery & Brewhouse in Victoria will create whiskies from grain. The tasting room will allow guests to sample beers made from the same wash the whisky will be made from, so guests can taste the source.

Rick reveals that there is a way to speed up the process of aging whiskies, by using a controlled-environment barrel room which mimics the four seasons. Each season will only be a month long, so one year will be the equivalent of three years of aging. Since whisky must stay in the barrel for a minimum of three years, Merridale’s product should have characteristics of a nine-year-old whisky when ready.

Follow their progress at merridale.ca/distillery. In the meanwhile, I must say I will be checking my local specialty stores to find his amazing craft brandy.