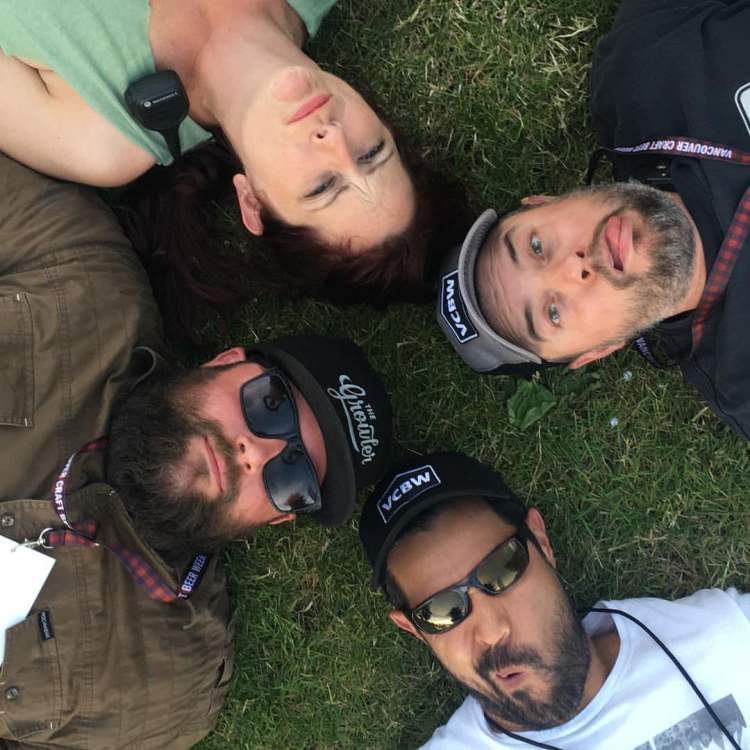 In a few short weeks, the 10th annual Vancouver Craft Beer Week will kick off. Running from May 31 to June 9, this year’s event series—and even the official VCBW beer—will celebrate ten years of amazing memories. Look for some of those stories on social media this month using the hashtag #TenYearsofVCBW.

It’s in that spirit that What’s Brewing reached out to VCBW’s four Directors: Festival Director Leah Heneghan, Marketing Director Chris Bjerrisgaard, Business Development Director Paul Kamon and Technical Director Tyler Olson. We’ve witnessed and studied the history of Vancouver Craft Beer Week, and as beer fans we have our own memories of the Week’s good and bad (well, challenging) times over the years. But we wanted to hear directly from the Foamy Foursome what their favourite and not so favourite memories are.

Thanks to this intel, we now know:

With that, we present to you an exclusive insider peek into the personal memories of the organizers of Western Canada’s largest annual beer event.

TEN YEARS OF BEERS: Q&A WITH THE VCBW DIRECTORS

What’s Brewing: You’ve held nine years of VCBW so far. Each one has been different. Which year’s VCBW is your personal favourite to date?

Paul Kamon: Favourites? They’re like our children! How do I choose??

I would say 2012, the “Rock Star Brewers” year, mostly because of one event: “The Hop-Headbanger’s Ball” with Sack Blabbath and Ham Valen. Beer, BBQ and the greatest back alley loading-dock cover band rock show EVER!

Leah Heneghan: After 10 years of VCBW they’ve all become a bit of a blur. 😉

To be honest, my favourite VCBW is always the one I’m working on. We like to keep looking forward and focus our attention on building a bigger, better VCBW every year. That’s the really exciting part for me – seeing what the future holds for our little beer party.

Chris Bjerrisgaard: Our second year at the PNE, VCBW 2016. It was the first time I got to walk around the Festival grounds and go “This is what we envisioned”, versus “We almost did it but screwed up here, here, and here”.

Tyler Olson: This year, our 10th anniversary, because I think we have dialed in the venue and the experience.

WB: Which year was toughest?

Chris: They were all tough, although if I had to pick one it would probably be at Olympic Village (VCBW Fest 2014). That was the first time we really were put to the test in every single way. Everything was a challenge that year, but I also think it was a make or break year for us.

Tyler: The year we were at the Olympic Village. No infrastructure, dust bowl, packaged product, and people peeing in the neighbourhood.

Leah: I’d have to agree with the others. That was the first year with zero infrastructure; not only were we not in a building, or under a big tent, but there was no running water and no electricity. Just a big open gravel parking lot, and with double the people than the year previous.

Paul: While the location was central, we had to secure and manage every single amenity (water, power, sewage, garbage, recycling etc) very carefully. This festival was costly and labour intensive. We moved to the PNE Fairgrounds the next year, which was a huge relief as all the amenities are built into the park already.

WB:  For a number of years in a row, VCBW and its marketing had a theme. Which of these was your favourite theme?

Chris: This one is tough because I developed the concept and executed every single one of the annual themes with one of my closest friends, Soren. But the one I probably had the most fun making was This Is VCBW (the 2012 Week’s rock’n’roll theme featuring a video with brewers acting like rock stars) because the whole thing was so ridiculous: concept, execution – all of it.

Leah: The rock star one makes me smile the most. We had an amazing time turning brewers into rock stars for the alter-ego poster series photo shoot was such a great time. In some ways it seemed like that was the year that truly launched VCBW into the festival that it is today.

Paul: “We’re All In” (with poker chips and a poker game promo video to complement the 2013 Festival at River Rock Casino) was my favourite marketing theme. It was a perfect metaphor of where the craft brewing scene was at the time. A big, ballsy gamble!

WB:  Ever since Year Two, there has been a VCBW Official Collab Beer, raising funds for charitable partners. Which of these beers was your personal favourite to drink?

Paul: TU MEKE was my favourite too. Steel and Oak and Strange Fellows created a close to perfect summer beer. A nice balance of subtle with a touch of exotic in a very sessionable beer. Delicious!

Leah: It’s a tie between the Campfire Kolsch (2015) and TU MEKE for me. And maybe the 2017 Hazy Pale. They were all such delicious, fruity & sessionable beers!

Chris: It’s a tie. Both TU MEKE and the Hazy Pale were incredibly tasty.

I ran the “Collab Beer” program for the first number of years and it was always the bane of my existence. Trying to pull that thing off every year is like herding cats. That said, I’m glad it’s still going as it has produced some awesome brews and ever better brew days!

Note: this year’s official brew is “10”, which will raise funds for the BC Hospitality Foundation. But besides the cause, you know it will be highly worth drinking because it’s from Four Winds Brewing (alongside Dageraad and Powell Brewery).

WB:  The VCBW kickoff event has been held at a number of locations. Which venue hosted your favourite Opening Night ?

Chris: Without question, the Alibi Room (2010). Nothing will ever compare to kicking off the very first VCBW at such a legendary venue in the craft beer scene. I will never forget that day, as it was the first beer industry thing I ever did; before that I had attended a few events, but I’d say that night launched my career in beer.

Paul: Alibi Room, forever and always. This historic location is where I learned to love beer.

Leah: In addition to being my favourite opening night venue, that’s where VCBW’s first meetings were held, back when there were about 12 of us around the table trying to figure out how to make this thing happen. I think of it as where our beer baby was born!

Tyler: Maritime Labour Centre (2018), because the brewery representatives were able to relax (with volunteers pouring beer) and it was more of a celebration for those industry attendees.

Note: year’s VCBW kickoff event will be held at Beaumont Studios, and you’re invited! Partygoers are encouraged to breakout their favourite silvery, sparkly and glittery bests for the occasion. Event details →

WB:  VCBW Festival was held at a different venue each year for the first half of its life. Which venue hosted your favourite pre-PNE Fest?

Leah: The River Rock Casino (2013). That was the first year we were a really sizeable festival; if memory serves we expanded from 700 attendees/day to > 2000/day. What an accomplishment that was, and it truly left me with a real feeling of “Wow. This is actually a thing! We’ve done something pretty great here.”

Chris: Olympic Village (2014). I know I said it was the toughest, and it was, but it was also the event that galvanized us and prepared us for the years to come. We took a beating that year and came out the other side, albeit sunburnt, dehydrated, and wishing we had never looked at that big dust bowl. That said, without having gone through that I’m not sure we would have landed at the PNE.

Paul: Also Olympic Village. While it was the hardest production to pull off, it was also very rewarding to see it sell out and be a weekend spectacle right in the heart of the city. We were the talk of the town!

Note: This year’s VCBW Festival will be held at the PNE Fairgrounds, where it’s been for five years running. Tickets still available at TicketLeader →

WB:  What’s your very favourite memory from the first decade of VCBW?

Chris: There is a photo (above) of Leah, Paul, Tyler, and myself laying on the grass after VCBW 2016. We’re broken, beaten, and exhausted. That said, I was also with three of the best partners a man could ask for, having survived yet another war.

Tyler: Counting twenties in the Sandman Executive with the team after the first night at River Rock.

Leah: There are so many amazing moments from the past decade, but my favourite? A few years back, the first year we had the (not so) secret garden at the VCBW Festival at the PNE Fairgrounds, I remember walking up there on Saturday afternoon, seeing it filled with smiling faces. People of all ages enjoying some amazing beer in the sunshine, dancing and having what looked like the time of their lives…well it was absolutely the best feeling. It really made this all feel worth it – that’s exactly the experience we were hoping to help create for people when we started out all those years ago.

Paul: Yes, Saturday prime time at the VCBW Festival in the “Secret Garden” with Mark Woodyard rocking the stage with thousands of people dancing and having a great time with the biggest and best craft beer and cider list in the land. It’s a dream come true.