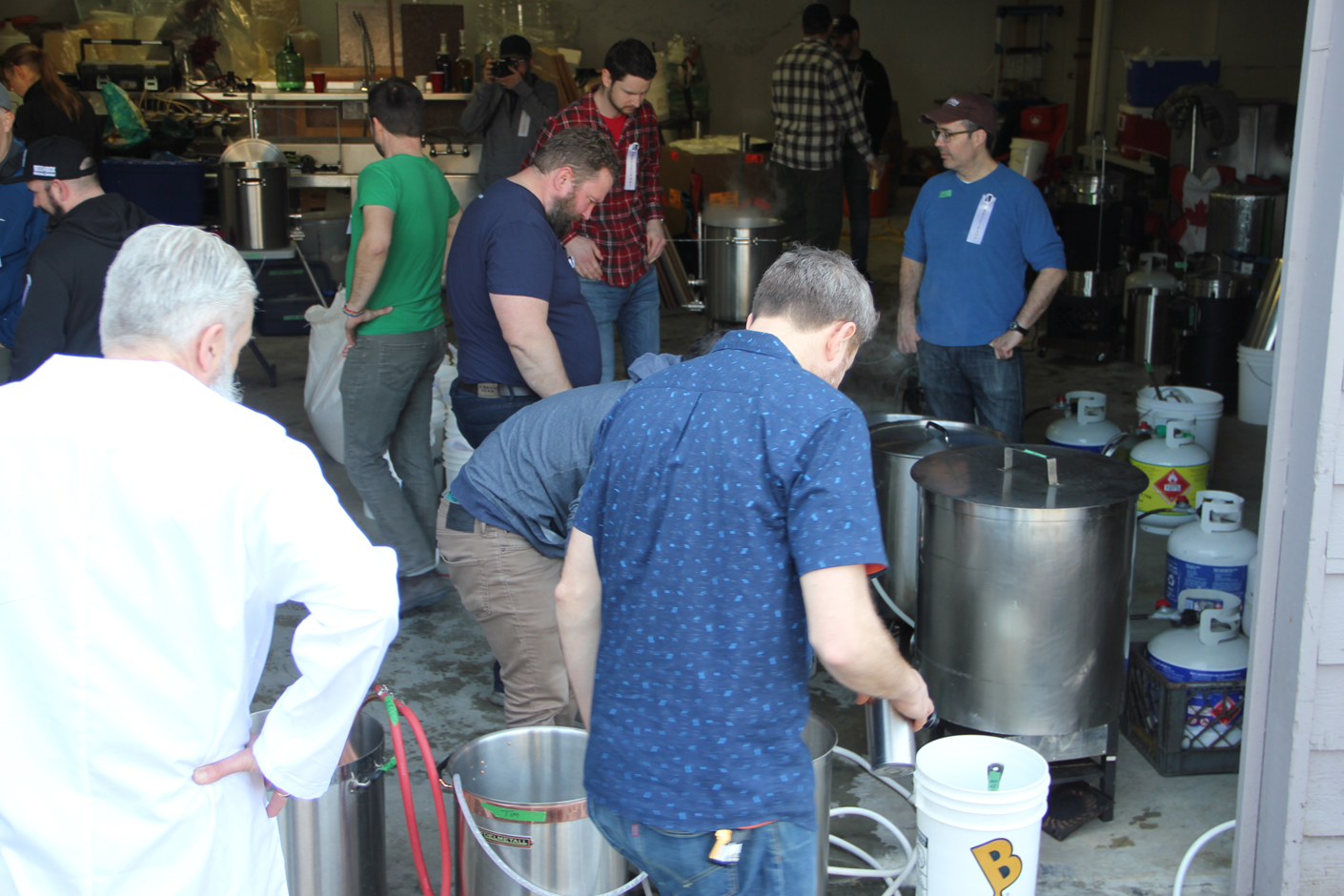 March 16th, 2019 marked the first annual Verrücktes Donnerbräu Festival brew day for a group of Lower Mainland homebrewers. The fest, whose German title loosely translates as “crazy thunder brew”, was a two-part experiment that began as a wacky 3 a.m. idea in the twisted brain of Tim Vandegrift. The difference between most people’s wacky 3 a.m. ideas and Tim’s is that he is just dumb enough to execute his.

Tim asked the Vanbrewers homebrew club if anyone would be interested in brewing almost every style in the BJCP guidelines in one day, as a group. He says it took a few days to explain his concept, but then other members began to get on board and discuss the logistics of brewing 25 beers in one day. What kind of equipment would be required, how many set ups, and how many people?

Graham and Kalinda Link helped Tim assemble the recipes, weigh and mill grains, and organize hops the night before the brew day. Each recipe was measured out into a bucket with a note of the hop additions and schedule.

Tim arrived around 7 a.m. on brew day to begin heating water. Bill Riley brought a massive pot that was used as a hot liquor tank (HLT), along with a pickup truck full of equipment. A dedicated HLT allowed for quick mash-ins without having to wait for the electric elements to get water to strike temperature.

Volunteers arrived around 9 a.m. and used a short and shoddy brew-day technique, allowing 20 minutes for mash and 20 minutes for the boil. Each of the 25 recipes was adjusted to compensate for lower efficiency. As each mash was drained off, the wort was collected into a kettle that went on to one of several propane burners for the boil. The next mash could be started right away. After cooling the wort and transferring into carboys, Leslie-Anne coded them for identification. A well-choreographed assembly line took form, and all 25 batches were knocked out and equipment cleaned up by 4 p.m.

To begin Part Two of the experiment, each carboy was passed to someone to ferment it. That person had no information on what is inside the carboy beyond what they can see, smell, or taste. It is up to that person to ferment the wort they have been provided with, hopefully using a style-correct yeast (or perhaps create a happy accident).

A tasting event is scheduled for Saturday, June 1st at 12 Kings Pub to judge the results. There, the judges will compare the finished beer to style guidelines that the recipe was designed for, take into consideration what the fermenting participant thought the beer was, and judge how well the result stands up. By the time you read this, the event will have taken place.

Tim’s research indicates that no group has attempted to brew this many beer styles in one day before, never mind the criss-cross yeast game. He believes that they may have set a world record and he even contacted Guinness and applied to have it verified and recognized.

At next year’s event, Verrücktes II: The Revenge of Donnerbräu, twice as many brews will attempted.
You can follow along with the madness by following the Verrüktes Donnerbräu Festival 2019 Facebook page.

Verrücktes Donnerbräu sincerely thanks Vanbrewers for helping make it happen, Imperial Yeast for donating all the yeast, both Central City and Sundown Brewing Company for lots of malted barley, and Fraser Mills Fermentation Company for the space, water, and carboys. Next year should be even more fun. Now go make some beer!