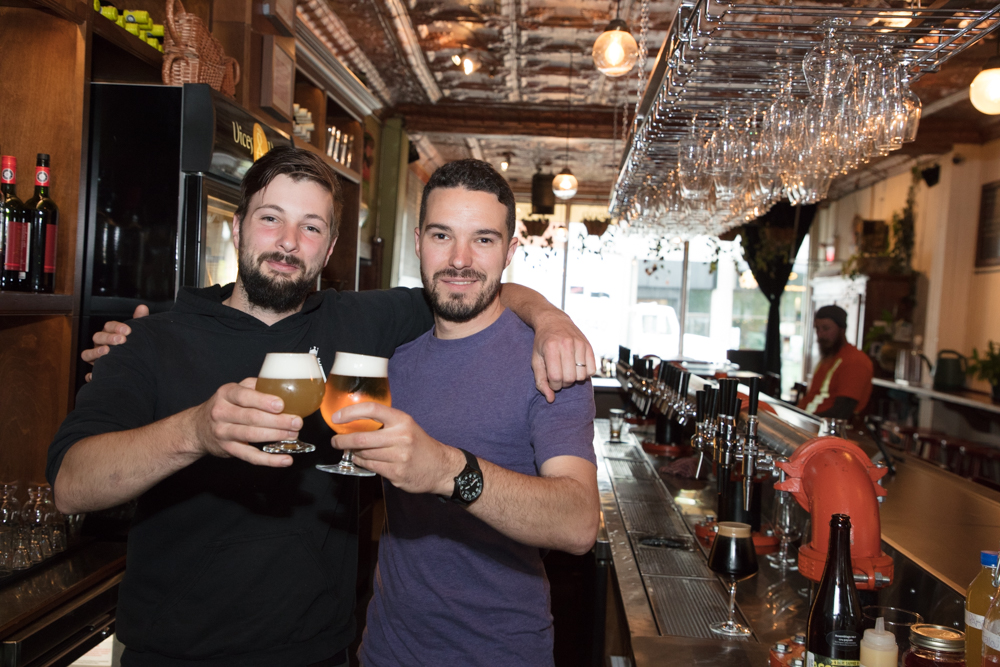 Every two years I have the opportunity to visit Montreal to attend a conference as an Association member of MSF (Doctors Without Borders). The  annual AGA (Annual General Assembly) alternatesbetween Toronto and Montreal every year. I always book a couple of extra vacation days to checkout each city in more depth. My first visit, back 15 years ago, was very disappointing on the beer front. Molsons and Labatts had a death grip on both cities. I would ask for craft beer and be told there were 6 different taps of Rickards and Moosehead IPA to round things out. It seemed that there was very little progress in the craft beer scene. I love the culture and food of these two cities, but I always left with a bitter taste in my mouth from industrial beer.

This past June I visited Montreal after a 4 year absence. It was like an alchemist had been running around the city turning bad beer into good! I discovered Montreal, and Quebec as a whole, are experiencing a craft beer revolution possibly even larger than the one in B.C. Every spare moment I had over my extended long weekend in Montreal I went out hunting for craft beer.
My first night I had arrived late from Vancouver – so I decided to just go for a walk and see what I might find. About 8 blocks from my dorm (McGill University) I found Bier Markt on Renee Levesque Blvd W. This is an upscale chain beer pub with an assortment of craft and industrial beers – something to please everyone kind of place. I found some local craft beers on tap that were very delicious – an hoppy IPA, complex Belgium triple and a creamy fragrant stout. The decor and friendly staff made for a very warm experience. Not bad for a random late at night walk in the deserted streets. The weekend was off to a good start! 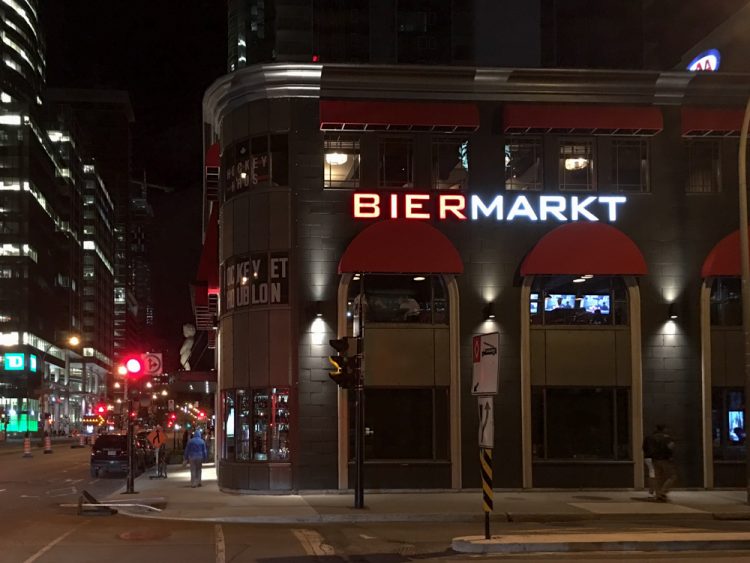 The next day my time was free until 5:30pm to visit craft brew pubs. Before leaving Vancouver I had contacted a number of them to make sure I could interview the manager/owners and brew masters during my short 4 night stay. The first was Broue Pub Brouhaha in the Rosemont district of Montreal. Situated on a corner, it looked like one of the bars from Nanaimo, where I grew up during my teens a few decades ago (actually many decades). Inside the rustic interior it was unpretentious and comfortable. Manager/owner Daniel Essiambre greeted me with a strong warm handshake and invited me to have a seat as he prepared a tray full of samplers. Enthusiasm spills out of Dan like a gurgling mountain spring. Be sure to ask for him if you visit any of their three establishments… yes three! Five minutes by car is their second location, MaBrasserie on Rue Holt. Brew Master Marc Belanger has been at the helm of this co op brewery since opening in 2015. Marc brews all of Brouhaha beers along with 5 other brewers who brew exclusively for their own brew pubs. In addition Marc teaches a beer school where home brewer and entrepreneur courses are taught. Usually classes have 8 to 10 ten students and are held four times a year. All recipes are made by Marc. Belgian Quad is their showcase beer – rated in the top 3 in Quebec. Marc’s style is predominantly Belgium and his Saisons and Belgium Quad (12%) shine. At the end of the tasting Marc and Dan shared a bottle of one year old barleywine (13%). Thick, creamy, fragrant and amazing … oops I had to leave for the start of the MSF meeting.

After my conference, two days later, I picked up on the trail of craft beer around the Ille de Montreal. Dan had invited me to come to the third location of Brouhaha, on the far side of the island, for a tap takeover between two of the largest craft breweries in Quebec. Similar beers were paired together, with a total of 12 pairings in 4oz taster glasses. The competitive whiskey barrel aged darks were pure nirvana! Fortunately, after a complete tasting, I was still in a good enough state for public transit to Ille de Garde in Little Italy district of Montreal. This area is the hub of craft beer of the whole island. Ille de Garde is a relative new comer, just celebrating it’s first anniversary the night before. Brew Master Olivier Dupras gave me a tour of the compact brewery and then sat me down for some tasting of food and brews. This brewery is the first I have visited that has 3 different tap dispensing temperatures matched to different styles of beer on their 24 rotating taps. The food/beer pairings were spot on and the perfect ending to a great day of beer hunting. 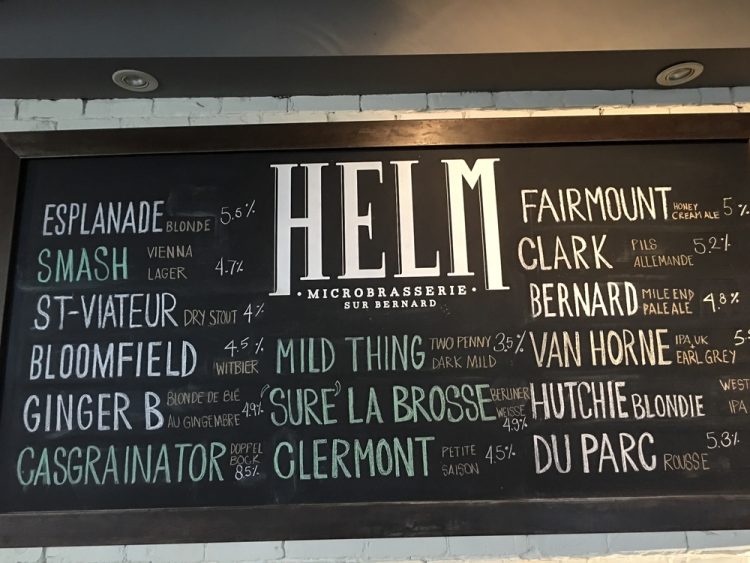 My final day started early with my first appointment at 9 am with head brewer Sebastian Cadieux at HELM Microbrasserie (Helm Micro Brewery).  HELM (which is an acronym for houblon (hops), eau (water), levure (yeast) & malt) is in a compact space with 4 fermenters and 8 conditioning tanks – serving 15 taps in its pub. Sebastian states “there is still lots of room for more brew pubs. Currently in Montreal there 30 and in all of Quebec just under 200.” I tried 3 of his beers – the flagship Bernard Pale Ale , Earl Grey IPA and a Belgian style Sour. All of them reflect the passion Sebastian shows in his enthusiasm for craft beer.

The last stop was also in Little Italy  – 12 blocks from HELM. In a very heavy downpour I made my way through the neighbourhood. Arriving, looking like a drowned rat, I was given a warm welcome by Yan and Sebastion of Vice & Versa craft beer bar. Both are beer sommeliers and take great pride in the selection of beers on tap. With 40 taps running, beers can change up to 8 times a day, meaning there is always something new to try. Four of the lines are dedicated to their own brewery, Denam. At the time of my visit the beers from Denam were Saison – dry and fruity, American pale ale, session ale – with wild yeast and a mango wise.

I asked Yan about the fast paced craft beer scene in Montreal. “In the last 2 years there has been a big jump in new breweries. Brew pubs will keep growing. In the next 3 years there will be 1 to 3 new breweries per month

Growlers? 6 months ago just laws changed in Quebec – brew pubs can sell growlers, just like BC.
Every brew pub in Montreal, and most likely all of Quebec serve poutine. It is so delicious. The fries are dark golden brown and creamy inside. At Broue Pub Brouhaha I had duck rendered gravy on top of my cheese curds – it was heavenly.

The craft beer revolution is spreading like wildfire. This is truly the golden age of beer in Quebec!