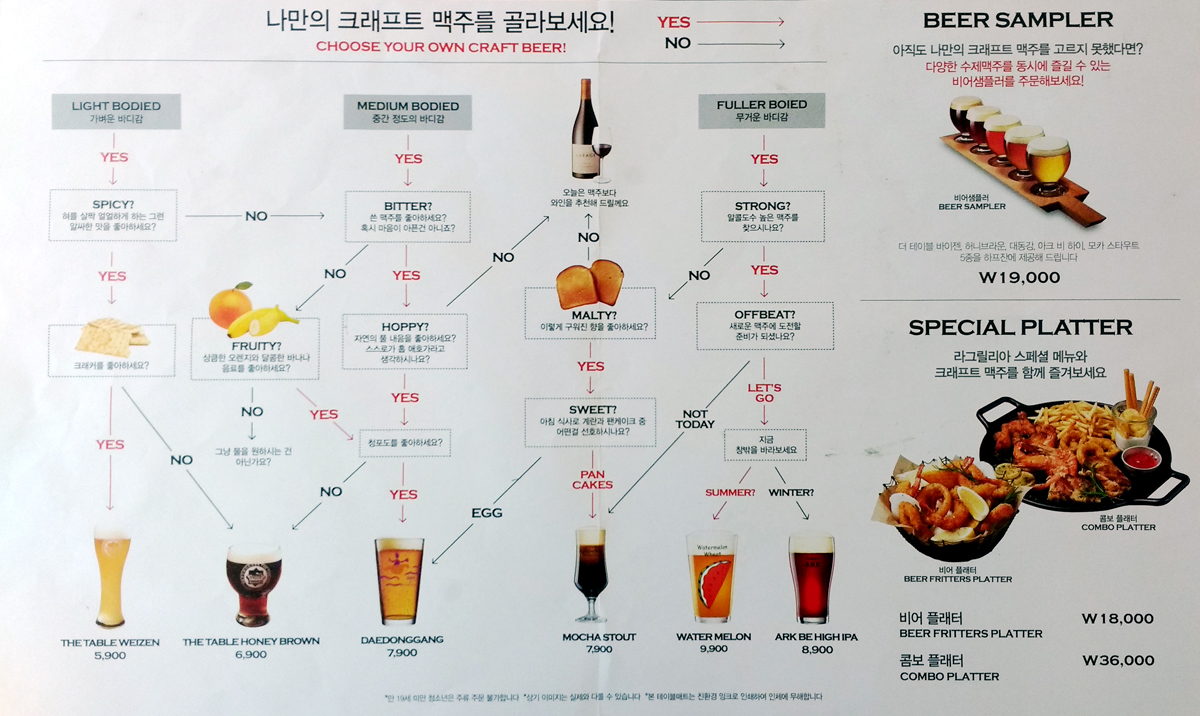 So, the Daedonggang this British-Canadian was sipping in an Italian restaurant in D-Cube City was not produced by the North Korean regime, as Google had suggested, but was in fact a Danish-Belgian collaboration brewed in Seoul. And the question would be, Alex: “what is globalization?”

In the spring of 2017, Korea was placing second-from-bottom on my list of tourism destinations, just above Syria. The president had recently been ousted for corruption. Kim Jong Un was playing with his newest missiles and Japan was running missile attack drills. China was protesting installation of a US anti-missile system that does not blow up the target, but just knocks it to pieces with a loud “THAAD” (not sure South Koreans know this). The aircraft carrier USS Vinson was moored in Pusan naval base, making a big fat target, and the US Secretary of State implied military action was under consideration. For these and other reasons, I had booked the shortest possible trip.

The day started at 05:00 with a flight to Jinju (close to Pusan), followed by a day’s work and a 3 hr train ride back to Seoul. I was still dis-oriented from 11hrs on a plane and 2hrs on a bus the previous day. When I got back to the hotel around 18:30 and showered, I had no energy for the subway downtown to find the brewpubs and beer bars I had previously scoped out on the net. I checked the net for craft beer close to the hotel. No joy. So, I headed out just to find local food.

D-Cube city is basically a residential/hotel/mall/department store complex so the options were limited, unless your idea of local food everywhere is McDonalds and Starbucks. The Hyundai Department Store possessed a food court but, strangely, no car department. However, the food options looked suspiciously Japanese, Chinese, Thai, etc., just as we would find in Canadian food court. I really wanted Korean. There were signs that appeared to indicate restaurants on the 5th floor, but I am not 100% competent in Korean, not even 0.0001% competent really, so I dragged my appetite up there in hope. Finding the restaurant area was the next challenge, but eventually I saw a sign for “Asian cuisine” pointing outside the store. I had already avoided generic “Asian”. LaGrillia next door was not appealing; not until I looked more closely at the food pictures. Was I losing my mind from jet lag and hunger? Was I just imagining a craft beer taster bat? Apparently not.

The Weizen and Honey Brown from The Table Brewpub in Seoul were very passable, if you like those styles. This Daidonggang was a Belgian Pale Ale produced, in collaboration with The Booth Brewery, at Mikkeller’s Seoul brewery. Again, not to my taste, but a good example of the type. It was a big step up to the Ark Be High IPA from Korea Craft Brewery in Eumsung. Very much a Northwest IPA with all the citrussy notes one would expect and 7% alcohol. The dessert beer was The Hand and Malt’s Mocha Stout (from Namyang-ju). Yes, I did order the combo platter. The menu seemed to be New-York Italian. I tell you, I really should learn to chill-out and rely on my nose for craft beer.

Another tiring day later, I was faced with a similar situation. At the end of the seminar at which I was presenting, the official dinner finished at 7:30. Again, I could not face heading downtown. As I rode the elevator back to my room, I glanced yet again at the advert for the lobby bar but, this time I looked closer. Those three glasses looked suspiciously like a dark, an amber and a light-coloured beer. There was also one English word on the ad “paired”. Surely not? Worth a look. Sure enough, the lobby bar of the Sheraton D-Cube was showcasing a taster bat of four craft beers (no signs of pairing with anything, but then again, the English words “original gravity” with no number or units on a bottle of Kloud lager did not mean anything either). The first taster was an excellent Czech Pilsner with a nice little hop bite to it from Jang and Craft Brewery in Sunchang. The second, from the same brewery was listed as a “Rauchbeer Bamburg Dunkel”, with a relatively subtle smokiness, thankfully not the “who put their cigarette out in my beer” style. I was not at all disappointed to find the third was Ark Be High IPA, three out of four new beers were three more than I was expecting to find in a hotel bar. The fourth was billed as a “Sweet Stout” also from Jang and Craft brewery. The description clearly stated “complete lack of residual sweetness” on one line and “the fruity creamy sweet stout” on the next. I would have to agree with two out of these three descriptions. Another great dessert beer.

I should not have been surprised to find good craft beer in Korea. I had heard Mission Springs were shipping product there in plastic kegs and they have also set up brewing operations in Seoul. I did not expect craft beer to be so much a part of Korean culture that it has made it into an “Italian” restaurant and the bar of a major hotel chain.

I would suggest waiting until the political situation is a little less fraught, but if you are thinking of going to Korea, there is some pretty decent craft beer to be found, at least in Seoul and its suburbs. For more information check out Craft Beer Asia.