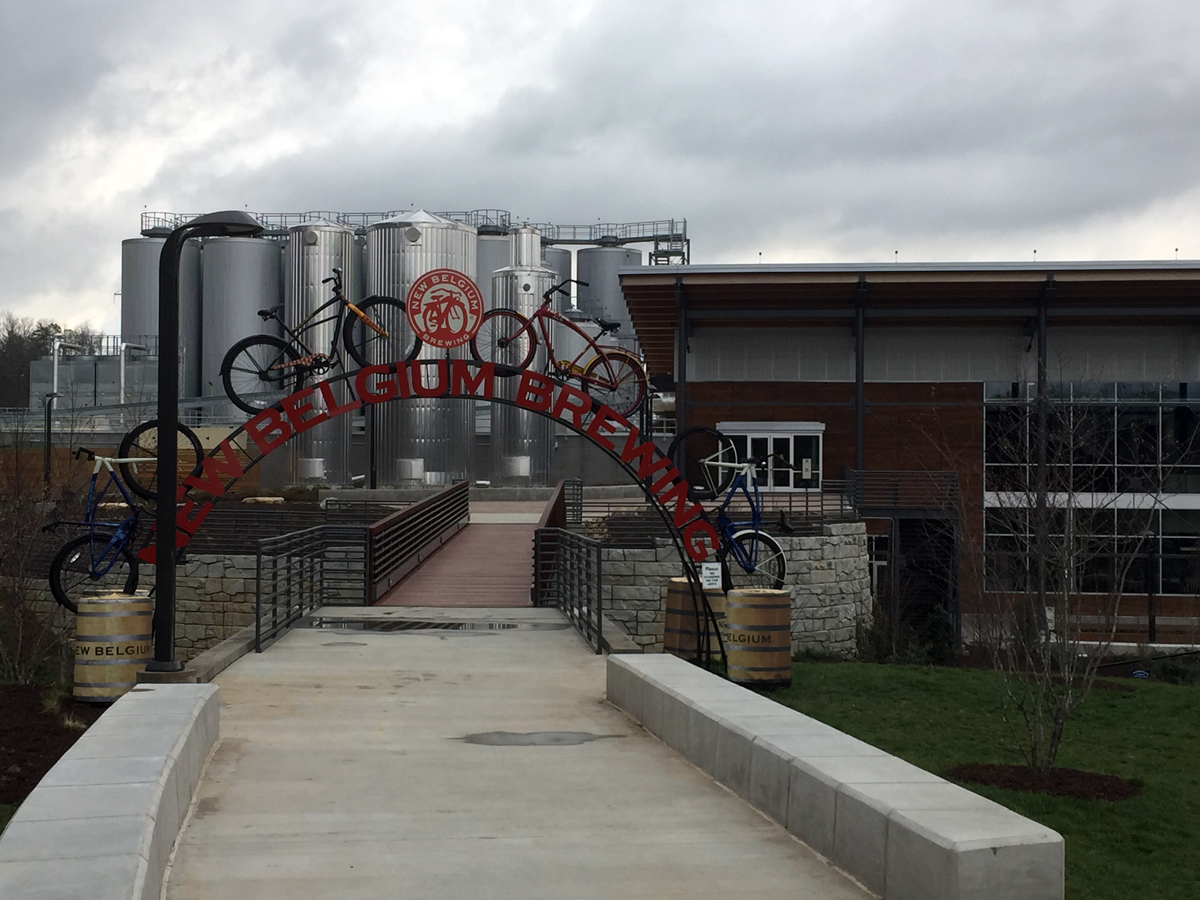 If you’re wondering why so many beer conferences are headed to North Carolina, their 200+ breweries and brewpubs may be the answer. Asheville, Charlotte and Raleigh boast the largest percentage of breweries in the state with a few outliers further east and south. And damn, son, they make some fine beers in the south.

A conference took me to Asheville (poor me) and as they have more breweries per capita than any other U.S. city, I knew I’d be well-hydrated. In addition to the 30+ breweries in this city, I fell in love with the cuisine. Fried green tomatoes, house-made jams, fried chicken, biscuits, country ham, cheesy grits, and Andouille sausage – all so good that I’ll forgive them for not having Tater Tots anywhere.

Then there’s the city and its people. We likened the town centre as what Hollywood shows as quaint, small-town USA. Independent shops and restaurants with genuinely friendly people on tree-lined, clean streets. It was lovely.

Now, back to the beer.

New Belgium is employee-owned and operated and the staff/owners are proud to disclose that they make a living wage and do not accept tips. All tips received are donated to a local charity. Open in the spring of 2016, they quickly became a local favourite with a spacious tasting room and patio on this 17.5 acre land that hosts their 200 bbl brewery.

Then there’s Sierra Nevada, which is technically in Mills River, NC near the airport. One of the criteria for picking Asheville and this particular land was that they wanted to be at least 50 miles away from the smaller craft breweries. I respect that they didn’t want to come in with their 200+ acre brewery plan and overshadow the existing breweries. Kudos.

In addition to the brewhouse, the land hosts a massive 400-seat tap room/restaurant where you can drink beers brewed on their pilot system and eat some amazing southern farm-to-table cooking. They have set a high bar for a tap room restaurant – we had lamb tartar w/quail egg, thrice-cooked duck fat fries w/duck confit, and an IPA braised pig cheek pizza. Hooah. Once sufficiently entranced in a food coma, you can take a self-guided tour of the copper-clad brewhouse and watch the open-fermented beer bubble away. Don’t forget to bring your beer for the sojourn. Take a left at the top of the stairs to browse the brewhouse, a right to go to another bar area, High Gravity, where you can play corn hole (inside), step out onto the deck and plunk yourself into a rocking chair with a beer, or head down the stairs to the impressive garden and sitting area. Everything was done so well at Sierra Nevada and is a must-visit if you’re in the area.

As for the smaller breweries, there are a good collection of them all within a short walking distance namely, Hi-Wire, Asheville Brewing, Bhramari, Wicked Weed, Twin Leaf, The Funkatorium, Catawba, Green Man and Burial. Most had well-made beers, unique tasting rooms and are a place I would gladly visit repeatedly. In fact, I did visit a couple of them twice during the week. As this would be a much lengthier article that my esteemed editor might not have room for (hi Dave!), I expand on these and a few other breweries as well as bars, bottle shops and restaurants on my blog, hopscanary.com.

If you’re planning a trip to Asheville, I’d suggest staying for three to four days. Since they have an impressive food scene, do some research and work a couple of nice meals into your agenda. Tupelo Honey and Biscuit Head should be on your list and when you’re looking for a fast burger, Farm Burger will hit the spot. Cúrate was recommended to us by multiple people but were closed for renovations during our visit. And lastly, if you fancy some pinball, visit the Asheville Pinball Museum where for $15, you can play all day. They have pinball machines from as far back as the 60’s as well as classic arcade games for you to exercise your fingers on, pinheads.

Here are more images from Asheville: