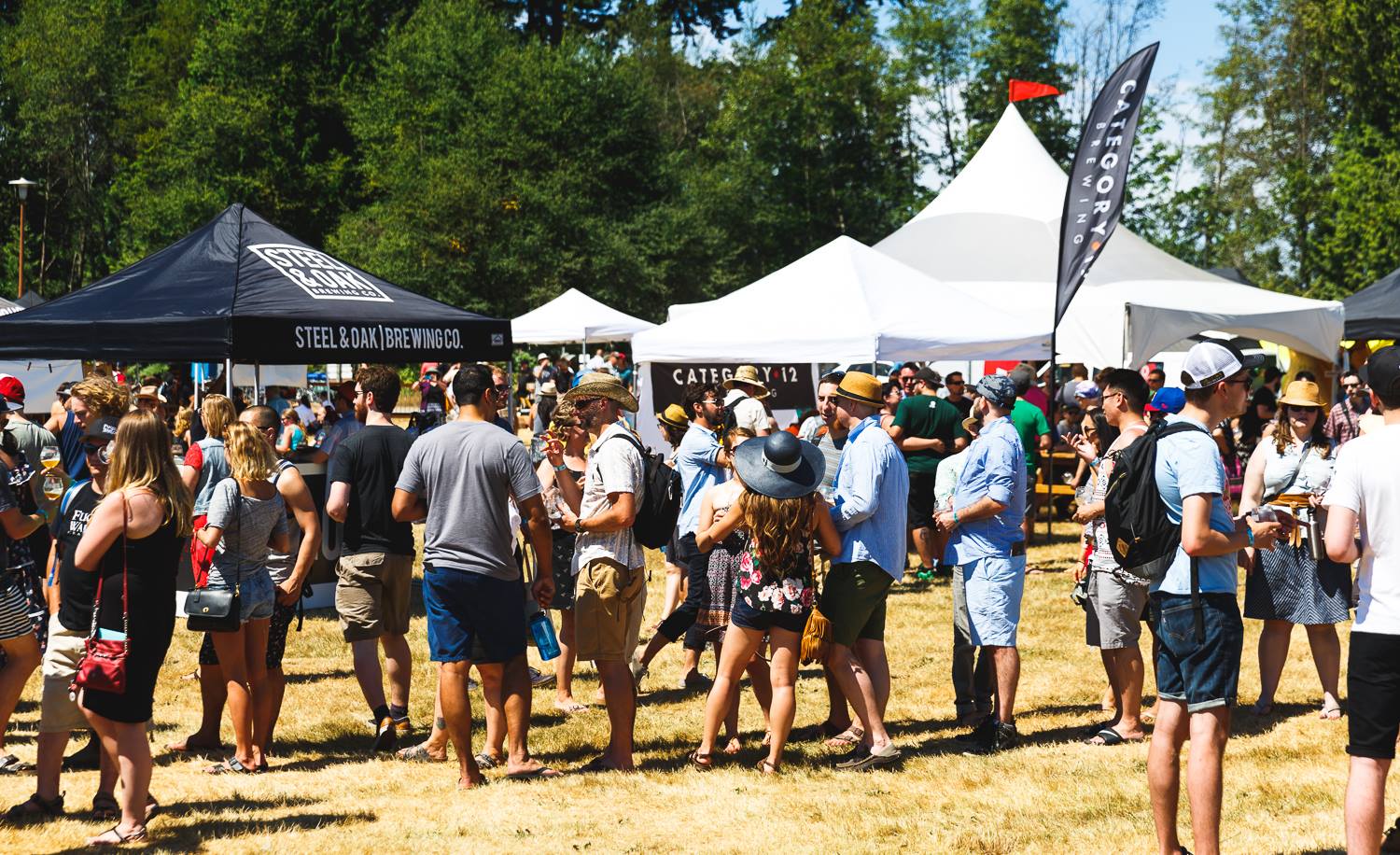 What’s Brewing has been known, in advance of selected beer festivals, to profile an especially tasty taplist review for the sip planning benefit of lucky attendees. Once again we present to you a preview of what’s pouring, this time at the upcoming 3rd annual Farmhouse Saison and Wild Ale Festival.

First, in case you weren’t already aware: Farmhouse Fest is being held this very weekend, Saturday July 8th from (depending on your ticket type) 11 AM or Noon, until 6 PM, at UBC Farm. If you’d like to go but you aren’t already a ticket holder, you’ve got some problem-solving to do because the event sold out a couple of weeks in advance.

What makes that impressive is that attendance capacity has been increased each year since the inaugural event in 2015. Last year the Festival sold 900 tickets; this year they’ve upped the limit to 1200 patrons. Note that those numbers don’t represent full demand. Event organizer Jonathan Evans intimates that “The field could easily support 2000 people, but we’ve intentionally kept things lower so everyone has more room to enjoy the beers and the venue”.

That is completely in keeping with the ethic around Farmhouse Fest, which began when a handful of Vancouver-area beer geeks got together with a common interest: to create a festival placing a higher priority on beer category focus and taplist curation than just “good times drinkin’ beer”. In other words, a thinking beer nerd’s beer festival. So it behooves you to do some of your own thinking on your way to the Festival. Before we get to that tap list, here’s a bit more about the event.

Learn something before you just show up and drink

Farmhouse Fest is unique amongst annual BC beer festivals in that it is a laser-ish focus on beers falling into categories adjacent to “farmhouse ales”, including Saison and Bière de Garde. These styles earned their French-sounding names the honest way, by evolving in and around Wallonia, the French-speaking southern side of Belgium. Farmers in the region historically fermented these bevvies as a way of providing refreshment to their summer workers, some of whom were seasonal (“saisonniers”).

Saison is undoubtedly the most popular style in the Farmhouse category. For more on this easy-drinking, thirst-quenching style, see our Summer 2017 Tasting Panel feature, Saison vs. Saison: Warm Weather Beers Part II.

Keeping with the theme, the festival’s venue is a century-old agricultural base on UBC’s Point Grey campus that plays home to the University’s Centre for Sustainable Food Systems program. (Planning note: if you like beer festivals on farms, don’t miss BC Hop Fest on September 30th, next to BC Hop Co’s facility. That festival also qualifies as possessing a focused theme, and you’ll typically find numerous seasonal “wet hopped” ales there. Also, you can celebrate Persephone’s 4th annual Tough Kegger charity race with beers on their “beer farm” in Gibsons on August 19th.)

Mind you, Belgium and northern France have given a lot more than Farmhouse to the world of beer; this area of the world is regarded by many as home to the highest density of unique traditional beer styles anywhere, featuring complex and remarkable ales that have inspired brewers worldwide. Similarly, Farmhouse Fest is inclusive of some other ales that pay homage to distinctive methods created in the Low Countries.

For instance, the inclusion of “Wild Ale” in the event’s title signifies that the use of yeast in some included beers follows wild and/or spontaneous fermentation practices that had become all but extinct when Big Beer had its stranglehold in the latter 20th century. The Festival notes that it’s the home of “the funky, the fruity, the peppery, the estery, the tart, the dry, and the sour”, and almost all of that has to do with our little friend, yeast. Belgian brewers are as famous for focusing on yeast as Pacific Northwest breweries are for fixating on hops.

As you may know, sour beers exploded in popularity around here two or three years ago, and “went mainstream” by 2015. It follows that this was a big reason for the success of Farmhouse Fest out of the gate in its first year, and sours certainly are still a key ingredient on the menu. The word “sour” appears 50 times on the Festival’s home page and beer listing.

Anything else this year?

Jonathan Evans told us that there will be approximately 60 breweries and cieries represented on the grounds via 40 booths (as opposed to 27 in 2016), along with a couple of “tap trailers”.

New this year is an early entry option; 300 people have tickets to get the party started at 11 AM. General Admission gates open at 12 noon. For those attending, Jonathan also notes that Van Django will be playing jazz music all afternoon. There will be 5 food trucks on site, and they’ll have non-alcoholic beverages from Mixers & Elixirs and Callister Brewing (their sodas).

Aside from beers, Farmhouse Fest ’17 also shines a brighter-then-ever spotlight on ciders. The intruiging cider taplist brings additional refreshment to the event, while still keeping things interesting and challenging.

OK, with all that reading and thinking out of the way, you are certified to slake that thirst on Saturday with the amazing drink list on offer. Here are a few highlights. Full list of ~180 taps is here:
http://www.farmhousefest.com/2017/#beers

Many of the beverages being poured at FF are brought to BC by the fine folks at our local craft beverage importers, including Beerthirst, UnTapped, Copper & Theory, Westbier and Txotx Imports (ciders). Here is some of what they’ve brought to town for you.

AGAINST THE GRAIN BREWERY (Louisville, KY)

Here is just a taste of what the BC breweries are bringing.

Remember, the above is just our starter shortlist. The crazy, full list of ~180 taps is here:
http://www.farmhousefest.com/2017/#beers