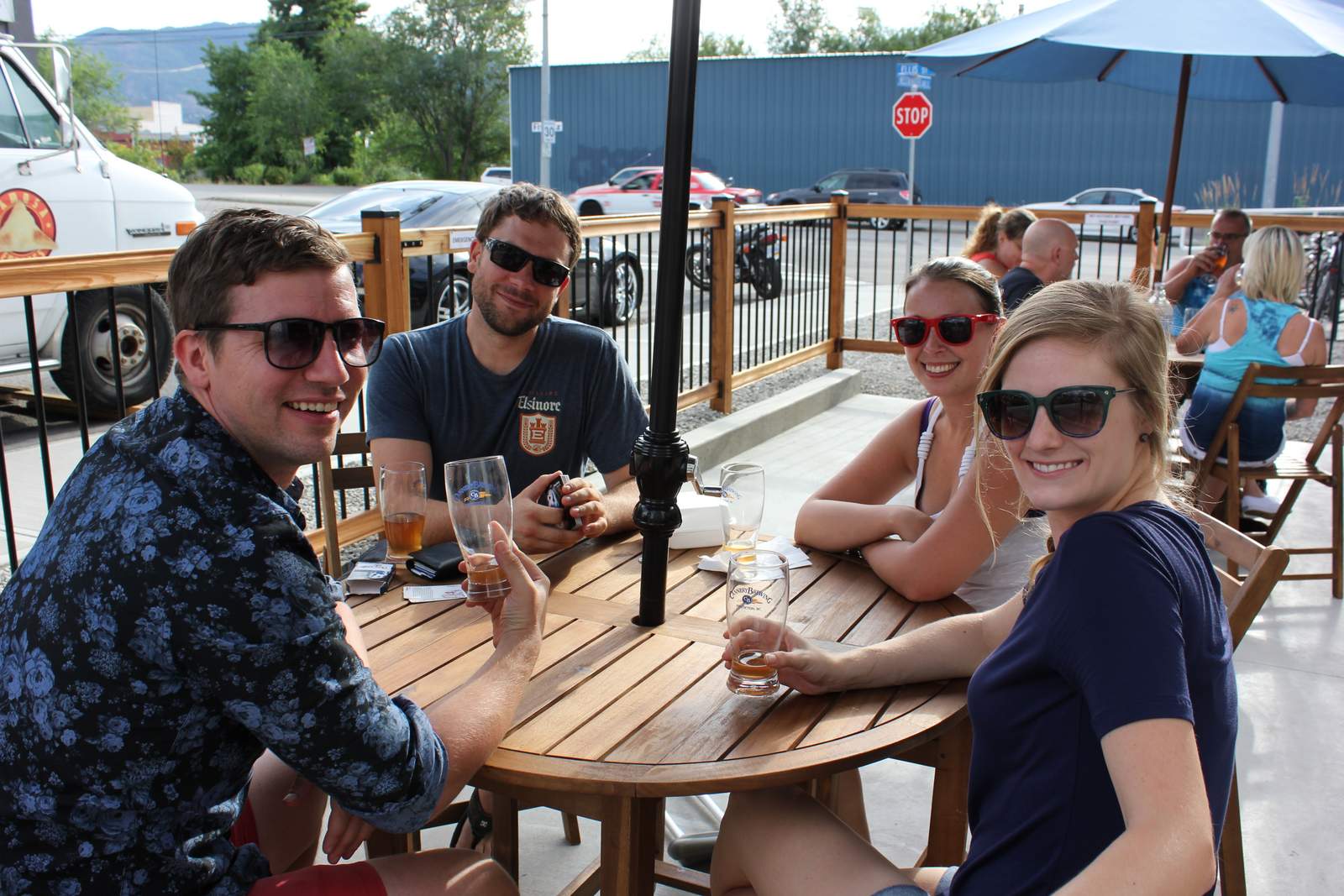 While the calendar says it is spring, it already feels like summer here in the Okanagan. Patios are open, gardens are blooming and people are out exploring the region by foot, bike and boat.

I’ve lived in the Okanagan for 10 years, and this is my favourite time of year. As we head into the hot days of summer, there is absolutely nothing like sipping on a craft beer while soaking up the Okanagan sunshine. Our population swells as folks flock here for a BC staycation to discover the beauty of this region.

People regularly ask me where to go to discover our local craft beer scene.  It seems like each month there are more and more options. Whether you are coming for a weekend or a week, there are loads of great choices.

Penticton, the largest city in the South Okanagan, is nestled between two lakes.  If you are based in Penticton, you can explore the craft beer scene by foot, by bike or by shuttle. From Okanagan Lake, it’s an easy walk to “Drink in Downtown”. From the beach you can walk up Martin Street to Bad Tattoo Brewing where they feature an amazing selection of wood-fired pizzas and handcrafted beers. Just a bit further up is Old Order Distilling, a craft distillery of gin, vodka and whisky. Also within easy walking distance is Cannery Brewing on Ellis Street. The new taproom, patio and brewery is open daily. Check out the events calendar on their website for a listing of music nights and special events. Across the street is Mile Zero Wine Bar and many enjoy a stop at both locations.

While on Ellis Street, check out Hoodoo Adventures. You can rent a bike for a self-guided tour or sign-up for their Spirited Brews Cruise or Bikes and Beers tour. If you want a little less physical exertion, Grape Friends offers a Beer Buddies Tour, which is a guided tour of breweries and distilleries.

Also in Downtown Penticton is the wildly popular Penticton Farmers’ Market every Saturday, featuring a rotating selection of local and regional breweries, distilleries, cideries and wineries where you can sample and purchase beverages to go.

For other craft beer options in Penticton, be sure to visit Tin Whistle Brewing which has moved to their new location in the Cannery Trade Centre, and the new Highway 97 Brewery, which is scheduled to open this July.  The Kettle Valley Station Pub at the Penticton Ramada features a great selection of craft beer, four rotating taps and a monthly cask night. Plus Barley Mill Brew Pub, which brews their own beer in-house.

We’re also eagerly awaiting the early June opening of Craft Corner Kitchen which will feature taps from BC breweries and farm-to-table sharable plates served at their communal table.

From Penticton, head south to Oliver and the Firehall Brewery. They just concluded a successful crowdfunding program and plan to open their Beer Shop & Social on the lower level beside their brewery in early June. Plus the Back Alley Concert series is back again, beginning on June 11th.  While you’re there, also check out Pappa’s Firehall Bistro located directly above Firehall Brewery for a meal and more craft beer.

Heading north from Penticton? Stop at Local Lounge & Grille in Summerland for a meal on their lakefront patio paired with a local craft beer. I would need another whole column to cover off all the great craft beer stuff happening in Kelowna, but be sure to head downtown and do the Grapes & Grains Trail where you can walk to some great breweries, cideries, wineries and distilleries. Visit Tree Brewing, the Tree Brewing Beer Institute, BNA Brewing, BC Tree Fruits Cider, Sandhill Urban Winery, Urban Distilleries and Okanagan Spirits. Plus, keep your eyes open for the grand opening of Kelowna’s newest brewery, Kettle River Brewing in early June.

Many of the businesses I referenced in the South Okanagan have a CAMRA member discount or offer, so check out www.camraso.ca as you plan your Okanagan craft-beer staycation. Until next time, cheers.