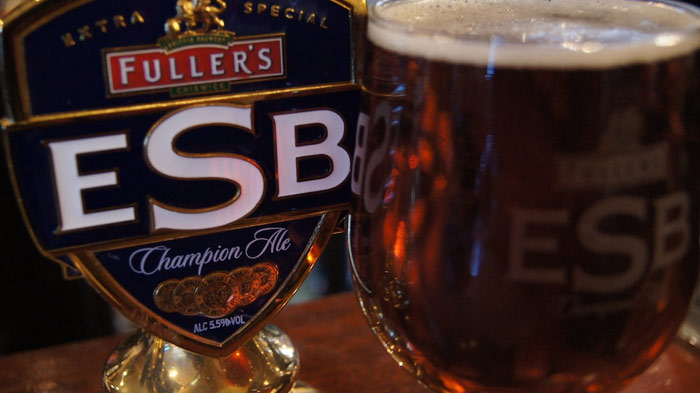 With a few exceptions, notably Baldwin and Cooper’s Best Bitter from Howe Sound, the BC craft brewing industry was reluctant to use the word bitter for about the first 20 years of its history.  Many of the pale ales produced by the industry during that period would have passed muster as a bitter in the UK, but the marketers clearly felt that use of the B word would put people off.  I do recall that in the early 2000s a few outlets, Subeez comes to mind, sold Crannog’s Beyond the Pale Ale as Crannog Bitter.  Bitter is considered to be a variant of pale ale, and the terms are used virtually interchangeably in the UK.  The key thing to remember is that bitter is not really all that bitter.  It was termed bitter to distinguish it from ale way back when hops were first introduced into the UK.

More recently, we have seen an increasing number of breweries bringing out an ESB (an abbreviation for Extra Special Bitter).  The marketers seem to have been a lot more comfortable using that term. It’s not a bitter, it’s just a B. However, most of these have been more influenced in styling by US ESBs than by the original: Fuller’s ESB.

I think I can speak reasonably authoritatively about Fuller’s beers.  I lived for two years in Acton, one stop from Chiswick on the District line; then two years in Ealing, four stops away; then four years in Isleworth, a short paddle past Brentwood up the Thames.  All these London suburbs were firmly within Fuller’s territory. OK, there was a short break of two years in Earlsfield drinking Young’s beers at pubs with delivery by horse-drawn dray (sigh), but Fuller’s Hock (a mild), Chiswick Bitter, London Pride and ESB were my staples for the first ten years of my legal drinking life.  Fuller’s Hock turned me on to mild in the late 70s. I hope our readers all got the chance to try some locally-brewed mild ales during “Mild May” this Spring. But I digress.

Fuller’s Chiswick Bitter (3.5% ABV in cask or bottle) is a classic “ordinary bitter” and that is how I remember ordering it.  There is no equivalent brewed in BC, but Real Cask Brewing’s Blackburn Best Bitter is the closest thing you will find, being at the lower end of the alcohol scale for a Best Bitter.  Brewer Adam Chatburn might disagree, because I know he was aiming for more of a Northern British style.  London Pride (4.1% ABV in cask 4.7% ABV in bottle) is Fuller’s best bitter; the closest local equivalent would be Baldwin and Cooper’s, though again a little higher in alcohol.  Fuller’s ESB (5.5% ABV in cask, 5.9% ABV in bottle) sadly has no local equivalent, but I would be interested to hear from any brewer targeting that flavour profile.

When it comes to the term ESB, the Beer Judge Certification Program says it best:

“In England today, “ESB” is a Fullers trademark, and no one thinks of it as a generic class of beer. It is a unique (but very well-known) beer that has a very strong, complex malt profile not found in other examples, often leading judges to overly penalize traditional English strong bitters. In America, ESB has been co-opted to describe a malty, bitter, reddish, standard-strength (for the US) British-type ale, and is a popular craft beer style. This may cause some judges to think of US brewpub ESBs as representative of this style.” http://www.bjcp.org/docs/2015_Guidelines_Beer.pdf

To my mind, the key to a great bitter in any of the above categories is balance, and here Adam and I do agree.  Being from the North of England, he would err on the side of bitterness. Some would say hoppiness, but what we now think of as hoppiness is more about the aroma than the bitter flavour. Being from the south of England, I would err on the side of maltiness.  Some would say sweetness but the tastebuds can be fooled into sensing sweet in a maltier beer.  One of the key contributors to the maltiness in Fuller’s beers is their yeast.  Because I am horribly sensitive to diacetyl, I am pretty sure it is not that, though it may be present at very low levels; however, some metabolic byproduct of Fuller’s yeast contributes to malty flavours. For homebrewers, Wyeast 1968 or White Labs WLP 013 both do the job nicely.  Balance means, when you sip the beer, you do not get the impression of yeast, hops, malt or any of the adjuncts that may have been added, they all blend into a harmonious whole and you just think “that is a nice bitter”.

For many years, my favourite bitter available in Vancouver was Propellor ESB from Halifax. It seems to be no longer available via the BC Liquor stores (I suspect the 13 bottles left in Quesnel and Kamloops are old stock).  That is a balanced beer, though with a tendency towards excessive toffee notes on occasion. The BC ESBs are either a bit too bitter (R&B’s East Side Bitter), too hoppy (Red Racer ESB) or too heavy on the crystal malt (Bomber’s ESB) for my persnickety taste buds.  Yes, I am a fussy bugger, but when I challenge the industry to better things, they always rise to it.

To the BC industry: please try backing off on the bittering hops. No need to use British hops.  I have been very surprised to learn that a very acceptable English-style ESB can be made with Pacific Northwest hops, just not the most citrusy ones. Nugget seems to work well. Willamette is a derivative of the Fuggle. Back off on the crystal 80 and switch to crystal 60 or use smaller amounts of more highly roasted malts or roast barley.  You will get a cleaner flavour rather than the sickly caramel/phenolic maltiness of crystal.  Better yet, Carafa II, if you can get it, gives a stunning clean malt profile with none of the phenolic astringency of crystal 80 or some chocolate malts. That is because phenolic flavours are derived from breaking down the lignin in the malt husk during the long, wet heating for caramelization and the subsequent kilning that crystal malt is exposed to. Carafa II is dehusked early in the process.  I learned about Carafa II at Vanbrewers, and have never looked back.

Do try one of the yeasts derived from the original Fuller’s strain. It makes a huge difference, as I also learned at Vanbrewers tasting Dan’s homebrew made with five different yeasts.   I have noticed some gradual evolution in the BC ESBs over the last few years, so perhaps there is still hope for a local equivalent to Propellor ESB.

As a last note, since this is the Staycation edition: if a driving tour of BC is beyond your budget or time availability this year, you can always buy ESBs from a range of BC breweries and have a flavacation in your own home.