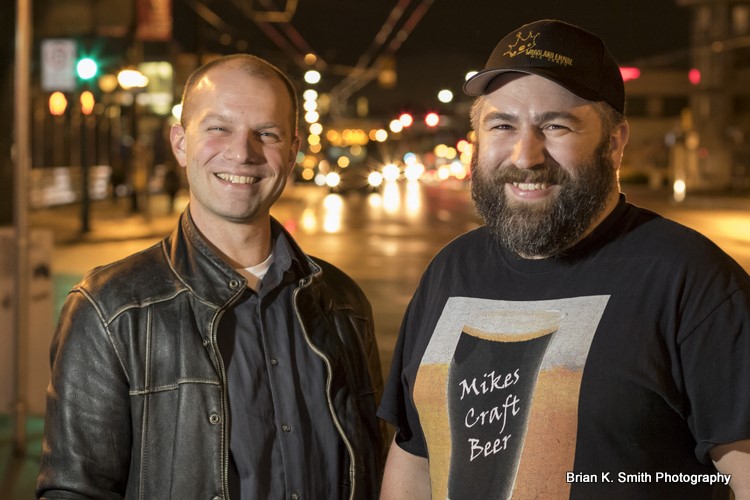 For over 20 years, since Grade 2, the guys have known each other; as little boys growing up in Surrey, they melted plastic army men on the back porch together. Now they have a grown-up hobby. Mike Garson and Steve Hoffmann are known in BC craft circles as Mike’s Craft Beer, one of the top 3 beer blogs in craft-crazy British Columbia by most any reckoning. Mike, the face of the brand, is the primary contributor, and his long-time pal Steve helps out as well. Let’s dial the clock back and find out how this all began.

Unlike today’s millennials, Mike and Steve didn’t grow up with the craft wave. The boys weren’t really into micro beer during college, for instance. In the years shortly after that, Mike held a couple of keg parties, and for these soirees he happened to source the needed cylinder from a new Surrey brewery. Central City opened its doors at the beginning of the 2000s, and their aptly-named Springboard Lager was the keg of choice, more because of location than for stylistic considerations. Still, the fact that he was supporting this local brewery was a talking point at these parties.

Other than Central City, and the occasional Dead Frog, Mike’s craft repertoire was fairly limited in these early drinking years. The man who now has 5 years of Woolly Bugger aging in the cellar was still primarily buying macro.

Steve was a couple of steps ahead of Mike at this point. One night at a family party, he was offered a Guinness and found that he had a taste for it. Next thing you know, Steve was getting into big ales and stouts, and starting to discover the beer scene.

Steve now knows how fortunate he was to get into craft a bit earlier than some other folks. He was able to witness firsthand the legendary scene at Dix, the cradle of Vancouver’s current beer movement. Steve attended some cask nights there, and at least one Caskival.

They say you always remember your first, and in the case of Mike, the memory is clear. The day Steve turned Mike on to Phillips Longboat Double Chocolate Porter was a turning point. For Steve, a key factor in falling in love with beers like this was that they didn’t taste like ‘beer’, something Mike was now learning about for himself.

Mike had followed behind more slowly, but when he got serious things really took off. Like many, his starting point for sharing about beers was Facebook, where he started to log things he was trying. At that point, Mike shifted into the ‘don’t drink the same beer twice in a row’ mode that is the hallmark of the craft enthusiast, and started to more assiduously keep track of what he was drinking in FB, using it as a kind of makeshift Untappd.

Mike says about Steve: “He was my catalyst into craft beer, basically. When I told him what I was doing [starting to share and blog about beer] he was jacked to join in.” Before long, they had outgrown Facebook as a platform and were ready to set up a website.

Birth of a Blog

Mike started up a WordPress blog and learned on the fly. It got picked up by the local beer community. He started to meet people at events  too. Wearing the shirt helped.

“The Shirt?” Right, the thing he’s wearing in these photos. I didn’t ask, but I don’t think he has a closet full of those. It’s getting a bit worn out from numerous washings, so in a few years I think he’ll have to retire it. In the meantime, I can vouch for the utility of The Shirt. The beard and ever-present ball cap are pretty good identifiers, except in a beer fest crowded with bearded guys in ball caps. Thanks to that shirt, I don’t have to worry that I’m approaching the wrong guy.

Who designed the logo? One guess. I’m pretty confident it hasn’t won any design awards, but I can vouch for its utility. It’s a beer, with Mike’s name on it. It works.

Come to think of it, maybe the logo says more than that. For starters, that’s a pretty dark beer. It could be a double chocolate porter, or maybe it’s Woolly Bugger. Hey, you practically didn’t have to read this story to learn anything about Mike; it’s all right there on his shirt. Kind of like he’s wearing his heart on his sleeve, but without sleeves.

Thanks to branding, along with consistent posting, Mike made the transition from closet beer-lover to craft community figure.

Being a dedicated beer blogger isn’t as much fun as it sounds. It means constantly losing sleep just to get that next bottle review posted. Take a look at the site; the content is not slowing down. The day I checked, there were 10 posts in the past week, including 4 days that he had posted twice! That’s not easy folks. Each beer review generally means opening a 650 ml bomber, taking a photo, doing some research, and being inspired to write something. Not to mention that in those ten posts were beers weighing in at 10%, 8.5%, 9%, 9.5% and a few more above or around 7% ABV. Try doing this for 5 years and not slowing down. In fact, he might be speeding up.

But there are perks along with the work. Beer brewers and vendors are aware of the power of social media, and they regularly send product to folks like Mike for public sampling. They know they stand a pretty good chance of getting a decent review, given that what they’re sending is craft beer (a “Mike’s Macro Crap Beer” review site has yet to debut). So the symbiotic relationship between commercial purveyors of crafted things  and critics of those artisanal creations thrives. As a result, Mike gets free beer. Is that a fair trade-off for losing sleep? You decide.

He reviews more than beer. You’ll find some interesting beer-related contraptions getting the “open box” treatment a la the finest YouTube tech blogs. Learn about a tap system connected to an insulated metal growler manufactured in China. Read about a CO2 growler cap system. See Mike try out a fancy Black & Tan spoon replacement. It’s all in his Gadgets category.

It’s not just staying up after dinner fooling with the website either. Mike gets around. One of his more popular features: his “Construction Updates” series, in which Mike visits locations around BC that aren’t even open yet, and reports on progress. Plus, he gets out to plenty of places that are open, including a recent visit to Nanaimo’s White Sails.

For a hobby blogger to put in that kind of mileage would generally be prohibitive. Mike’s secret advantage is that his day job takes him around BC, and he has a hand in managing scheduling. Makes those out-of-town brewery visits easier if work is helpfully sending you where the beer is.

The man is known outside the province too. During a recent trip to Winnipeg, I happened to stop in at local brewery Half Pints, and when the subject of Vancouver came up, the person manning the tasting room dropped Mike’s name. I learned about Mike’s secret connection: a truck driver that facilitates beer swapping between the Prairies and the coast. So you could say Mike’s reputation gets around. As if to cement Mike’s celebrity status, CAMRA Vancouver recently featured him in their Community Spotlight of the month for March 2016 (the nerve; he’s all ours).

Mike gets the attention, but Steve is still there plugging away too, on a part-time basis. Together, the two have developed great consistency and are delivering useful beer information on a regular basis.

Steve’s next personal challenge is homebrewing. He’s already a Cicerone Certified Beer Server, so he’s studied beer at that level, but now he’s starting to get his hands dirty actually making the stuff. Posts in early 2016 document how he’s dragged Mike along with him in this pursuit.

As for the blog, new features include a directory map of all BC breweries, and a Donations page. There is a small amount of advertising, but Mike admits he’s not a marketer, so he’s trying out voluntary donations as a way to help subsidize the service. Mike likes the fact that people sometimes use the blog as a way to choose beers; maybe some of the many beneficiaries will toss in an extra couple of bucks as a thank you.

Of course, the satisfaction comes from within. Asked what he likes about contributing to the blog, Steve points out “the feedback from website visitors. We have a regular audience, responding about the beers.”

They’ve come a long way as beer enthusiasts. But some things don’t change. Asked about his favourite beer styles, Steve says “the dark beers will always be home.” Based on Mike’s t-shirt logo I’d say that goes for both of them.