I honestly can’t remember when or where I first met Claire. But I do know that anytime I was looking for a woman to help me out with a Women and Beer event, Claire was always the first to offer her time, her services or her beer! If someone is looking for a mentor or a role model for women in the beer industry: she is it. A head brewer by the age of 26, and now owner/brewmaster of Dogwood Brewing, she has been brewing constantly with other female brewers in the province over the last two years. She is a proud member of the Pink Boots Society, (a group that supports and promotes women in the beer profession-or wanting to get there) and wears her pink boots proudly! She even had them on underneath her beautiful flowing wedding dress! Now that’s pride! 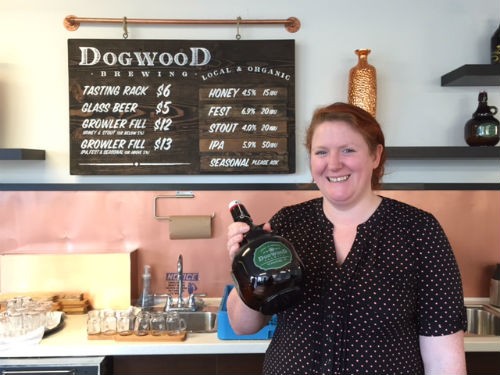 HOW LONG HAVE YOU BEEN WITHOUT A BREWERY? AND PLANNING?

I started planning the brewery in July 2012. Over the past few years I have been dedicating my time to planning and building our Brewery. I have done some brewing with fellow Pink Boots Society members Rebecca Kneen from Crannog, Kala Hadfield and some great females from the industry at Spinnakers.

WHAT BROUGHT YOU INTO THE BREWING INDUSTRY?

I took a direct a direct route right out of high school, went right into an honours Degree in Brewing and Distilling at Herriot Watt University in Edinburgh. The only internationally recognized and professionally accredited Brewing degree in the UK at the time. Students were head hunted out of the course by international brewing companies.

Yes, first impressions can be tricky people make assumption about who they think you are, once people realize I am the Brewmaster, and that I know what I am talking about, things go smoothly.

WHAT BROUGHT YOU TO THIS SPECIFIC CHOICE? DID YOU CHOOSE? OR DID THE JOB?

I’ve always found operations to be the most interesting and exciting part of working for a brewery. I chose brewing after time spent in distilleries, where there were far fewer opportunities for women in operational and managerial roles.

WHAT WERE YOU DOING BEFORE YOUR ROLE AT DOGWOOD?

I have worked as a Brewer and Head brewer for 14 years, brewing excellent beer and running breweries. I have worked for a few small microbreweries and also a huge international brewing company in both the UK and Ireland.

My stay in BC was supposed to be a fun break from my career for a year, but when I saw the rapid changes going on in the beer industry by the customer-driven love for craft beer I knew it was somewhere I wanted to stay for a bit longer. Under a skilled workers visa I took a few jobs trying to find a good fit for me, including RJ Spagnols and Brewmaster for Big River Brewpub, Richmond, before taking the leap of opening our own Brewery.

I realized that I have loved beer for most of my life, right from a young age. My first recollection of drinking my own beer was at 10 years old when my parents ordered me a small Guinness with my fresh oysters! My family moved to Munich, Germany – the beer capital of the world at that time, so when I started drinking beer it was undoubtedly of the best quality in the world. 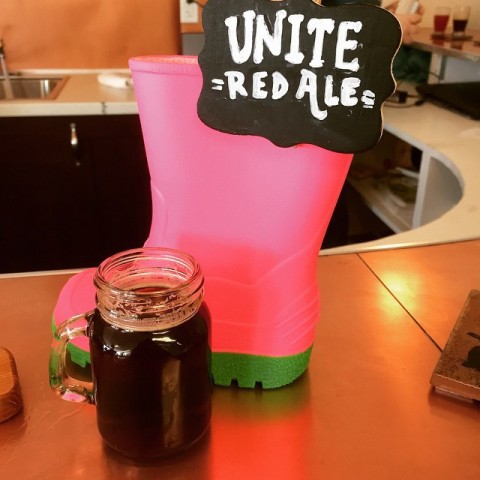 More marriage proposals, I have been proposed to by beer-loving men on a regular basis (really-who doesn’t want to be with a brewer?) From a marketing and branding side there are a number of advantages. I wouldn’t say competition is the right word, but most female brewers are known because there are so few; I am sure that will change. I think being a female brewer gives you a different approach to beer – even science says females are better tasters.

ARE THERE DISAVANTAGES OF BEING A WOMAN IN THE INDUSTRY?

It’s hard to break in/get into the industry. People may assume that you can’t handle the physical labour of the job. You need to work harder and show you willingness to get the job done to earn respect from you peers.

I love making beer. I love the quiet of the morning in the brewery when you’re the first in, getting everything set up for the day. I love to teach people how to brew, share my knowledge and experience. The best thing about working in a brewery is people have more of a sense of humour, because at the end of the day you can have a beer and talk things out. I also love introducing people to beer, finding that one beer that converts the “I don’t like beer” drinker to a craft beer lover.

Extensively, I have worked with and for some amazing Brewers who have shared with me their knowledge and experience. I feel like I am always learning. I did my degree in Brewing and Distilling and my Professional exams. The fast-track management program I did with Scottish and Newcastle provided me with highest industry standard of training. Currently I am immersed in the organic certification with the help of Brain and Rebecca at Crannog. I am learning more every day.

WHAT IS YOUR FAVOURITE BEER OF YOUR BREWERY AND WHY?

The four beers we are launching with are all my favourites and in my option the best tasting versions of their styles. All are delicious and sessionable. Dogwood’s IPA is a well-balanced IPA, less perceived bitterness because of the body, and sessional with lots of hop aroma. 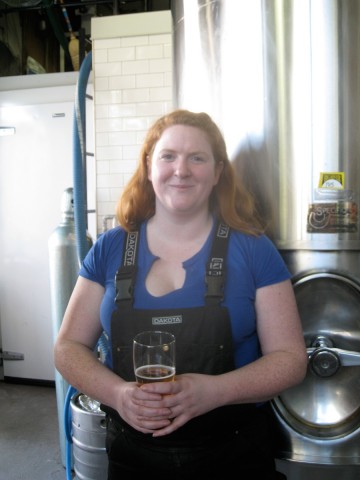 I can never answer this question, Rodenback Grand Cru is in my opinion one of the best beers in the world and Schneider Weiss is always at the top of my list but it is impossible for me to pick one favourite of all the fantastic beer in the world, which I have been privileged to taste.

Rebecca Kneen from Crannog Ales is such a great inspiration. Rebecca does not compromise her principals. Crannog’s resPect for nature and sustainability are an example to us all. My decision to make Dogwood Brewing certified Organic was influenced by the friendship of Brian and Rebecca.

I have set myself variously goals throughout my career and take great pride in achieving them. Like becoming head brewer before I was 30. My newest achievement is starting my own Brewery.

Becoming head brewer by the age of 26 was difficult but a deserved recognition for my training and experience.

AND YOUR NEW BREWERY? DOGWOOD BREWING?

As Vancouver’s only and BC’s third Organic Brewery, we are putting our ideals and love of our province into our business. By emphasizing Organic and local and striving to be as sustainable as

possible we are delivering full-flavoured Organic beer in cans, kegs, casks and of course growlers from our tasting room.

YOU HAVE OFFICIALLY OPENED UP YOUR BREWERY- ANY OBSTACLES /ADVANTAGES YOU FOUND AS A WOMAN?

I wouldn’t say that there are any obstacles directly related to being a female brewer. If anything I would say there are advantages and growing opportunities for women in beer. This is definitely something I have watched improve since I started my career 13 years ago (I can’t say managing a team of men older than me was the easiest job I took on), but I don’t think that these advancements are only seen in the beer industry. I think it’s safe to say that all women in any industry are seeing improvements in higher-level jobs as far as respect and how their employers value them. I don’t think of myself as better than any female or even male brewer out there. I believe what makes good beer is your ability to recognize your market and give the customer something they don’t have access to yet. But if I did have to pick one advantage, I would say it’s having the opportunity to create a community of women in beer throughout Vancouver and BC. Empowering and enabling women is very important to me and I want to continue to build upon that.

ANYTHING CREATED IN YOUR BREWERY WITH A WOMAN’S POINT OF VIEW? OR FOR FEMALE CONSUMERS?

I think it’s pretty clear that our packaging and branding was designed with a female’s eye – who said flowers were girly anyway? It’s delicate, informative and unique from the rest. The same goes for our beers. Not only are we organic and local centric, we do have a clear feminine presence throughout many aspects of our brand and I think most brewers see this. But I don’t want recognized for “girly beer”. We have beers that prove organic can be great, accessible, and environmentally-conscience. That is what I want people to notice first about Dogwood Brewing, the female presence can come after.

ANY PLANS OR WAYS THAT YOU ARE HOPING TO SUPPORT WOMEN IN THE INDUSTRY WITH YOUR OWN BREWERY?

Of course, we will host the International Women’s Collaboration Brew each year. I have met some amazing women in the industry since being in Canada and really want to embrace and carry on this event with these ladies and others to follow. We are always throwing ideas around as to how we can build this community. There are some good event ideas we have come up with, however no set date. So you are just going to have to wait and see!

Started in England in 2014, IWCBD event was designed to encourage women brewers (referred to as Brewster’s) and women in the industry to brew together socially on International Women’s Day, March 8th, each year. It also helps in raising awareness of women in the industry and the profile of beer.

Women around the world were given a basic recipe to follow using universally-available products and with the option of adding local items. Profits of the beer and events around it are donated to the Pink Boots Society

In 2014, 0ver 60 breweries around the world partook and many BC women in the industry gathered together to brew at Spinnakers Brewpub with Kala Hadfield at the helm. The beer of choice that year was a 4%“United Pale Session Ale. Last year the ladies all gathered at the as-yet unopened Dogwood Brewing , this time with Claire Wilson in charge. The beer brewed was a ”United Red Ale” with beer only available at the Dogwood taproom. This year’s suggested style is a gose, a top-fermented beer that originated in Goslar, Germany. It is brewed with at least 50% of the grain bill being malted wheat. Each team will brew their own variation of the collaboration recipe, adjusted for local ingredients and sale-ability needs. The beer, when ready, will be available on tap at the Dogwood taproom with hopes of having kegs, and maybe cans available for the retail market.