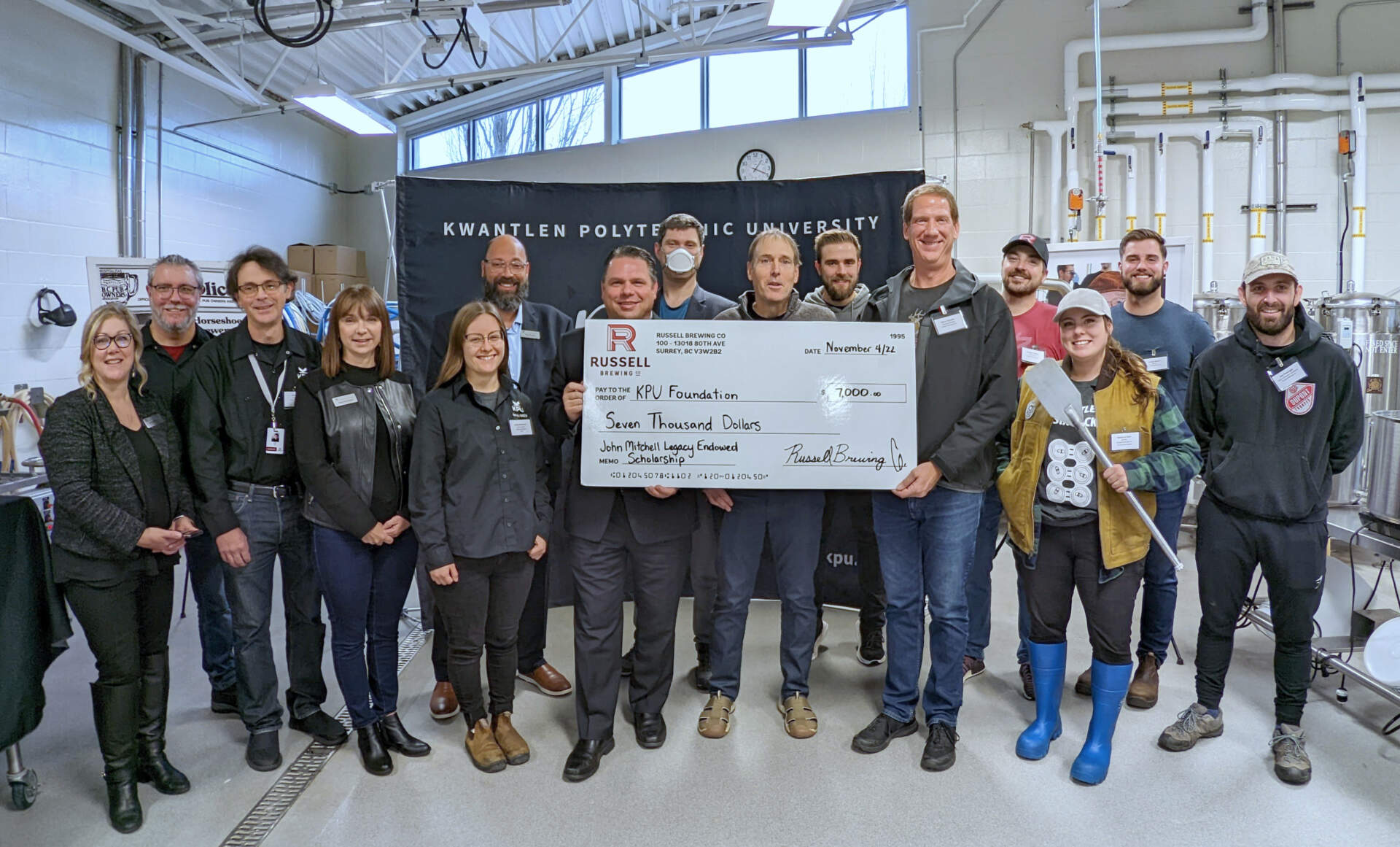 Kwantlen Polytechnic University (KPU) and Russell Brewing Co. have announced great news for the future of BC brewing education and #BCCraftBeer.

$7000 has been donated by Russell Brewing to the John Mitchell Legacy Endowed Scholarship at KPU, open to students in their Brewing & Brewery Operations Diploma program. The funds were raised from the sales of John Mitchell Signature Cascadian Dark Ale, originally launched on July 6th in commemoration of the 40th anniversary of Canadian craft beer. The contribution should boost overall Scholarship donations past the $20,000 mark and help secure its Legacy Endowment status, which has been a goal held by the Scholarship’s caretakers.

The donation was made official during a cheque presentation this past Friday November 4th at the Brew Lab in KPU’s Langley campus. What’s Brewing was on hand to record the very inspirational and successful occasion, captured in these videos and photographs.

At this point, the public may still experience John Mitchell Signature Cascadian Dark Ale on tap at Russell Brewing’s Surrey tasting room. The brew is considered to be outstanding, with Beer Me BC giving it a score of 4.4 out of 5.

LANGLEY, BC – A scholarship fund helping students in Kwantlen Polytechnic University’s (KPU) brewing and brewery operations program is getting a $7,000 boost thanks to an ale made in honour of a craft beer pioneer.

On Friday, Nov. 4, Russell Brewing Company presented the KPU Foundation with proceeds from the sale of John Mitchell Signature Cascadian Dark Ale, a Russell beer brewed in collaboration with faculty, students and alum from KPU’s brewing program. The funds will go to the John Mitchell Legacy Endowed Scholarship, which benefits brewing students at KPU.

The scholarship, a partnership between KPU and the John Mitchell Foundation, honours a man pivotal to the craft beer movement. Mitchell, who died in 2019, founded Canada’s first craft brewery, Horseshoe Bay Brewing, in 1982. The Canadian craft beer industry has since exploded to more than 1,000 breweries.

“KPU is grateful for the work of Russell Brewing and the John Mitchell Foundation by partnering with the university to make a positive difference in the lives of our students,” says Steve Lewarne, executive director of KPU’s Office of Advancement and Alumni Affairs.

“John Mitchell had the opportunity to visit the KPU Brew Lab on a number of occasions. He loved meeting the students, and was thrilled that part of his legacy would be linked to brewing education and teaching the next generation of craft beer professionals,” says Ohler.

“As one of the first 10 breweries in B.C., we understand the huge impact John had on this industry that he loved so dearly. To be able to pay homage to such a pioneer is nothing short of extraordinary. The support we received from breweries throughout B.C. is a testament to the work John did during his career,” says Darbyshire.

Established in 2019, the $1,000 annual scholarship is available to students enrolled in KPU’s brewing and brewery operations diploma at the university’s Langley campus.

The diploma is the only program of its kind in B.C. and KPU was the first Canadian institution recognized by the Master Brewers Association of the Americas for a standard of excellence in brewing education. In October, KPU brews landed three medals at the 2022 Canada Beer Cup.

“KPU students learn the science of brewing beer and how to apply that knowledge to build careers in the brewing industry,” says Brett Favaro, dean of the Faculty of Science and Horticulture. “This is a great example – students working with industry to make great beer that also raises funds for a scholarship that will help others on their educational journey.” 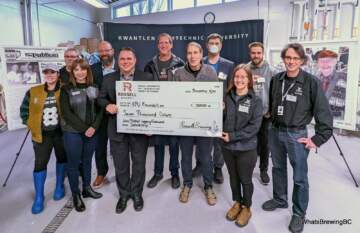 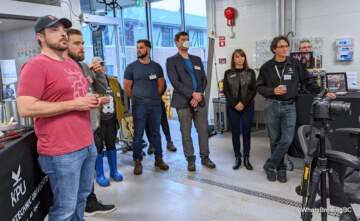 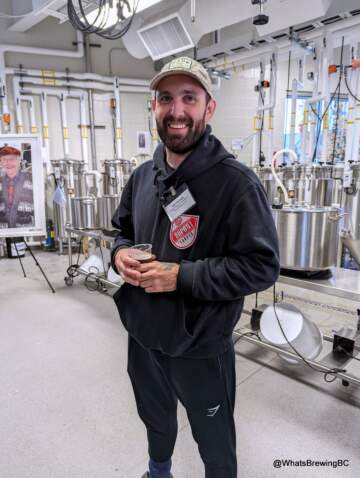 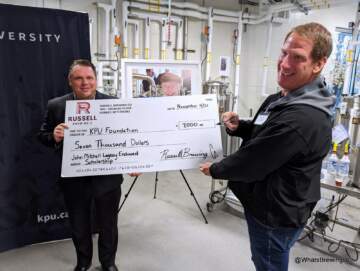 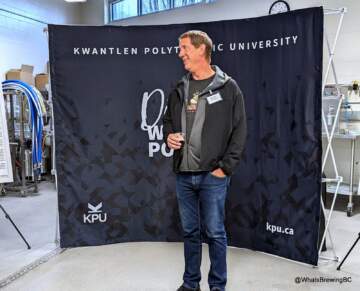 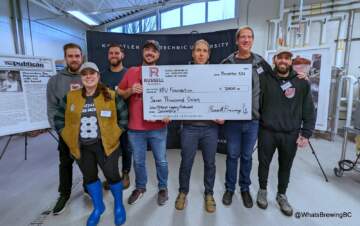 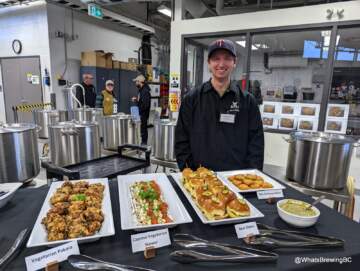 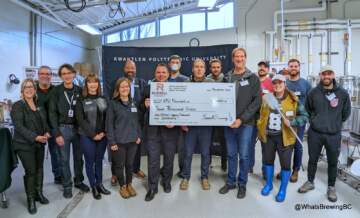 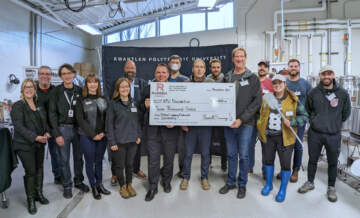 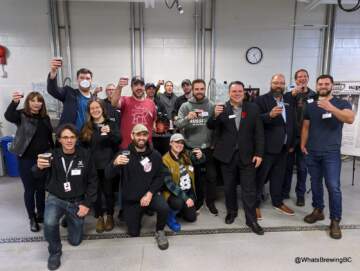 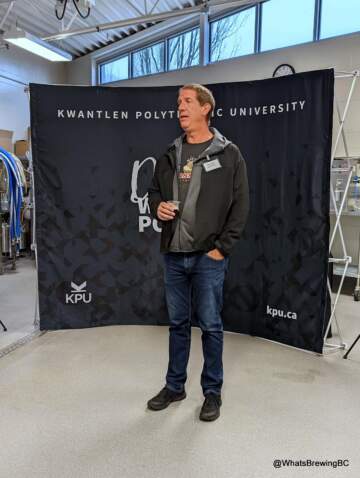 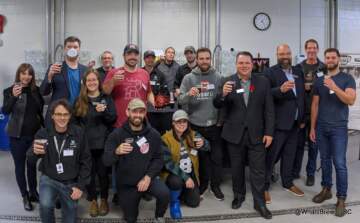 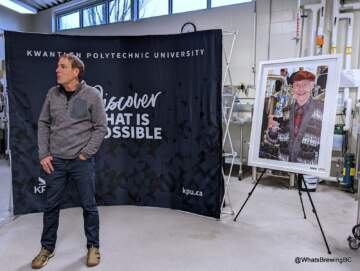 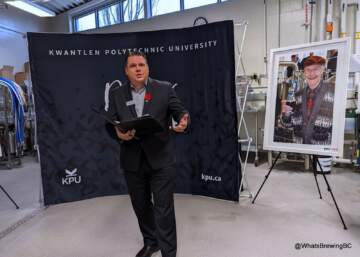 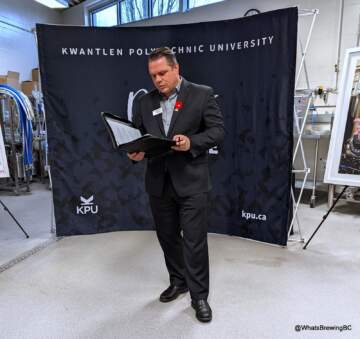 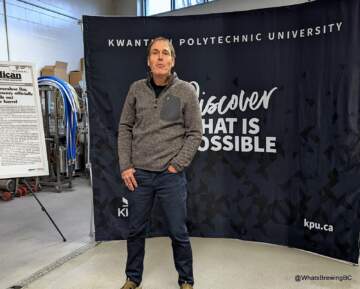 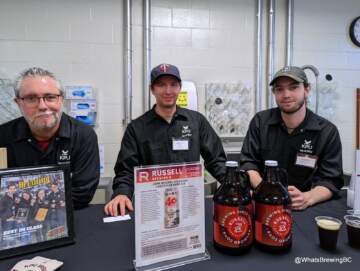