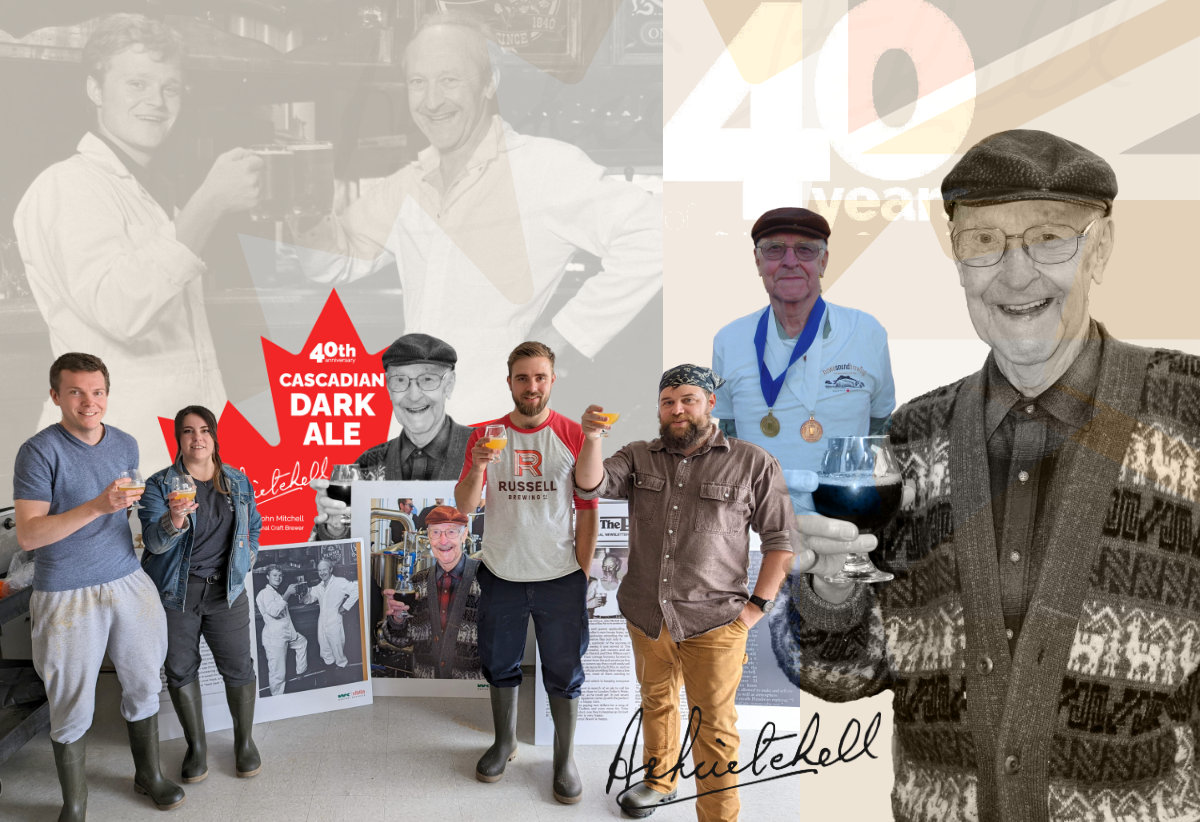 The beer has been brewed in collaboration with staff, students and alumni from Kwantlen Polytechnic University (KPU)‘s Brewing & Brewery Operations Diploma program, in order to raise funds for a cause that directly benefits the BC craft beer movement: a brewing school scholarship in Mitchell’s name.

The project was initiated by, and has the approval of, John Mitchell’s longtime associate John Ohler. Before Mitchell’s passing in 2019, Ohler was formally entrusted to act as Steward of Mitchell’s craft beer legacy. This first fundraising project is also a means of introducing newcomers to the Grandfather of Canadian craft beer.

In 1982, Alexander John Mitchell sparked a national beer revolution by founding Canada’s first craft brewery at Horseshoe Bay, BC. By spurring needed changes to legislation, Mitchell and his partners spearheaded an economic and cultural awakening in Canada’s brewing industry. From that one pioneering location, the Canadian craft beer industry has now grown to boast over 1000 enthusiastic breweries.

As of today, June 17th 2022, it has been exactly four decades since Mitchell’s first Horseshoe Bay Brewing creation, Bay Ale, was sampled by a select few at Mitchell’s nearby Troller Pub.

Next, on July 6th, it is 40 years to the day since the brewery and ale was officially launched with a ceremony at the Troller Pub, officially birthing Canada’s craft beer era. In celebration, a ceremony will likewise be held at Russell Brewing’s just-opened tasting room in Surrey.

Proceeds from the new John Mitchell Signature Collaboration will benefit the John Mitchell Legacy Endowed Scholarship, open to students in the Brewing & Brewery Operations Diploma program at BC’s Kwantlen Polytechnic University. KPU’s program was of particular significance to John Mitchell, who personally visited its Langley BC–based facility in order to meet students representing the future of brewing excellence. The current scholarship was established in 2019, after the passing of its trailblazing namesake.

“This John Mitchell 40th anniversary collaboration highlights the legacy that John created for craft breweries and brewers in Canada,” remarks Dominic Bernard, instructor and chair, KPU Brewing and Brewery Operations Diploma program. “He paved the way for the industry to become what it is today and for our students to have the opportunity to follow in his footsteps and choose a career they’re passionate about. It’s an absolute honour for KPU to be involved with this special project and exciting to see so many of our brewing alumni participate in this historic collaboration.”

With four KPU alumni and students on staff, Russell Brewing was the ideal choice to serve as home base for this special fundraising project, and was indeed recommended by KPU for the honour.

KPU Brewing chair Bernard notes, “It’s a proud moment seeing our alums at Russell Brewing lead this brew—especially Mark McBride, who developed the anniversary recipe based on John’s original recipes. We love how the industry has welcomed our grads since the KPU program started in 2014 and continues to support our students—future craft brewers—with the John Mitchell Legacy Endowed Scholarship.”

Russell’s Head Brewer Graham Kenny notes that it’s great to have the influx of young, eager and highly trained brewing students and grads from KPU. “Mark has been an amazing addition to our team at Russell. He seems like he always has his finger on the pulse and is excited to fire up the test batch system.”

Kenny continues, “Rebecca is a fantastic brewer, too. Then we also have recent graduate Mike & first year student Tom. Their well-rounded knowledge has come in handy on more than one occasion. Basically, I’m the only non-KPU member left on our team!”

Of the new beer recipe, KPU alum Mark McBride reveals that he wrote it taking inspiration from Mitchell’s ESB recipe, as well as Mount Tolmie Dark Ale from Mitchell’s time as founder of Spinnakers Brewpub. “Combining these elements,” McBride notes, “We decided it would be a cool idea to brew a CDA.”

Head Brewer Graham Kenny confirms, “We had access to John’s old brew sheets from Horseshoe Bay Brewing and had a look at his first ever brew sheet. We took notes and guidance from that in creating this beer.”

Kenny points out the use of whole leaf Cascade hops in the brew for tradition’s sake. “They weren’t the easiest thing to track down,” he shares. “I managed to get some shipped up from Yakima Chief Hops and they were fun to brew with.” No doubt John Mitchell, always a fan of whole hops, would have approved.

Pleasant aromas of roasted malts are met with floral and citrus hop character. Subtle flavour notes of chocolate and dark fruit are balanced with a full body and slight creaminess.

HOW TO FIND (AND CARRY) THE BEER

John Mitchell Signature Cascadian Dark Ale will be released in packaged format as well as on draught. A list of outlets carrying the brew will be compiled on johnmitchell.beer.

Retailers, publicans and craft breweries who wish to participate in the 40th Anniversary celebrations and support the fundraising effort may contact Scholarship caretaker John Ohler at [email protected].

A number of BC beer community members including staff at Russell Brewing Co. and KPU have volunteered their time to enable this tribute beer project. As well, Canada Malting, Coaster Factory, the BC Craft Brewers Guild, Central City Brewing, Line49 Design Group and What’s Brewing magazine are recognized for their generous contributions and support of this special non-profit project. Acknowledgements also to Spinnakers Brewpub and Trading Post Brewing for their founding Scholarship donations.

Those interested in partnering to support the current project, or sponsor a future John Mitchell Signature Collaboration Ale, may reach out to John Ohler at [email protected]. 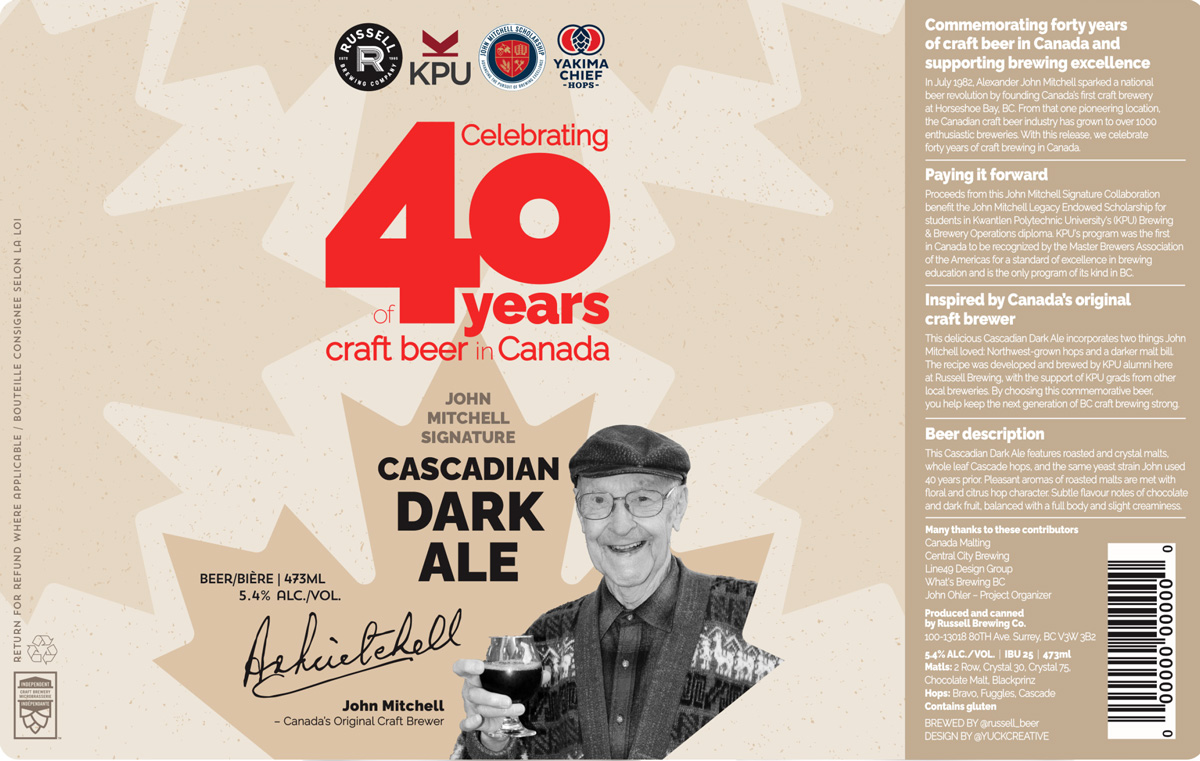 The John Mitchell Legacy Endowed Scholarship was established in 2019 after the passing of its trailblazing namesake. It is open to students in the Brewing & Brewery Operations diploma program at BC’s Kwantlen Polytechnic University. Inspired by Canada’s Original Craft Brewer, its mission is to help keep the future of Canadian craft brewing strong. Learn more at johnmitchell.beer

Kwantlen Polytechnic University (KPU) has served the Metro Vancouver region since 1981, and has opened doors to success for more than 200,000 learners. Based at five campuses across Richmond, Surrey and Langley, KPU offers a comprehensive range of sought-after programs in business, arts, design, health, science and horticulture, trades and technology, and academic and career advancement. Learn more at kpu.ca.

The KPU Brewing & Brewery Operations Diploma is the only program of its kind in BC, and Kwantlen Polytechnic University was the first Canadian institution recognized by the Master Brewers Association of the Americas for a standard of excellence in brewing education. KPU is recognized as one of the top brewing schools in North America, placing first in 2019 and second in 2021 overall in the US Open College Beer Championship. KPU was awarded Brewery of the Year at the 2019 BC Beer Awards. More recently, a student team won bronze for their Signature Series beer at the 2022 Canadian Brewing Awards. Learn more at kpu.ca/brew.

Founded in 1995, Russell Brewing Co. is Surrey BC’s longest-operating brewery. Fanatical about beer, Russell Brewing believes that passion and quality come through in the taste of their products, which are 100% natural, never pasteurized and with no preservatives. Summer 2022 marks a new era for Russell with the long-awaited opening of a public tasting room. Learn more at russellbeer.com