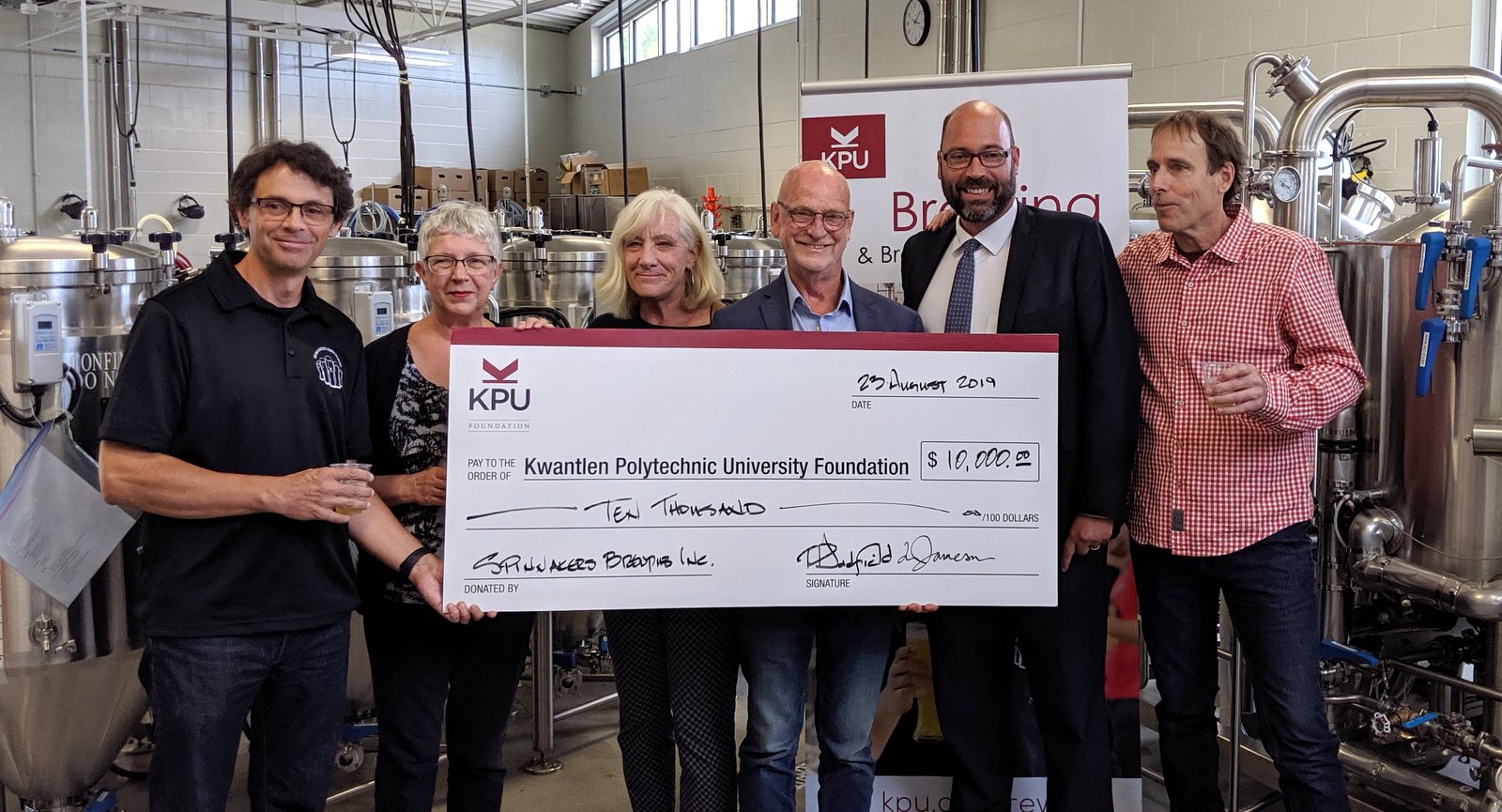 Today, Paul Hadfield and wife Mary Jameson of Victoria’s Spinnakers Brewpub made the trip to Langley’s Kwantlen Polytechnic University in order to make a special donation. The $10,000 they’ve contributed to the Brewing & Brewery Operations program at KPU kicks off a new scholarship in the name of John Mitchell, one of Spinnakers’ original founders.

Last month, a Celebration of Life was held for Mitchell at Red Racer Taphouse at which other funds were raised. John Ohler, who is spearheading the fundraising effort, is targeting a minimum fund balance of $20,000 in order to make the Scholarship a donation in perpetuity.

Mitchell passed away earlier this year at the age of 89. He founded Horsehoe Bay Brewing in 1982 and then went on to open Canada’s oldest brewpub, Spinnakers, in Victoria in 1984. Mitchell also helped establish Howe Sound Brewing in Squamish in the mid-1990s.

Brewmaster John Ohler first met Mitchell in 1982 at the age of 15.

“I started working with him when in 1996. John was the most passionate, driven, talented, and creative individuals I have ever known,” says Ohler, who is also part of the John Mitchell Foundation.

“If he did something, he did it to perfection. he took that approach with how he operated a business, cooked food in his pub, served his guests, and brewed his beer. There were no shortcuts for John Mitchell. He believed that things had to be done to the highest quality and standard.”

Spinnakers is donating $10,000 towards the scholarship. Central City Brewers donated the sale of Mitchell’s celebration of life beer and other breweries will be donating as well. The endowment will result in a $1000 annual scholarship, which will be available to students at KPU’s Brew Lab. Ohler says while many brewers are self-taught or taught on the job, Mitchell believed that a formal education in brewing was the key to better beer and success.

“John influenced generations of new brewers and craft beer entrepreneurs. He loved meeting the students at KPU. He was thrilled that part of his legacy would be connected to KPU and to teaching the next generation of craft beer professionals,” he says.

“Some of our students were fortunate to meet John on a few of his visits to the KPU Brew Lab and I know it meant a lot to them to chat with him and share their mutual enthusiasm for craft beer and brewing,” says Alek Egi, chair, KPU Brewing and Brewery Operations diploma. ​

“We are honoured to be a part of John Mitchell’s legacy and incredibly grateful to Paul Hadfield and Spinnakers Brewpub for their generous donation to the John Mitchell Foundation scholarship to help support KPU Brewing Diploma students.”

Ohler adds that he would like to see Mitchell’s name live on through KPU.

Learn more about KPU Brewing and Brewery Operations as well as the scholarships and awards offered here.

The KPU Brewing Diploma is the only program of its kind in BC and the first and only Canadian institution recognized by the Master Brewers Association of the Americas for a standard of excellence in brewing education. For more information on the program, visit kpu.ca/brew.

About Kwantlen Polytechnic University
Kwantlen Polytechnic University has served the Metro Vancouver region since 1981 and has opened doors to success for more than 200,000 learners. Based at five campuses across Richmond, Surrey and Langley, KPU offers a comprehensive range of sought-after programs in business, arts, design, health, science and horticulture, trades and technology, and academic and career advancement. Around 20,000 students annually choose one of our wide selection of programs that blend thought with action, including bachelor’s degrees, diplomas, certificates, apprenticeships and graduate diplomas. Learn more at kpu.ca.