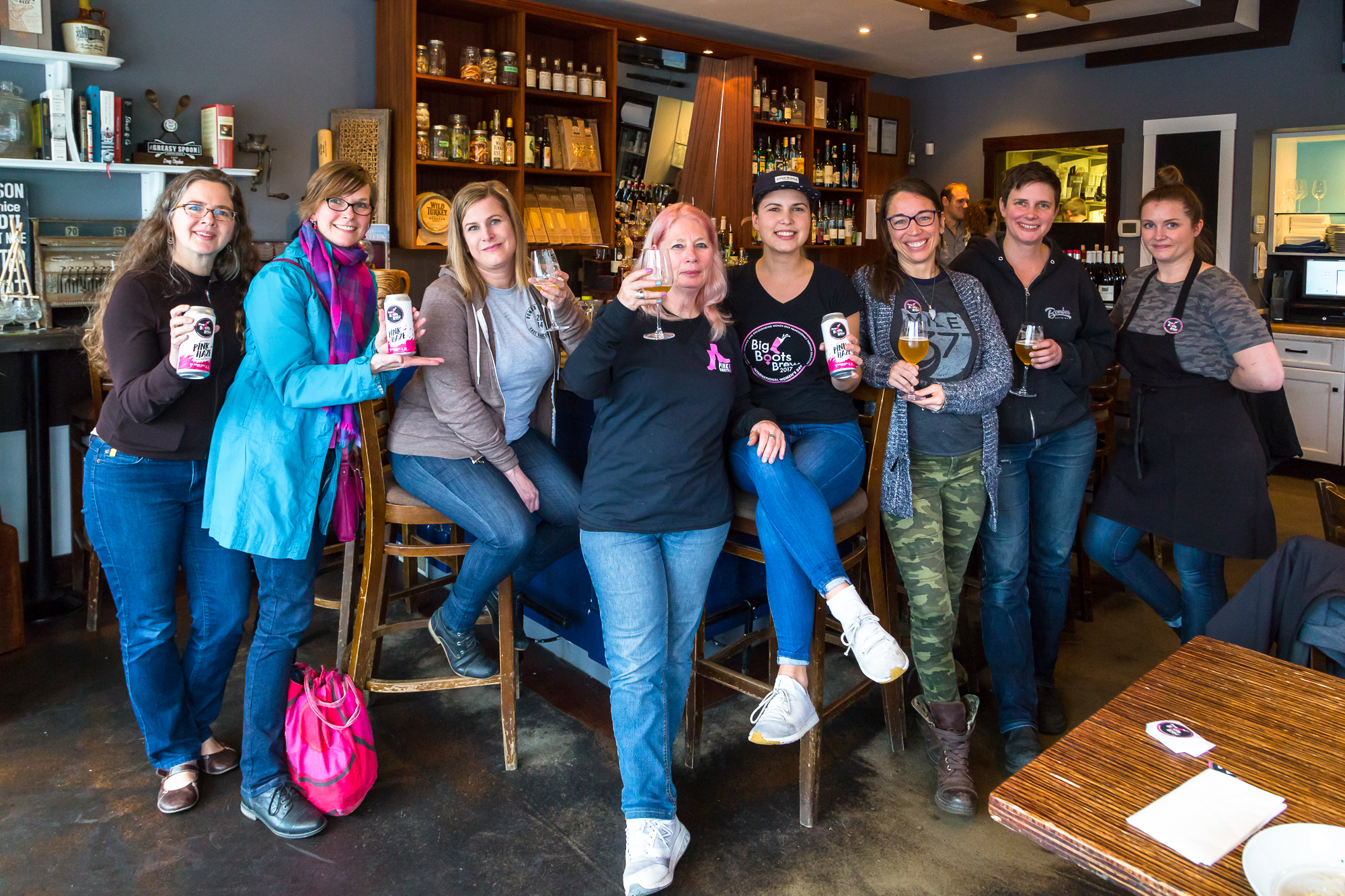 During the week of March 3 – 10, bracketing International Women’s Day on March 8, women in the brewing industry all around the world get together to brew beer. Proceeds from sales go back to the Pink Boots Society. 2018 was the fifth year of the women’s collaboration brew; I have been fortunate to be a part of the Vancouver brew for the last four years.

This year is extra special. Not only was the Vancouver brew being kegged and distributed to some of the participating brewery taprooms (Luppolo, Four Winds, Bomber, Dogwood, and Fuggles & Warlock), but, for the first time ever, the beer was also canned and will be available at retail, thanks to the support of Mile 37 Canning. As an extra bonus, this is the first year that more than one Pink Boots Collaboration Brew was created in BC: this year we had four!

WHAT IS THE PINK BOOTS COLLABORATION BREW?

Pink Boots Collaboration Brew Day was born from the Pink Boots members’ desire to take part in International Women’s Day by raising the profile of women’s roles in the beer industry. Chapters and members of the Pink Boots Society get together with supporting breweries and individuals, put on their pink boots, and brew their version of the selected beer style.

WHAT IS THE BEER STYLE?

Over the last four years, there has been a basic style with specific malts and hops to be used, but the rest has been open. This year, the only requirement was the use of a special Pink Boots hop blend created by YCH HOPS out of Yakima, Washington State: a blend of Citra, Simcoe, Mosaic, Loral, and Palisade. The styles were unlimited, demonstrated by the four unique Pink Boots Collab Brews that were created this year in our province. Now, here are those four limited-release Pink Boots Collaboration brews!

Head brewer Erin Dale chose to brew pale ale, a perfect style to show off the hop blend. The addition of hibiscus not only gives a subtle berry-fruit flavour with a hint of tartness, it also makes a nice pink hue! The flavour profile is a blend of grapefruit with a subtle hint of strawberry. The beer has been so popular that a second batch is in the works!

Assisted by the women at Barkerville Brewing, Gambrinus Malting from Armstrong, and Trench Brewing and Cutbank Brewing, both from Prince George. The label and fonts were both designed by women.

Available in 650 ml bottles and kegs. Distributed by Barkerville Brewing.

A hazy hop-driven juice bomb, Pink Haze featuring the YCH HOPS blend with copious amounts added to the whirlpool, mid- and post-fermentation, left unfiltered for your all your haze-craze needs. Fermented warm with a blend of Juice & wild Saccharomyces “bruxellensis” Trois (Sacch Trois) yeast kept things juicy with a tropical, citrus finish. Oats, flaked oats & flaked wheat were added to give a nice smooth texture and pilsner malt used for a clean backbone to let the hops shine through.

Available in 473 ml tall cans and on tap at some of the above-named taprooms and a few local restaurants. Distributed through Bomber Brewing.

Harmonia Hoppy Saison features the YCH hop blend exclusive to this project. This beer comes in at 5.8% and has a beautiful nose from late-addition hops and dry hopping. The name Harmonia was chosen to represent how brew day brought all the women in the area all together to create a delicious beer in harmony with one another. The beer is a nice blend of a traditional saison and lots of northwest hops. A perfect beer for those who love hops and even those who don’t! Sadly, not available in bottles or cans, so you will need to get out to Nelson to try this gem!

Assisted by women from Torchlight along with Art of Brewing, Trail Beer Refinery, Nelson Brewing, Savoy Brewery and some home brewers in the area.

Available in kegs only. Distributed by Torchlight Brewing.

Lead brewer Tanya Crocker chose India Session Ale for this Pink Boots Brew. The light, sessionable ale brings out the flavours and aromas of the Pink Boots hop blend that were used throughout the brew and a dry hop addition for a seriously crushable ISA. This is the first year for these breweries to get together and brew the Pink Boots Collab, and it won’t be the last. They received a huge amount of support from the Whistler community.

Assisted by women from Coast Mountain Brewing along with Brenda Miller, owner and brewer at the yet-to-be-open Pemberton Valley BeerWorks, Hunter Gather Eatery & Taphouse and The Fitz Pub, both in Whistler. 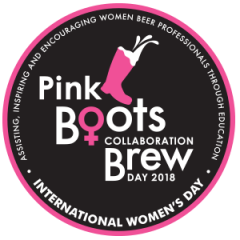 ABOUT THE PINK BOOTS SOCIETY

The idea to collaborate on a hop blend for the Pink Boots Society started with a casual conversation between the CEO and the regional sales manager of YCH HOPS. They have a common interest in supporting female brewing professionals. They connected with the president of Pink Boots, and they all got together during the 2017 Great American Beer Festival and created this year’s blend.

The blend character itself is fruity but not overly tropical, with more dominant citrus and herbal notes. The small addition of Simcoe gives the blend just a hint of old school, while others like Loral, Citra, Mosaic, and Palisade will help drive the fruit flavors forward.

All these Pink Boots Collaboration beers are available in the host brewery taprooms. Some have had additional distribution and are available in a few restaurants and private liquor stores. Go check them out!