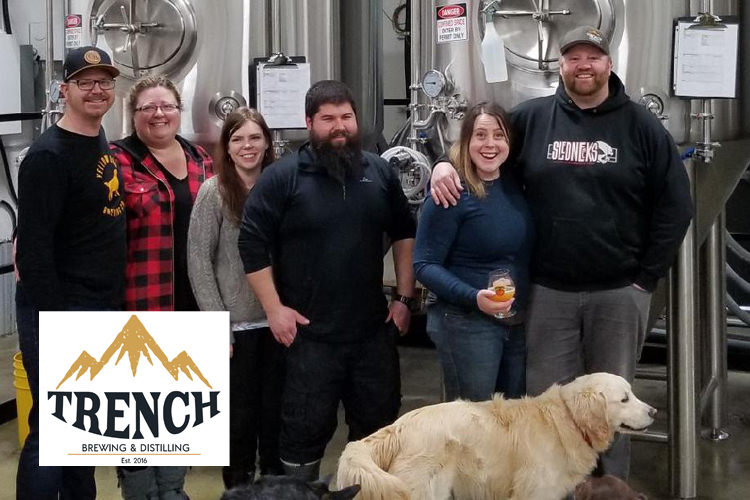 Fans of delicious BC–brewed beer are in for a treat: as of this writing, Northern BC’s newest craft brewery is switching on the “open” sign. With a beautiful cozy tasting room, wonderfully well-made beer right out of the gate, and a handful of other mad schemes waiting in the wings, Trench Brewing and Distilling is helping put PG on the craft beer map.

When my wife and I were planning our trip from the Saanich Peninsula to the city I grew up in (and hadn’t been back to in over 16 years), it was nominally to show my wife and son my home town, get in some spring skiing, and let my son experience more than the South Island’s normal two days of snowfall a year. Days before we left, I let slip that I also wanted to check out Prince George’s new breweries. My long-suffering wife could only muster an exasperated “Really?” She has yet to come to terms with vacationing with a beer nerd.

I got away for a very generous tour and tasting of the new Trench brewery. I had an extensive chat with head brewer Paul Goncalves, a former brewer at Howe Sound Brewing, as well as the four owners, Craig and Esther Schwenning and Jesse and Bailey Hoefels. The new facility, Jesse explained, had “immediately presented itself as a brewery. I could see exactly where everything would be, from the [70-seat] tasting room on.”

Owner participation in craft brewing runs the gamut from being just a signature on a cheque to being the person actually pitching the yeast. I got the strong impression that the owners of Trench are very much in the latter group. Paul is doing the day-to-day brewing, but Craig and Jesse both trained in the Czech Republic and have extensive homebrewing experience. Craig told me a lot about the brewery, down to the electrical wiring he had done and Prince George’s incredibly strict wastewater regulations.

My conversation with Esther was more about business. Asked about the difference in time and money getting the brewery up and running compared to expectations, she said, “Literally double. Double the time, double the money. Two and a half years we’ve been working on this. Despite being able to source significant savings on absolutely everything in this brewery, there has been substantial personal investment.”

One example of such savings is the 25 hectolitre brewhouse from Lighthouse Brewing. Trench wasn’t the only interested party, so the sale price could have been much higher. Also a distiller, Trench got its beautiful thousand-litre, double boiler, twelve-plate column still for a price that would make most others choke on their whisky.

“The distillery will only use ingredients sourced from BC,” said Craig. It will be a pet project when Trench can afford to devote the time and attention craft distilling requires. “The first step is to have full barrels, which we’re planning to have as soon as possible.”

Trench’s location is close to PG’s other craft brewpub, Crossroads Brewing. That might seem counterproductive, but Victoria’s Beer Mile and Port Moody’s Brewery Row have taught us that having beer destinations within walking distance of each other benefits all parties. There is a strong collaborative spirit between the two breweries, as there is throughout the craft beer industry. Remarked Craig about the relationship with Crossroads, “We’re down there so much, those guys told me how much business they were [about] to lose from us drinking our own beer [now that Trench is brewing].”

This collaborative spirit came through loud and clear in their conversations. They’ve been beating around an idea for a “Northern Craft Alliance” co-op with breweries from Smithers, Prince Rupert, Fort St. John and other towns. They would like to see Northern craft breweries ship more cheaply and widely, have greater control of their products, and source ingredients more easily. It would help Northern BC breweries keep the lights on and keep making great beer. It might also mean I could get beer from places like Trench, Crossroads, Sherwood Mountain or Wheelhouse here on the Island without the long car ride.

Asked how he thought the Budweiser drinkers of PG will receive Trench, Jesse shrugged. “People understand craft. I know a guy who is a lifelong Budweiser drinker but will still go and hunt down craft beer when he can.”

“For everyone else, there’s the Blonde,” added Craig. The Blonde ale, at 4.5% and using sweet orange peel, is intended to be the crossover beer, the beer for those new to craft. Jesse called it “crushable,” and I agree.

The brewery is named after the Rocky Mountain Trench, and all the beers have geographic names. Arctic Pilsner, named for Arctic Lake, is a crisp thirst-quencher in the true Czech tradition. According to head brewer Paul, the Pilsner has a small amount of Cara Pils malt and a huge amount of Saaz hops. I couldn’t sample the Amber, but at least I have a reason to come back.

My favorite was their stout, an impressively full-bodied, layered, balanced beer. What I sampled might be tweaked before it’s in the taps, but it had all the flavour notes I look for, almost cascading over the palate. They ‘ll have it both on and off of nitro.

As I sit on my couch in snow-free Sidney BC, sipping a non-Trench beer, I’m envious of people who live in PG. I don’t lack for great craft beer around here, but they can sit in the tasting room at Trench Brewing and Distilling and try one of the experimental beers that will change every week. If you live in or near Prince George, BC and didn’t know you were lucky, head over to Trench and let them convince you.