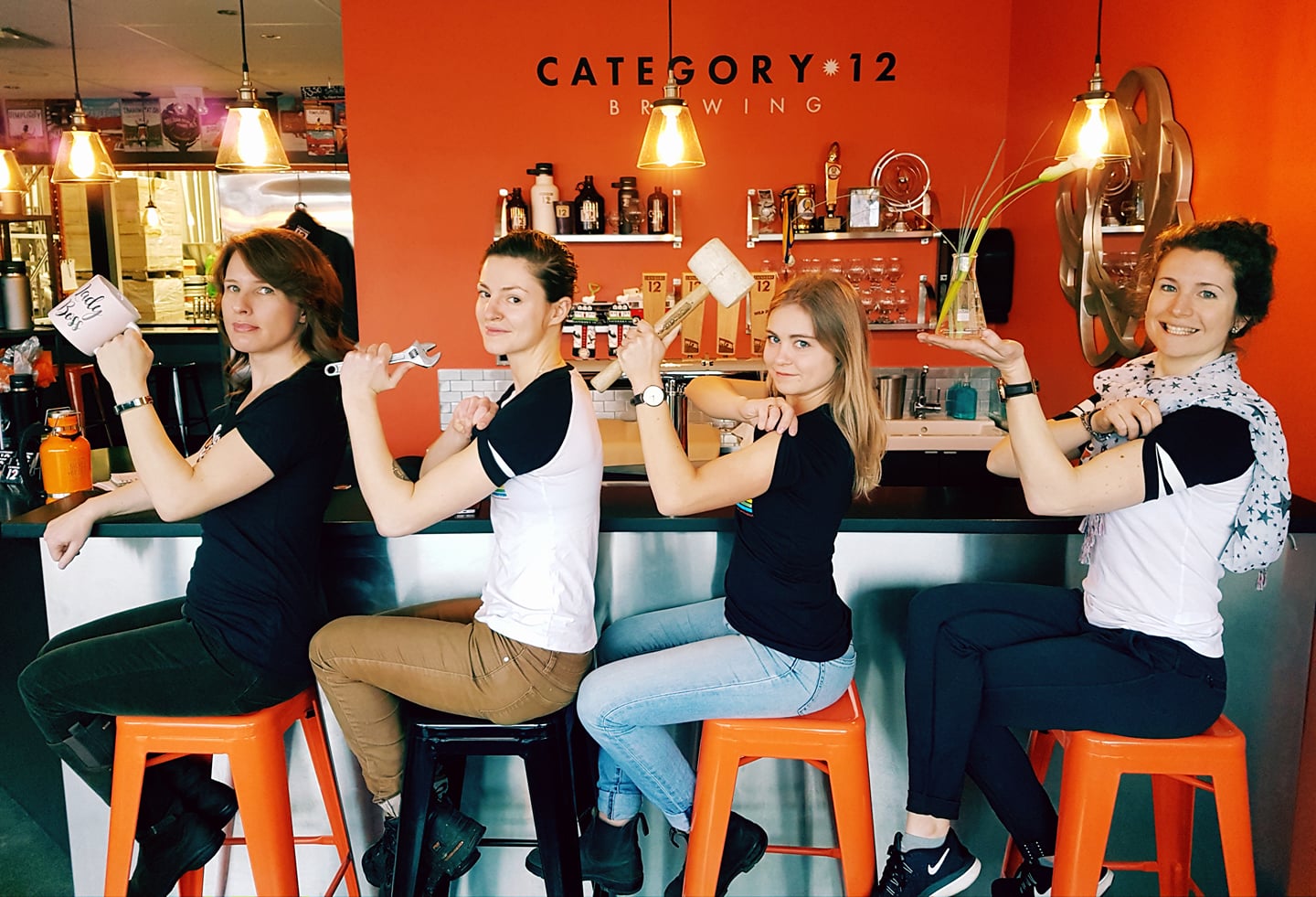 I have met Karen Kuzyk several times over the last few years but usually just to say hi, so I was thrilled when she agreed to this interview. When Karen heard that I was organizing a group to brew for the Pink Boots Collaboration brew in March, she asked if one of her new brewers, Jordyn Godin, could join us. Jordyn was a pure joy and got right into the thick of the brew, even jumping on the forklift to get the malt bins in place!

Both women bring a lot to Category 12 (where half the team is female) and to the industry in general. Recently I asked both Karen and Jordyn for their take on being a woman in the craft beer industry.

Karen: A multitude of factors! While the concept of creating our own brewery was entirely Michael’s idea, we knew that we both needed to be 100% on board. I saw the opportunity to get some much-needed validation outside of my family life, while putting the knowledge I had gained about business through my own experiences into action.

Jordyn: I became a craft beer fan upon moving to the Island right after high school to attend UVic (University of Victoria) for my BSc. I never thought I’d ever be able to break my way in with zero contacts and truly no relevant experience at the time, but after encountering Michael and Karen a few times just via growler fills in the taproom, I kind of just fell in love with them. I obviously adored their shtick, having a background in Science myself, and after graduating from UVic, it took a while to get my foot in the door. When Category 12 finally had an opening in production, I jumped at the chance and they had me in for an interview.

PEOPLE WHO GET INTO THIS BUSINESS HAVE PASSION. HOW DID YOU DISCOVER YOUR PASSION FOR BEER?

KK: I’m sure we all have passion! Our values and motivations tend to be the differentiators, and they are as individual as the people themselves. I saw getting into the beer industry as a means of creating a business that embodied a way to have (apparent) control over our personal and financial destiny, to break away from the conservative choices we had made over the last twenty or so years and start over while we still had the ability, desire, and energy to guide the path in a hands-on way.

JG: I grew up in Alberta and the only beer I’d been exposed to was sad macro brands that my dad and male friends drank at bad parties. I didn’t know there were even different varieties of beer! So when I finally discovered a wheat ale from Wild Rose Brewing that I really did enjoy, I was shocked, because it didn’t look or taste anything like the beer my dad or friends had ever tried to coerce me in to quaffing. I didn’t try many beers until my second year at UVic, when I was drawn to a Killer Bee Honey Porter. I drank the whole bomber in an hour—I loved it! After this, I was obsessed with trying dark beers from all kinds of breweries.

WHAT KIND OF TRAINING/SCHOOLING DO YOU HAVE?

KK: In a previous incarnation, I had intended to become an elementary school teacher. I’m still passionate about creating environments where children can be their best selves, and causes that support literacy, outdoor play, and the learning styles of boys in the classroom.

JG: I have found having a background in science and experience in university labs undoubtedly useful, but that’s not to say that kind of experience is entirely necessary. Michael and my co-worker Jacob trained me, and honestly it was the steepest learning curve I’ve ever been a part of. Moving from the theoretical to the practical is something that student life never really prepared me for. However, after getting the hang of the job physically, my time management and lab skills that I acquired in university have proven themselves in spades!

KK: The sheer joy of working with an amazing team on a regular basis. I am grateful on a daily basis for the privilege of working with such competent, passionate people! It’s like creating the best family in the world! It’s such a dynamic industry there can be no complacency, and this is the kind of environment both Michael and I thrive in. No two days are the same.

JG: My most favourite thing is . . . brewing beer. It’s physical, it’s gratifying, it’s science and yet it still manages to feel a bit like magic. But as a more compelling response, my second most favourite and least favourite thing about being a lady who brews beer are one and the same: the shock when I tell people what I do. They immediately look me up and down, and part of me delights in their disbelief and part of me completely resents it. My favourite game takes place at parties when the craft beer dudebros are loudly speaking over you to one another like the topic of beer is completely over your head. Eventually you get to lambaste them with the fact that brewing beer is actually something you get paid to do and they’re either in utter disbelief or very embarrassed— both responses I relish of course, providing I’ve properly let them dig their own hole.

JORDYN: WHO IS YOUR FAVOURITE FEMALE ROLE MODEL IN THE INDUSTRY, AND WHY?

Caitlyn Carlisle from Cumberland Brewing Co. Back when the thought of getting to work in a brewery was still a completely outlandish pipe dream, I saw her working in the tiny back room of the Cumberland brewery and she was the first woman I’d ever seen who wasn’t working the taproom. Who would want to hire me? I’m 120 pounds, have no experience, and I’m a girl. It wasn’t until I saw her—also a slim woman!—in her work boots back there that it dawned on me that this was even a remotely viable possibility. I’ve only met her once more since that day, when I was just starting to get on the brewhouse at C12. I doubt she remembers talking to me at all, but she’ll always be the woman who changed it all for me. Representation in the industry is so important.

KK: Just do it! It’s never too late! It’s so easy to be lulled into complacency, to make the decisions you think are right based on the values or pathways of the people surrounding you, blanketing yourself with the illusion of security. It’s good to shake things up. If I had been able to grasp how intensely satisfying breaking away from those expected norms would be, I would have done this years ago!

JG: The advice I’d give other women with an interest in craft beer and the industry that surrounds it is simple: persistence. Don’t let anyone tell you no. When people ask me how I got into brewing I tell them, “sheer force of will.” Just keep showing up to the conversation.

KK: Ha! I feel like I’m just getting started, it would be too presumptuous of me to assign that level of importance to anything I’ve done in the past! Seriously though, I think I’ve made major progress (as a recovering introvert, surprise surprise) in speaking in front of people; perhaps because I finally feel like I’m part of something that I can be proud of.

JG: My biggest achievement isn’t necessarily one specific event but rather the on-going event that I’ve been trying not to settle for anything less than what I consider an extraordinary time to be alive. Keep asking for more, keep dreaming bigger, and keep believing you’re worth the effort. I live in my dream place, with my dream people, working my dream job. If you aren’t obsessed with your life, change it.