In 1998 I purchased a condo unit. I had my first mortgage and was struggling to make the regular payments. I was living on a very small budget which meant dropping meat out of my diet for a while and not being able to afford luxuries such as beer. Pay day was when I would splurge and buy myself a 6 pack and a pizza. That got old pretty quick. That is when I first decided to explore homebrewing. I needed to find a way to have beer more often without having to spend more money.

I started by reading about the topic. As noted elsewhere in this issue, I purchased a book, Dave Miller’s Homebrewing Guide. I read it through entirely. I made some decisions about what kind of equipment I could afford and started assembling a very primitive system. I started with a 32 quart enameled canning pot. I installed a spigot on the side of it with a home-made bazooka tube inside. That was my first mash tun that I used for 15 years. I also purchased a large stainless pot in Chinatown to serve as a kettle. That pot is now my hot liquor tank. I found a maize mill missing a hopper on clearance. I bought a carboy and a plastic bucket. Finally I went to the hardware store and purchased a length of coiled copper tubing to build an immersion chiller. 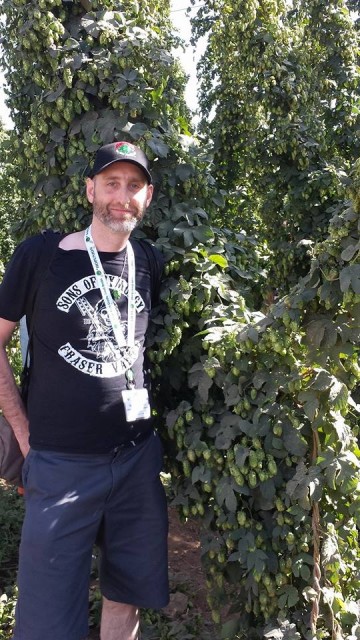 Next I went to Spagnol’s and bought the ingredients for a simple pale ale. I jumped right in and went all grain right off the bat. That beer was drinkable and I never looked back. Imperial Stouts, IPAs, Scotch ales, and more Pale ales. I started looking for more affordable sources for ingredients and found a little brewpub in North Van called Sailor Hagar’s. I visited the brewery and talked to the brewer, Gary Lohin. He sold me some specialty malts for a much better price then I was getting at Spagnol’s. I gave him a bottle of my IPA and asked him to please review it for me. I’m pretty sure he never opened it.

At this point I was quite happy that I could make delicious beer tailored to my tastes for a fraction of what I was paying at a beer store. It was time to enter a contest and share my amazing creations with the world. I entered an Imperial stout at the 2000 CAMRA BC homebrew contest. The results were announced at the GCBF several weeks later. Imagine my surprise when I didn’t win anything. It took me a while to figure out how to win a contest. To win you need to brew to style and make a solid beer. Well, that stout was far from meeting the BJCP guidelines. Fortunately, I had the judges’ tasting notes to help explain where the entry fell short.

Once I understood how to properly enter a beer in a contest and how to develop and tweak recipes I started winning ribbons and medals. Not only that, sometimes there are prizes like free malt or hops, software, shirts, glasses, and other assorted beer-related products. Not bad for a $5 entry fee. Often there
are prizes that allow you to brew at a commercial brewery with a professional brewer. Sometimes you will brew your winning recipe and it is served to the public.

Now I’m teaching others how to brew award-winning beer. I have been teaching an all grain brewing class at Beyond the Grape in Port Moody for the past two years. It is very rewarding seeing people get excited and want to share their creations.

I belong to several homebrew clubs. Fraser Valley Fermentalists, Tricities Brew Club, and Stonehouse Brew Club. I have been a member of VanBrewers in the past. I watch the facebook groups for BrewVic and Ten Corners Homebrew Club. We have had events with Royal Canadian Malted Patrol. I am aware of Brew Westminster and UBC has a club called BruBC. I recently discovered a club called Cranbrook Brewing Culture. If you are in BC and are part of a homebrew club that is not listed here please contact me or send  a message to What’s Brewing.

Your local homebrew stores and clubs are incredibly useful resources. These people have made the mistakes that you will and can help you avoid them. Most club members are open to having visitors during their brew days and will gladly show you the ropes.

My intent is to write a regular column for What’s Brewing concerning all things homebrew. I may discuss new techniques, post a recipe, notify of Homebrew events, or whatever I may find interesting at the time. If there is something you would like me to write about please let me know. Now go make some beer!