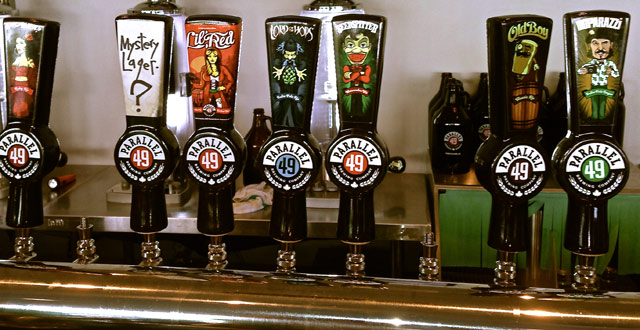 There is a new breed of craft brewery that has taken Greater Vancouver by storm. Recently opened outlets feature customer-focused tasting lounges where beer lovers can enjoy a flight of samples or drink beer by the glass, acting as “locals” in their neighbourhoods much like the traditional English pub. This model is yet to be seen in Victoria, for years known as B.C.’s “craft beer capital.”

The new taproom model only became possible in 2013 when the provincial government announced that breweries could apply for lounge endorsements that would allow them to open on-site tasting rooms, adding an entirely new retail option to their business plans. Since then, several new breweries have opened with tasting lounges front and centre, and some pre-existing ones have also added tasting lounges.

Breweries such as Parallel 49 and Bomber produce a significant amount of packaged product for liquor stores and sell kegged beer to restaurants and pubs, so their tasting lounges are an add-on to their business model, but at places like Brassneck, 33 Acres and Main Street Brewing, the tasting lounge is the primary way they sell their beer. Brassneck is the most extreme model of this: with no packaged product and only the occasional kegged beer going on tap elsewhere, pretty much the only way you can taste its beer is to go there in person.

From the consumer’s perspective, the lounge endorsement is fundamental to Vancouver’s unique beer experience. Each brewery has its own unique style: 33 Acres’ clean, whitewashed design feels like a Scandinavian café while Brassneck’s rugged wood paneling and rough concrete pillars embrace the industrial side of craft beer. Main Street’s look is somewhere between the two, with the old bones of its building, built in 1913 as part of the Vancouver Breweries complex, visible above the tasting room’s walls. The lounges at Powell Street, Bomber, Strange Fellows, Parallel 49 and Off the Rail each have their own character. Most have arrangements with food trucks to park out front; Main Street even has its own kitchen.

Many of the suburban breweries around Vancouver have tasting lounges, such as Moody Ales and Yellow Dog Brewing in Port Moody, which also feature picnic areas. New Westminster’s Steel & Oak Brewing is a popular spot for local beer lovers. Over in Burnaby, Dageraad’s cozy tasting room always seems to have someone hanging out even though it’s tucked away inside an industrial complex in Burnaby. Owner/brewer Ben Coli was not sure if it would be part of the picture when Dageraad opened in 2014, but between people working nearby, students at SFU, and others living in nearby residential neighbourhoods, the brewery has definitely proven that “if you build it, they will come.”

The brewery tasting lounge is also an ideal model for smaller communities around the province where it’s more about serving the whole community than just a neighbourhood. Cumberland Brewing opened last November with a focus on the tasting lounge as the main customer experience. It helps that the business is partnered with Rider’s Pizza next door, so that folks can order some gourmet pizza to go with their beer. Cumberland added a patio in time for summer, and now the place is so popular that virtually every drop of beer brewed is sold right there, either by the glass or in growlers heading out the door. A few kegs go to local restaurants, but mainly just as form of marketing, and the brewery has no plans to package its beer for sale outside the town.

Gladstone Brewing, which opened in Courtenay in January, has a similar setup, although with a bigger capacity, that brewery does intend to package in the future. Forbidden Brewing, also in Courtenay, is a tiny nano-brewery with a tasting room. You’ll also find brewery lounges in Tofino, Kamloops, Quesnel, Prince Rupert and Valemount.

Just not in Victoria, at least not yet. And it’s not because the City of Victoria has turned down local breweries, as some persistent rumours suggest. In fact, none of Victoria’s breweries have even applied for the endorsement yet. Until that changes, Victoria’s craft beer lovers will just have to settle for trips to Vancouver or up-Island to enjoy the experience.