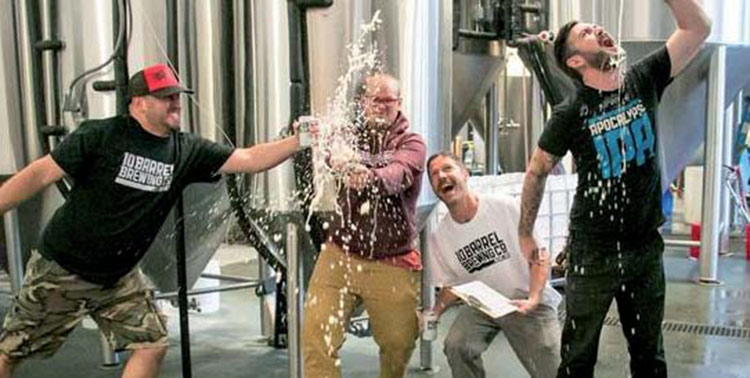 What is a Craft Brewery? Part II

Craft Brewery status has its privileges. The Oregon Brewers Festival,  got itself into a pickle this summer by attempting to curate the list of ‘craft breweries’ presenting at their annual event, which has attendance of up to 85,000 over five days. The criteria for vendor entry to OBF is apparently aligned with the Brewers Association’s definition of ‘craft brewery’, which states that “less than 25 percent of the craft brewery [must be] owned…by an alcoholic beverage industry member that is not itself a craft brewer”.Such curation is a noble ambition, but the realities of business are making it difficult to pursue without conflict. Namely, the OBF has de-listed Elysian and 10 Barrel Brewing Co. as participants due to their acquisition by Anheuser-Busch InBev, yet allowed Widmer Brothers and Full Sail to continue to attend.

Chris Crabb of the Oregon Brewers Festival says Widmer is exempt because they’re one of the festival’s three founding breweries.

Widmer’s grandfathering is a case of straight hypocrisy, because founder status is clearly a subjective decision by OBF management. (Matter of fact, Kurt and Rob Widmer were Grand Marshals of the 2015 Festival and participated in the opening ceremonies.) Full Sail will apparently be re-reviewed for inclusion next year based on its deal backed by a San Francisco-based investment firm. It will be sad if the change in majority ownership to the new “Oregon Craft Brewers Co.” causes the exclusion of a good community brewery that had always prided itself on being employee-owned.

10 Barrel, a relatively young company, provided the most popular entry at last year’s OBF 2014: a radler named Swill that was slurped up in the hot July sun that year. They did not take rejection from the followup 2015 event lightly. A major publicity campaign was quickly organized around the social media hashtag #bannedsoweparty. The story got picked up by the mainstream Portland media and got exposure in their news cycle. The somewhat subjective OBF selection process was highlighted, no doubt to the chagrin of some involved.

So do I, unlike OBF and the BA, consider 10 Barrel to be a craft brewery?

The beer itself is not a reliable deciding factor, as noted in Part I of this story. Many breweries have managed to be acquired without it materially changing their recipes or approach. Here in BC, Granville Island continues to be reasonably well respected, brews occasionally interesting beers in its original location, and attends the Great Canadian Beer Festival without fear of disqualification. 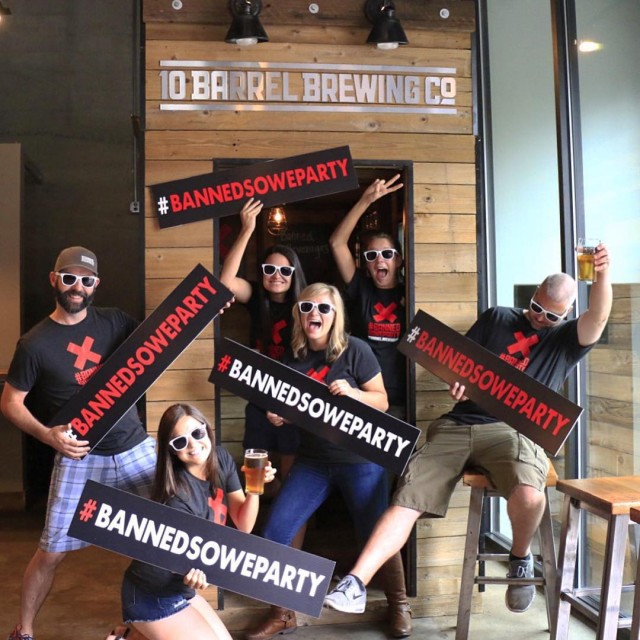 10 Barrel recently used their AB InBev money to open a spanking new taproom in downtown Portland’s Pearl district, directly across from stalwart Rogue Brewing. 10 Barrel was standing-room-only when we arrived to check it out, so we headed over to Rogue while we waited for our table. When you view the rather dilapidated Rogue building next to the state-of-the-art 10 Barrel facility, the juxtaposition between older and newer generation outlets is painfully evident.

The culture is different between the two as well. Behind the bar at Rogue, truculent middle-aged men rule their roost, dispensing service as they see fit. If you want to use a mobile phone, you need to leave the premises or be ostracized in an old-fashioned red phone booth until your call is over. Decades-old Rogue is anachronistic in this way, stuck in the values of its time.

The taproom experience at 10 Barrel was certainly more friendly. The service, unlike Rogue’s, was above and beyond the call of duty: our taster tray was comped by our friendly young female server simply because the place was busy and the tray came out late. It felt no different than innumerable other craft outlets we’ve visited, aside maybe from the gleaming new brewhouse… and we’ve seen many of those without a macro being involved. My take was that the patrons present viewed 10 Barrel as a craft brewery, and a great addition to downtown PDX.

I would have tended to be sympathetic to 10 Barrel’s plight, based on the above factors, owever, something happened along the way to change my viewpoint. 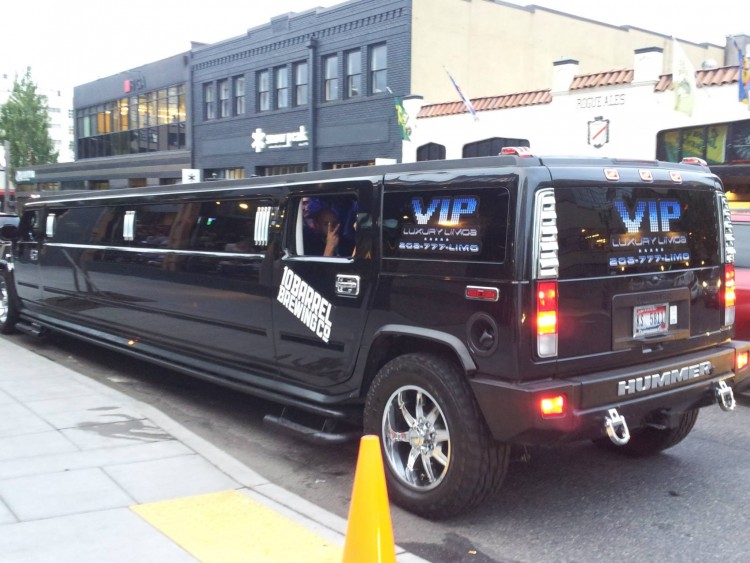 The Empire Strikes Back

When we strolled by 10 Barrel the next day, we saw the #BannedSoWeParty campaign in full action. In what their management must have felt was a brilliant move, they had procured a giant black Hummer SUV limousine with a 10 Barrel logo on the side, and were using it to ferry passengers from the Oregon Brewers Festival back to the 10 Barrel taproom. Young people hooted and shrieked from the sunroof as the limo pulled up out front. The message was clear: if you want to party, get in the limo because good times are what’s really important.

That same message was driven home by a Twitter post that featured a gratuitous shot of what apparently were key 10 Barrel personnel in full-on party mode, flaunting foam in the face of big bad OBF. Comments posted were divided between those supporting the campaign and others who pointed out that shaking hands with the devil comes with consequences.

For me, everything was fine with 10 Barrel until I saw the Bud/Coors Lite-beer-ad-styled social media posts and the contrived Spuds McKenzie partying. It really felt like a case of The Empire Strikes Back: AB InBev money being used to fund a campaign against an independent brewers’ festival which attracts mega-sized crowds without allowing mega-breweries.

Craft Beer is an ethos.

That’s what led me to conclude that the line dividing craft breweries from otherwise isn’t about numbers, or about a style of beer brewed. It’s about a mindset, and about behaviour. Craft brewing, like the slow food movement and other similar back-to-basics initiatives, involves an ethos. Stephen Beaumont defines it as (paraphrased by me): “creating beer for the sake of the beer itself, not primarily for marketing or business reasons”. As soon as that AB money got used to rent and brand a giant limo with a 10 Barrel logo, this spirit was violated. The big bad wolf just couldn’t stay in sheep’s clothing, and ultimately by its own behaviour justified, to me, the ban it was protesting against.

In Part I, I mentioned that sometimes “real” craft brewers make not-so-crafty beers. Occasionally they also act in less-than-neighbourly ways. Case in point is California’s Bear Republic, who threatened to sue our own Central City just for using the words Red and Racer in their brand, and forced them ultimately to label their US product line Red Betty. They’ve gone after others using those generic words as well, some who aren’t even in the beer business. When a brewery conducts business in that manner, they don’t meet which is “a brewer that consistently conducts itself according to the ethics and standards shared by the craft beer community”.

Fortunately, the great thing about this definition is that a brewery can always change its ways, and eventually in doing so, regain the trust of the community and be regarded as a true member of the craft beer brotherhood once again.

Will I drink 10 Barrel beers from now on?

Despite the call by many to boycott AB-acquired breweries, I don’t really feel that it’s practical to swear off all brewers who have accepted investment by larger entities. There is already a very long list, and it includes breweries that probably don’t deserve to be punished for getting financial help or having an exit strategy. I have no problem drinking Elysian or Granville Island knowing that there is a brutally massive corporation up the chain; same with standalone giant Samuel Adams and their experimental beers. I’m not aware of something specific they, have done, to their beer or to the community, to lose my respect yet.

But the next time I have a choice between buying a Bear Republic or 10 Barrel vs. say, a Central City or Rogue, I’ll think of Red Betty or the Hummer limo and my choice will be made.

The End of the Craft Beer Revolution