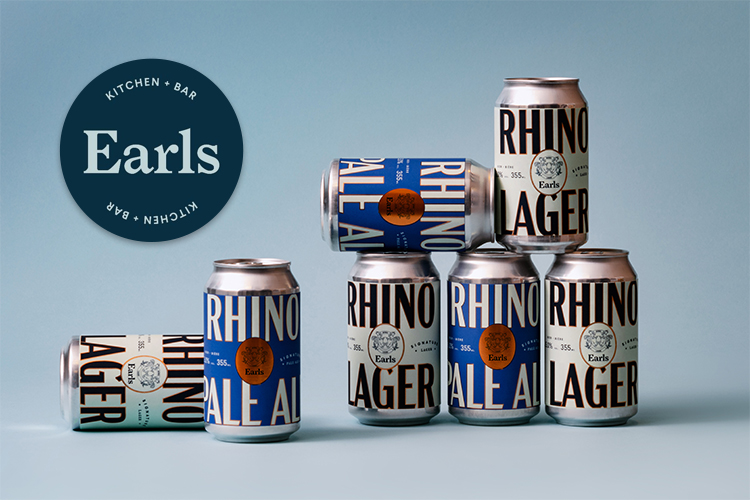 Earls Restaurant Group is introducing Earls Rhino Pale Ale and Rhino Lager in cans, just in time for Father’s Day. Produced in partnership with Parallel 49 Brewing, the popular beer will be available in 6-packs in most Western Canadian Earls locations. Launching June 16th, this popular brew has been on the Earls menu since 1984, but this is the first time Rhino Beer has been available in cans to enjoy at home.

Rhino Beer comes in two varieties: Rhino Lager and Rhino Pale Ale. Earls Kitchen + Bar has been supporting local craft breweries for over 30 years with the Rhino beer program. Earlier this year, Earls secured a partnership with East Vancouver’s Parallel 49 to produce all draught and canned Rhino Ales for Earls locations in BC, Alberta, Saskatchewan and Manitoba. This new partnership with Parallel 49 aligns the two companies’ commitment to quality and innovation and will be an ongoing relationship, with a seasonal release to come this fall.

As warmer days approach, beer lovers can look to Rhino Lager, which is known for its clean, crisp and refreshing taste, making it perfect for any summer BBQ, cabin getaway or park hangs. This pale lager is brewed with malted barley and local hops and is intentionally crushable and fresh, perfect for your next outdoor summer gathering.

Guests can order six-packs of Rhino beer by ordering online at Earls.ca. Those who order online for pick-up will receive 15% off. Feeling more spontaneous? Rhino Beer fans can also swing into their local Earls to take their cans to go, or can purchase their 6-pack after dining. Supplies are limited and available while quantities last.

Earls Restaurants Ltd. is a family-owned operation started in 1982 with its first restaurant in Edmonton, Alberta. Earls has since grown to become one of the most successful, family-owned independent restaurant groups in North America with 67 locations across Canada (57) and the US (10). Stan Fuller still serves as CEO and the brand is headquartered in Vancouver. From humble beginnings as a laid-back burger and beer joint to today, Earls offers a casual yet sophisticated dining experience within its group of independently compelling restaurant locations. While each experience is tailored to the location, Earls is committed to providing a consciously sourced, diverse globally inspired menu from quality ingredients. More information can be found at www.earls.ca or on social @earlsrestaurant.