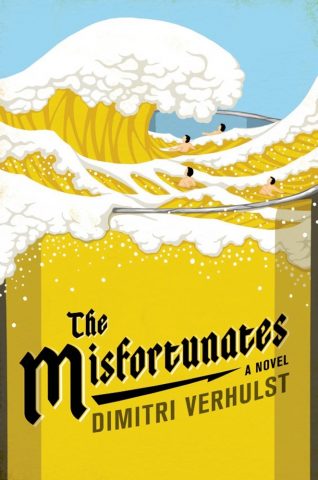 The front cover of The Misfortunates, written by Belgian Dimitri Verhulst, depicts four small, indistinct men floating in a gigantic glass of beer. As they look on, a huge wave is about to engulf them. This image is an apt metaphor for the lives of the four characters as depicted in the book. The book is a group of loosely-linked stories about being raised by a heavy drinking father and his two equally heavy drinking brothers. If you’re looking for a nice, pleasant summer beach read this might be the perfect one, provided your pleasant is black, almost gallows, humour and your summer beach is a dank, dark pub.  You can almost smell the cheap lager, some of these pages are so soaked in swill.

Interestingly, before the book starts, Verhulst denies that any of the characters are based on real people but on “an understanding of human nature”. This is intriguing since it would be very easy to read this as a semi-autobiography. For instance, the main character is called Dmitri, and there are a bunch of other details that make one think these stories are mostly based on real events. There’s also the nature of the stories, very honest looks at life, aging, dying, poverty, self-destruction and the effects of drink, that give the impression that much of the book is semi-autobiographical. That said, there is a lot to be said for reading this more as fiction.  Some of the anecdotes are so grim that it might hurt less to read them as fiction. Also, some of the stories are so absurd and/or include what could only be considered a punch line that, even if the stories are based in reality, there is clearly some fictional manipulation going on.

One important question, at least for this column, is the big one of, “Does it drink?” (i.e. can or should you have a beer in your hand while you read it?). I found this book works both ways, with or without a beer. In general, the beer-soaked stories seem to alternate with non-drinking related stories, maybe to give the reader a chance to recover. In many ways, this book is relating a lifestyle or cultural way of life that might be lost to us, that of the male-centric heavy-drinking pub culture. In many ways Dmitri’s father and uncles, at least in how they drink, remind me of my own father and uncles. Nostalgia is too kind a word for a generation of absent husbands/fathers but yet it does provoke something to remember those long jovial hours in the pub. Mostly though, as I sipped on my beer (‘cause I’m no guzzler) and read these sometimes outrageous drinking stories, I felt glad I wasn’t going to wake up with a hangover. Some of the drinking described in this book just sounds like a lot of hard and painful work, which might be why it’s more enjoyable to read about it than to experience it.

Verhulst is a solid writer whose major strength in this novel is his ability to create strong emotional effect. One can read many novels and feel almost nothing, ever. In The Misfortunates Verhulst is able to manipulate his stories into creating powerful emotional resonance, from laugh-out-loud humour to a sincere melancholy, specifically at the mental deterioration of his grandmother. This is a rare skill, not only to provoke one emotion in a reader but to then create a completely different one in the next story. This book might be dark at times but there has to be something said for this much unflinching truth about life. The Misfortunates is an undeniably powerful, well written book with loads of emotional punch that might be even be more powerful if the reader can relate more closely to the tiny figures shown on the cover.

As a post script, there was a Belgian movie made. It is a fairly faithful adaptation that unfortunately loses most of the humour and affection, specifically in the characterization of the father, who is portrayed as violent, abusive and selfish. It is quite somber and doesn’t drink at all, in my opinion.