Vintage Beer, by Patrick Dawson, came along at the perfect time for me, with a half dozen or so of my cellared beers getting close to the year-old stage. My first experience with aging beers, maybe something a few readers can relate to, was because of an unfortunately underattenuated home brew. In my case it was a sherry-like sweet Imperial Stout (If I recall correctly, its final gravity was somewhere around 1.028). Fresh, this beer was barely drinkable and then only if the drinker was really determined. Three years later though, the sherry sweetness had mellowed, as well as the alcohol burn and the harsh burnt roastiness. It was almost the beer that I had originally imagined when brewing it, maybe even something more. 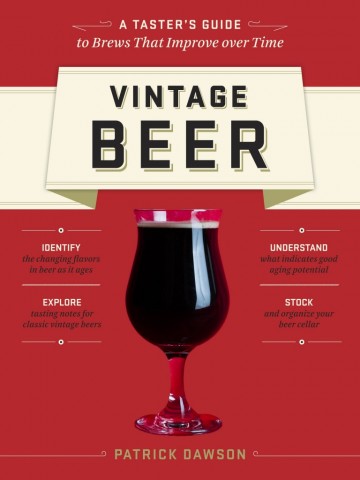 Thanks to Vintage Beer I now understand why that overly sweet Stout might have been the perfect candidate for cellaring for the first time. This was due to many features, such as being dark, malty, high in alcohol and had high levels of residual sugar. If you’re curious about why these features and others make a beer a good candidate for aging, Dawson’s book can explain it better than I can. Choosing a good candidate to age is just one of the things Dawson explains about cellaring but it’s an important one. If you’re thinking of starting or in the early stages of cellaring this book can save you a lot of time, money and disappointment.

Using my Stout as an example, dark beers age better than light and most hops (except those high in beta acids) don’t age well. So if you have a closet full of IPAs that you had hoped to age you might as well get to it. High alcohol (over 8%) and with some residual sugar to keep the yeast busy is also important. Dawson also points out other features to look for, as well as a more detailed, technical explanation of why it is so. The book then goes on to the styles that age the best, including English and American Barleywines, Imperial Stouts, Belgian Quads, Flanders Red and Browns and Gueuzes. He then goes on to selecting and managing your cellar, again giving important information that could save you from a cellar that does more harm than good. He also includes tasting notes for some common, easy to find beers that have good aging potential and a listing of bars that specialize in vintage beers.

The central question might be why age beer? Most beer are designed to be drank fresh and are better for it but in my short experience there is something about a well-aged beer that is unlike anything you can get in a fresh beer. It’s not just flavors that aren’t usually present; it’s an integration of flavors into something truly refined and sometimes profound. A beer might actually become less complex but much more elegant and more drinkable when aged. It is also a whole new country to discover in the geography of beer, like homebrewing or food pairing. Or maybe it might be better compared to the growing of your palate; in the same way learning about sours or cask ales enhanced your beer knowledge and appreciation. It’s a whole new area of beer to explore and one, as I can attest, that will be impossible to turn away from. Now that I have tasted some well-aged beers I cannot imagine not aging beers in some fashion.

Sometimes aging a beer like my Stout can make a beer better but more often it can change a good or great beer into a different good or great beer. It’s similar, if I can be so crude, as bumping into that older, but still gorgeous, woman that you haven’t seen in years. The fact that you experienced both makes it that much more special. It’s not the fact that brewers need to brew the best beer to start with, as most try to do, it’s that the best beer in the world might have to be aged to be so. Westvleteren 12, or any number of great beers, might be an example of this.

Vintage Beer, as far as I know, is the only book of its kind and indispensable to those aging beers. The amount of experience and knowledge Dawson has crammed into this small book will have you sipping a completely unique experience in no time.