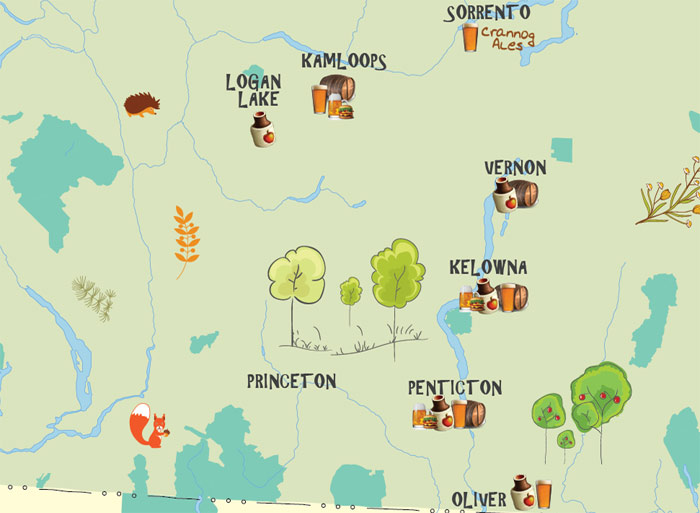 A few years back, I consciously made the choice to “stay-cation” in my own back yard. I tailored my jet-setting ways into a lower fossil-fuel-consumption, higher-economy-boosting and British-Columbia-packed exploration of what I truly love: craft beer and my Mother: Nature.

Spending summers during the latter years of high school on Sproat Lake in Port Alberni, watching the most amazing water bombers scoop and fly, while jumping off 80 foot cliffs, really kick-started this romance with BC travel. Leaving Vancouver (where I was born and raised) to make something of myself in the capital city of Victoria, I set off, after high school graduation, to pursue one of my greatest loves: Marine Biology. Who says Orcas and craft beer don’t mix (tell the folks at Vancouver Island Brewery they don’t, and see if you get off The Island)!

Victoria is where I met a few of my most inspirational, knowledgeable role models and lifelong friends; this is also where my induction into the world of craft beer really began. Salute, ! So, based on past experience, I knew that the Island and Coast are beautiful. But what other vacation options were there?

Well, enter the deserts, rivers, mountain-scapes and rolling green/gold valleys of the Thompson-Okanagan: heart, soul and even the stomach of BC. That’s the place to go to discover what people of the land do, and how they do it. First stop: a tubing trip down a wee, wild river in the back country around Spence’s . Warning: it’s not recommended for those whoare not half orca or river dolphin.

Spence’s Bridge is the junction where the mighty Thompson and Nicola Rivers meet. Despite being arid desert climate, it is also nestled in one of the most bountiful food-, wine-, and (I say) beer-producing valleys of BC. So if tubing down some wee white water doesn’t get you salivating, the bursting array of berry, fruit, veggie and dairy farms and orchards (paired with the vast pastures and clean roaming 4-hoofers) just may. (If NONE of that appeals to you, perhaps you should check your pulse—and note that zombies don’t have one).

A little farther up the pioneer trail (as in North) is a sweet spot I hope to one day call my summer home. This little golden nugget—or Craft Haven as I see it—goes by the name of Salmon Arm, and it’s the jewel of the Shuswap. Home to the northernmost tribes of the Great Salish Family, Salmon Arm was encountered by white settlers building the Canadian Pacific Railway, circa 1888. Not far from there, Salmon Arm became a bustling hub of farming, logging and dairy.

With young craft-loving women, men and families fuelling a growing population, Salmon Arm is building a strong agricultural-tourism economy that BC needs. While the government is closing schools in Vancouver, they’re building and opening ones in Salmon Arm. This tells me one thing: future development and growth = economic boom. The difference is that it’s being created from  inside the jewel as opposed (strongly) to the outside forces that have warped Vancouver. The artisans and craft guilders that have been moving up here are currently affecting the way business and economy can be melded together harmoniously to create an even stronger force that is local and very open to perspective.

Speaking of perspective, thank you for letting me share mine. Here now are some websites to help get you started on your next “Stay-cation” in our Interior backyard. Keep in mind that there is something for everyone in Salmon Arm and the Thompson Okanagan—EXCEPT zombies.

Sheridan is a long-time craft beer enthusiast and member of the Vancouver BC craft beer scene.