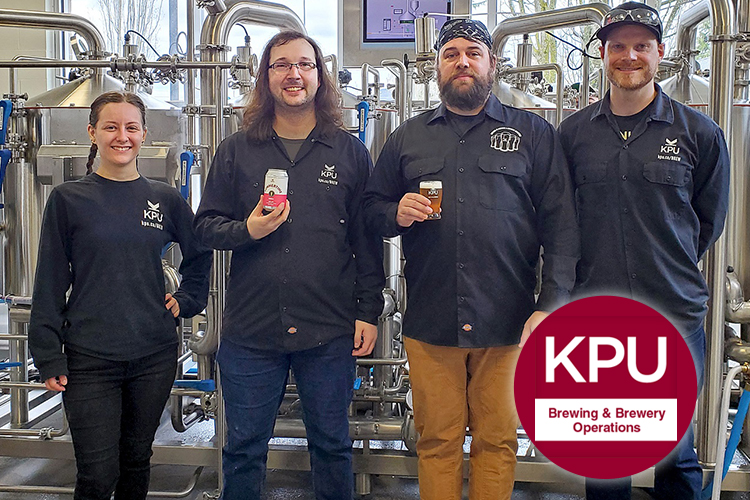 “We’re extremely proud of our brewing students and instructors,” says Jeff Dyck, pro tem dean, Faculty of Science and Horticulture. “This is a significant accomplishment for them to win an award in a national industry competition and recognition of their education, hard work, and creativity in their craft.”

Mike Patterson and Michael Hodgson created Summertime Witbier as their capstone project in the final term of the two-year brewing and brewery operations diploma, and brewed it again with instructor Jon Howe specifically for the CBA submission.

“It’s exciting to see the impact of what we’re teaching, and that students are creating professional-quality, award-winning beers using the skills they’ve learned in the KPU brewing program,” says Howe.

Summertime is a refreshing witbier that gets its smooth body from the addition of wheat malt and oats, while coriander balances the flavour and adds notes of citrus. El Dorado hops add fruit flavours and aromas making this a thirst-quenching beer for a warm, sunny day.

“My brewing partner, Michael Hodgson, and I created Summertime Witbier as a refreshing, easy drinking beer that’s appealing to a variety of people with different tastes and preferences,” says Patterson.

“I learned a lot of technical skills, especially quality analysis/quality control in the program, which my classmate Mike and I applied to our signature beer,” says Hodgson.

The Canadian Brewing Awards uses blind tasting to judge the quality of Canadian-made beer from breweries of all sizes in 58 categories. There were over 1,600 entries received overall for the 2022 competition.

Summertime Witbier is available to purchase for a limited time in six-packs of cans or in growler fills at the KPU Brew Lab at KPU Langley on Fridays from 1-6 p.m. It will also be on tap at the KPU booth at the Brewhalla Beer and Music Festival in Fort Langley on May 21.

Learn more about KPU’s diploma in brewing and brewery operations.